They party, you get the hangover.

The higher up the sociopolitical-economic ladder you go, the less the consequences of Marxist ideology are felt. Eventually you reach a level where you find the actual Marxists behind the entire movement, whom we can term "the elites."

That crowd never feels the effects of their worldview because they are, well, elite. They have enough money that their societal destruction never impacts them personally. Their own power and wealth insulate them from the devastation going on below them.

The law of the jungle is never more realized than by those who run the jungle. So much for "equality" among all the inhabitants of the jungle. The three council members justified their actions, saying first that they had received death threats (although they never produced any proof or filed any police report to back this up) and second that the personal round-the-clock security was only temporary.

No word from them on when the clock would stop, of course. A word to the council members: Everything on earth is "temporary" — even life.

Let's shift gears from the political establishment to the educational establishment. The former hippies of the 1960s, who are now frizzy-haired, hippie professors, went from the streets and Woodstock straight into the classroom lecture halls and, on the blackboard, started drawing up a "new society."

Their nutty ideas and theories on human population growth, climate change and so forth have produced successive generations of idiots who took the scribblings on the blackboard and began making them reality in the culture, through the media and courtrooms and politics.

The Marxist elite have enough money that their societal destruction never impacts them personally.

Of course, the educational elites are perfectly fine with watching America burn because they all have tenure. So they are all insulated from the rioting devastation and meltdown of the family, brought about by their aggressive push of birth control and abortion and queer studies programs. As an aside, the generations of shock troops they churned out were each saddled with enormous amounts of student loans — $1.5 trillion and counting.

Media elites — entertainment types included, likewise — sit in their anchor chairs night after night fomenting revolution in the streets, having been perhaps the greatest Marxist tool in bringing the nation to this point by lies and misinformation. But again, the rising waters of unrest don't get sufficiently high to reach them atop their broadcast towers and behind the walls of their Hollywood mansions.

What all these Marxists share in common is a worldview that embraces sexual immorality and advances it. They themselves are great participants in this world — be they active homosexuals, or married and divorced so much they have revolving doors on their bedrooms, or so many shacked-up situations that the tabloid headlines can't keep up with who is living with whom these days and who is which one's baby-daddy.

Again, they all have enough money to weather whatever temporal storm results from their love of immorality. But that's not true of their fans, or of the students of the nutty professors or those who are so braindead they actually vote the Marxist leaders into power.

Not only are their souls wrecked, as is also the case with the elites, but so are their bodies, which is what the elites are exempt from. If the elites have children all over the place, they make enough money to pay the child support. If they divorce and remarry over and over, they can afford the alimony. Drug habit? No problem for them. Two hundred grand for a month in private rehab is pocket change.

As the floodwaters rise, those at the lowest level are the ones who are swamped and drowned. The sexual revolution was a Marxist idea. It has almost completely destroyed America. It's killed over 60 million citizens, kept a third of U.S. blacks trapped in poverty and failing schools, resulted in a drug-addiction and homeless problem there is no answer for. But again, none of that impacts the Marxists. They are completely immunized from it all.

Now, when we turn to the U.S. bishops, we see the same thing — an embrace of the sexual revolution beginning in the 1960s and the catastrophe in the pews as a result. In societies where the Catholic Church enjoys a visible presence and even some influence, however the Church goes the culture will follow.

The leaders in the United States in the 1960s and '70s — men like Detroit cardinal John Dearden and Chicago cardinal Joseph Bernardin — embraced that revolution. But unique to the Church elites was their already-present, just-below-the-radar embrace of homosexuality within their own ranks.

Why would any bishop in America really care about the demise of the Church? The answer — they don't.

That evil set the stage for a watering-down of doctrine, a denial of the teachings of the Church in essentially all areas — an emasculated presentation of the Faith that has produced a cadre of effeminate men who have no love of the Church and no supernatural faith. They care about being liked and being the center of attention. In the process, they have lied and stolen and covered up the rape of tens of thousands of teenage boys.

And just like their counterparts in the rest of the Marxist elite, they are immune from the consequences of their evil — at least in this life. The lawsuits? It's not their money, it's your money. The cratering numbers in the pews? They have access to millions of dollars in endowments and investments — again, your money.

They will never go hungry, which is obvious, looking at more than a few of them. They will continue to go on vacations that the laity cannot afford. They will have "meetings" in the most lavish, expensive hotels they can find. They will jet all over the country to this gathering or that, and every bit of it will be with your money.

Some of them will engage in sex with each other, or hired call boys or look the other way when they know their cleric buddies are involved. They will all agree to present a united front on their "care and concern" for the victims of their sex abuse — again mostly homosexual sex abuse. They will tell us that their "thoughts and prayers" are with them.

But they will continue to milk the flock for billions in annual fundraising campaigns, although that at least does seem to be drying up a bit. None of them will take ownership of the evil they have brought down on the Church. They simply attempt to appear "holy" by rattling on about the Marxists' holy trinity of immigration, climate change and racism.

And none of their exploitation of their sacred offices, none of the consequences, will ever impact them personally. That's why they keep doing it (like their buddies in the rest of the Marxist-elite crowd do): they never have to pay the piper. You do! They get a free ride. That's what makes them elite. They party; you get the hangover. 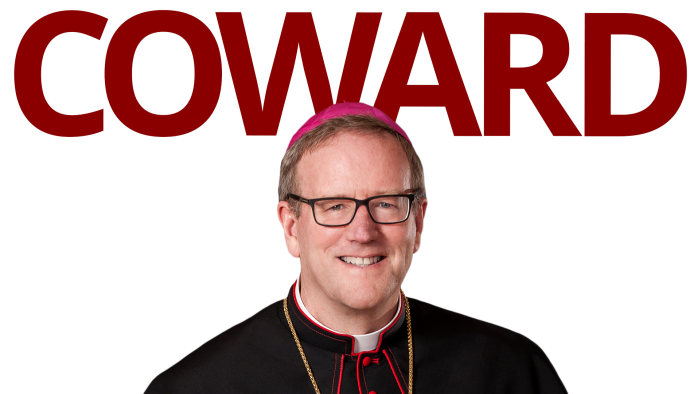 Coward
They do not care for the Church, only for themselves.