And they hate Trump.

My oh my — there is nothing formerly hidden that is not being revealed, is there? First, let's give credit where credit is due. It is Donald J. Trump who has caused this sea change in American politics (and all the ensuing fallout).

Mr. Trump goes to Washington and blows it up. As his daughter said last week while introducing him before his acceptance speech, "Washington didn't change Donald Trump. Donald Trump changed Washington." He certainly did change it. He made all the phonies expose themselves — no easy task that.

If you want to see the real face of your enemy then keep pushing their buttons until they blow up and become enraged. Well, that is exactly what the "button-pusher-in-chief" has done with the Marxists who used to be very sneaky and quiet hanging out in the shadows doing all their damage.

All the disguises have been dropped because Trump has become the supreme "troll," and his trolling has pushed the Marxists into an absolute, unhinged rage. And we're not just talking about the Nancys and Chucks and Jimmys of the world.

We're talking about all their aging Woodstock, boomer, hippie pals who — like a swarm of termites — have slowly and little by little eaten away at the foundations of not just America but also the Church. For decades, Marxist-minded, pro-homosexual, virtue-signaling, faith-hating men have been ordained to the Catholic priesthood and have busily gone about their demonic work of destroying people's faith.

These social justice warriors, Marxists all, are swarming around the Catholic priesthood to a degree that is both revolting and astounding at the same time. Take, for example, Fr. Kenneth Boller, a Jesuit (of course he's a Jesuit) at the homosexual parish in Manhattan, St. Francis Xavier.

At a Mass last Sunday, this priest had the gall to inflict his Marxism and communism-inspired race-war creed on those at Mass. That's revolting. Not just because it's promoting class warfare but because the sacred is being profaned to advance the cause of Marxism.

And yes, if you were thinking, "What are pictures of George Floyd doing on the altar?" that's how bad this substitute morality has become — even substituting God for man, which, of course, is the point of Marxism. But the vomit spewing from Catholic sanctuaries doesn't end there in Manhattan.

It's men like you and your gay-friendly bishop who have destroyed this nation with your watered-down, middle-of-the-road, seamless-garment feces.

Let's shift to Scranton, Pennsylvania, where registered Democrat ("Party of Death") bishop Joseph Bambera promotes the downplaying of Catholic teaching in a number of areas in a number of ways. For example, Fr. John Polednak (who is an episcopal vicar and close with Bambera) deliberately mixes both sides of the abortion issue to arrive at that they are both wrong.

Uh, excuse us Father, but when it comes to slaughtering children in the womb, yes, it is that simple. And how dare you stand in the vestments of the high priest and sully His teaching by pretending that people who fight to defend the most innocent, defenseless of human beings don't really get it in the same way the child killers don't.

You (and many like you) are a filthy, rotten disgrace to the priesthood — as well as your bishop and others like him who are enemies of Christ. Have some damn integrity, and leave the Church in the body since you've already left it in the soul.

It's men like you and your gay-friendly bishop who have destroyed this nation with your watered-down, middle-of-the-road, seamless-garment feces. That entire seamless-garment rot, the idea that all life issues have the same weight, was foisted onto the Church by a homopredator — satanic Cdl. Joseph Bernardin of Chicago.

And it continues to be poured into the minds of millions of Catholics by similar men like Chicago's latest cardinal, Blase Cupich, who, again, abuses his office by putting not having a job on the same level as being sliced into pieces and sucked out of the womb.

These men are devils in robes — every last one of them. And they are legion. Literally. Here's another one who at least has some degree of integrity to say what he actually means, which is that abortion is okay. Fr. Paul Garrity of Boston caused an uproar on social media when he posted that being pro-choice (AKA in favor of infant slaughter) is okay and that Catholics should vote for Joe Biden.

Only after the uproar was Cdl. Sean O'Malley forced to step in and slap him on the wrist and say priests have a duty to uphold the teachings of the Church for the laity. Duh. And if they don't, they should be excommunicated because they are Marxists. More to the point, however, they are in league with Satan because they promote the lie.

Telling a publicly pro-abortion priest he shouldn't say that on social media is like taking the knife out of the hand of a serial killer standing over a bloodied corpse and saying he shouldn't stab people but then letting him go. This spiritual insanity in the Church has got to be opposed in the most certain manner that it can.

These Marxist clerics have burrowed into the very marrow of the Church's bones, and they are everywhere destroying souls. In fact, destroying souls is their only purpose for existence. That's why they won't leave the Church. Their collars give them access to souls they otherwise would not have.

These diabolical clerics, these devil priests, have grabbed hold of nearly all the real estate the Church possesses.

And that reality speaks volumes about the men who leave them in power, continuing to give them access to souls. What about these bishops and cardinals? At some point, it has to be concluded that they agree with their priests' actions and motives because they do nothing to stop the spiritual carnage.

And moreover, their refusal to act is not just a neutral action. It is a positive act of spiritual destruction. To not stop an evil you can prevent is to be complicit in that evil. These wicked clergymen are legion in the Church because this has been the plan all along: Quietly invade and tip the scales, and keep tipping the scales until they weigh in favor of Marxism.

Then, when the moment is right, strike. So far, they have been able to do much damage without revealing themselves. And then, along came Trump. The entire Marxist Left — in D.C. and the Church — collectively exploded, unmasking before they had originally planned.

Remember, there's no reason to go to open war when you can simply keep advancing and conquering everything in sight without firing a single shot. These diabolical clerics, these devil priests, have grabbed hold of nearly all the real estate the Church possesses.

The resistance, authentic believers, have been pushed back and back and marginalized and demonized and surrounded as this pack of wolves moves in for the kill. And it was all possible because those wolves were disguised as sheep. Trump came along and ripped off their wool, revealing their fangs. 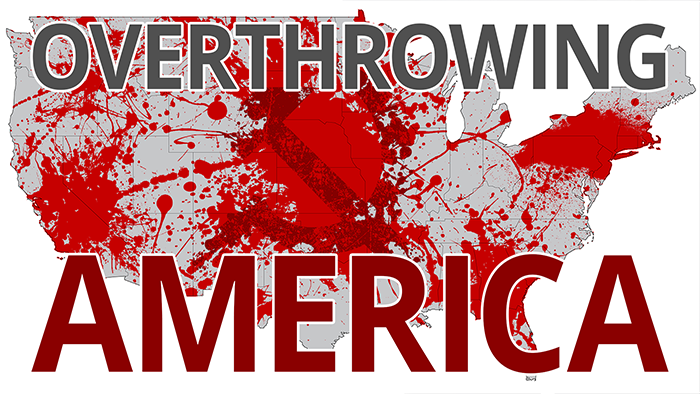 Overthrowing America
A century-long plan coming to its fullness.