Actually, it is more massive than you think.

Shortly after the news broke about Theodore McCarrick in June of 2018 that he was a serial homopredator, the modernist spin machine went into overdrive covering its tracks. In a stunningly audacious interview at the annual Knights of Columbus convention that summer, Cdl. Donald Wuerl, who turned out to be the frontman for the cover-up, totally attempted to deflect when questioned by another liar in a collar, Fr. Thomas Rosica.

For the record, the truth of both these men has been fully revealed. Rosica being a serial plagiarist is now in "ecclesiastical Siberia," where he should have always been, and Wuerl was essentially embarrassed into stepping down after his role in the cover-up. But life being what it is, Rosica gets banished and Wuerl collects a couple of million dollars a year from the archdiocese of Washington, D.C. The interview, however, revealed a lot more because Wuerl signaled in that interview to his brother bishops to hold the party line and do or say nothing.

When it came to homosexual bishops or cover-up bishops, all of this was to be kept "in-house." That summer was a total revealing of the corruption in the hierarchy — from McCarrick and the Pennsylvania grand jury report, to the original Vigano testimony where, for the first time, the presence of an active, wicked, homosexual cabal was outed as having a stranglehold on the Church.

If knowledge were not king, the evil bishops and their cowardly counterparts would not go to such great lengths to deprive you of it.

But to Wuerl, who had been a master of deceit his entire time in robes, this was just another opportunity to get control of the narrative by saying the issue went back "decades and decades" so there was no need for him to resign. Wuerl, with his serpentine demeanor, went on the secular media tour, continuing the cover-up not only of himself but of all the other bishops involved in this filth — just like so many other cardinals in the Church whose resumes are replete with degrees in lying, deceit, deflection and falsehoods.

To dive a little deeper into the "decades and decades ago" fabrication, if that is the case, then why was a Brazilian bishop just relieved of his duties for pleasuring himself on a video feed? Why was a Michigan priest, trained at Sacred Heart Seminary here in Detroit just a few years ago and touted as a "model seminarian," just arrested and charged with child sex trafficking? Why was the highest-ranking priest in the United States, Msgr. Jeffrey "Grindr" Burrill, just caught making hundreds of hookups for homosexual activity? Why is the North American College in Rome currently being sued for homopredator behavior on the part of the vice rector who mysteriously just resigned out of the blue?

Included in that suit are more than 30 U.S. bishops who, according to the suit, covered it all up and were completely nonresponsive to the pleas of a seminarian being railroaded by Cdl. Timothy Dolan of New York. And that Brazilain bishop, prior to his unfortunate video display, had been twice reported to the Vatican for theft and having a homosexual lover. Of course, nothing was ever pursued.

It's becoming commonplace now in the Church that if you do not have electronic recordings of the actual crime or sin, the bishops investigate themselves and then clear themselves. For example, Bp. Richard Malone of Buffalo is no longer bishop not because he refused to answer questions we and others put to him about his cover-up of sex abuse by Buffalo clergy, but because he was secretly recorded on audio by one of his own priests admitting his scheming.

Likewise, in Crookston, Minnesota, Bp. Michael Hoeppner is gone now because he was captured lying on video during a deposition. And while there wasn't specific video or audio evidence with Wuerl, there was a paperwork trail that came to light that proved he too, as Abp. Vigano said, was lying through his teeth.

Civil suits, criminal charges or video/audio proof are the only things that the "transparent, always want to dialogue, apologetic" bishop crowd ever respond to because only then is their hand forced. Of course, all this begins with knowledge, meaning the Catholic faithful must first understand precisely who and what they are dealing with: The hierarchy is an international homosexual crime syndicate that destroys anyone and everyone it can to secure its money and cover its active homosexuality.

The hierarchy has been aligning itself with the party of death, the communist Democrats, for decades because that party has been funneling them loads of cash every year to help destabilize America. The bishops steal the faithful's money from the collection basket each Sunday and steal it again from their taxes every year. It's quite the racket, in fact. You get zillions of dollars from people you have fooled into thinking you're trustworthy and then you owe an accounting to no one — until you die, of course.

And even now, in light of all these revelations, a huge number of Catholics are still in the dark because so few people are actually telling you all this, least of all the Catholic establishment media who also profit from all this evil, however pious they may present themselves in matters strictly theological.

Church Militant has been informing you of all this corruption way before it was fashionable. As we learned of the total depravity and depth of the evil the hierarchy engages in, we committed to exposing everything we can because, at the end of the day, it stands as a roadblock to innocent souls flailing about in an ocean of cultural wokeness engineered by the bishops in cooperation with the Marxist Democrats.

The bottom line to this Vortex is that knowledge is king. If knowledge were not king, the evil bishops and their cowardly counterparts would not go to such great lengths to deprive you of it. They never reveal anything unless they are forced to by a judge or by other circumstances.

What is needed right now is more knowledge on the part of the faithful so that they can spread the word and take action, demand change, look for opportunities to sue these monsters in miters, get the secular press to do stories on them, and just be relentless, pounding, and never stopping — just like the hierarchy has been with you for decades in covering up the truth. In other words, hound these men — but you need the knowledge to do that.

That is why Church Militant is excited to announce that beginning on Tuesday, Sept. 7, 2021, we will be expanding our nightly news coverage to now incorporate The Download discussion immediately following it. Secondly, we will be airing this all-new Catholic Info Hour each weeknight from 7 p.m. – 8 p.m. ET. (This is a change from the current 6:30 p.m. ET time where we bring you just Evening News live. Now it will be Evening News and The Download as a full one-hour live presentation beginning at 7 p.m. ET.)

The Catholic world needs a single, reliable point of knowledge and information that has no constraints.

The staff has been in meetings and planning sessions and deeper discussions for weeks now, and we are getting our final game on by rearranging shifts and personnel responsibilities to bring you the most informative, no-holds-barred, honest, trustworthy news and discussion show in the entire Catholic world.

Sorry EWTN, CNA, Register, Relevant Radio, Ave Maria Radio and the like, but the rest of you are just not trustworthy in discussing the current crisis in the Church. You are personally invested in keeping your mouths shut. And, as we have said for years, that's the price you have to pay for your lack of independence. You are too closely tied to the criminals in the hierarchy, and, no matter how you slice it and dice it, you are compromised. Period.

There are simply some subjects you are forbidden from covering, but the problem is that it is precisely those subjects that are at the heart of the crisis. The Catholic world needs a single, reliable point of knowledge and information that has no constraints. That, ladies and gentlemen, my fellow faithful Catholics, is the Catholic Info Hour, debuting live on Church Militant on Tuesday, Sept 7, 2021, at 7 p.m. ET.

Thank you to all our Premium Members and supporters who make the ever-expanding Church Militant footprint possible. And, for the record, that's six million viewers per month. Thank you, and be sure to mark your calendars for the debut of the Catholic Info Hour. 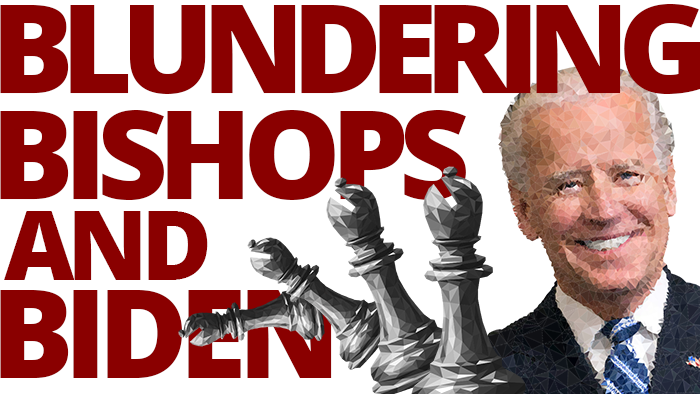 Blundering Bishops and Biden
They're made for each other.