As the hypocritical, double-standard, unsubstantiated, convenient, 11th-hour "news" erupts about Supreme Court nominee Brett Kavanaugh having been allegedly engaged in a drunken groping session at a high school party, President Trump's pick is probably wishing that Pope Francis was the judge and not the Democratic-controlled media.

Why? Because, unless it's a minor — and, in this case, it was two minors — the media doesn't care, and neither does the Pope.

That's why both the Pope and the media have never said or done anything about McCarrick until news broke that it was a teenager he assaulted in the sacristy of St. Patrick's Cathedral 45 years ago. But all the dozens and dozens of seminarians — men, meaning McCarrick is a homosexual predator — both Pope Francis and the liberal establishment media give him a total pass on.

In fact, Pope Francis actually resurrected his practically dead career after McCarrick lobbied for him at the conclave. In fact, Joseph Tobin and Blase Cupich owe their red hats to McCarrick whispering in the Pope's ear, which means, of course, that those two men should lose their red hats because the recommendations for them came from a man who raped seminarians at a beach house that the Church paid for.

They knew it; they all knew it, and yet, zilch happens, until news of a minor being assaulted makes it onto the front pages — then it's "hold the presses."

The media keep their collective mouths shut about anything that mentions the words "homosexual" and "predator" in the same sentence — that would be bigoted, after all.

And so does Pope Francis, except Pope Francis apparently takes it a step further and just doesn't say a word about any of it — "not a single word," unless its to slam the victims and call them names — then he has plenty to say. And here we encounter a common link between Francis and the media — their respective handling of anything which sullies the sterling reputation of all things gay.

In the case of the media — since in the world, the overwhelming majority of sex abuse charges and cases — more than 80 percent — are heterosexual in nature, the media has a field day exposing them, sometimes true or not, substantiated or not. The homosexual assault cases, which are considerably fewer — eh, not so much info coming about them.

But in the case of in the Church, where the vast majority of sexual assault cases are homosexual — more than 80 percent — we hear nothing from the hierarchy, minors or adults. Now isn't that strange? Yea, not so much.

The number of homosexual men in the clergy — deacons, priests, bishops and cardinals is staggering — and too many of them have grown up in a culture where homosexuality among the clergy is complete acceptable.

One Detroit priest who is gay told us here at Church Militant that during his time in seminary — again, here in Detroit in the 1980s — they were flat out told by faculty that having gay sex was fine, just keep it discreet because the people in the pews weren't ready to hear any of that yet. The entire clerical culture, as a whole, accepts sodomy as at least a non-issue, and many actually promote it.

So for any thought of real reform occuring, the question needs to be asked, well, who exactly would lead the reform? A vast number of "reforming" clerics are themselves compromised by being gay with many acting on it — so it won't come from them.

And right now, they are the ones in power. And even if some of the men are not actually gay themselves, they owe their careers to the homosexual network and are simply too scared to do anything — so strike two on any real reform.

This is why Pope Francis could just so blatantly tell the Dinardo U.S. delegation last week that there would be no investigation. He might as well have thrown them out of his office, and in a sense he did. He took weeks to respond to their request for a meeting to talk about convening an investigation.

On one level, even making the request demonstrates the depth of the naivete by some senior clergy about just how deep and wide the homosexual collective is in the Church. And again, the nexus between Francis and the liberal media will prevent this story from going any further or gaining any more traction "out there."

Brett Kavanaugh would probably already be sitting on the Supreme Court right now if it had been a male he allegedly sexually assaulted.

In fact, news that he did something gay would probably have resulted in an actual recommendation from Pope Francis' Vatican — and the media would have dutifully ignored the story.

Maybe Trump should tweet that Kavanaugh is secretly gay — that will calm the storm brewing around him.

The media are ginning up a controversy around Kavanaugh for the same reason they won't seriously report the crux of the matter against McCarrick — both strategies help destroy the moral foundation of Western civilization, which is the Catholic Church. And in this pontificate, they find almost total agreement with all the Pope's men.

Pray your Rosary every day. There are some things we can do as laity, and on that score, we must do all we can. But there are limits beyond which we have no authority.

But the Mother of God — who was the first member of the laity — the first to literally receive the Word, she does enjoy a great deal of authority, even over corrupt diabolical clergy and their allies in the media. Pray your Rosary — no excuses. Pray your Rosary. 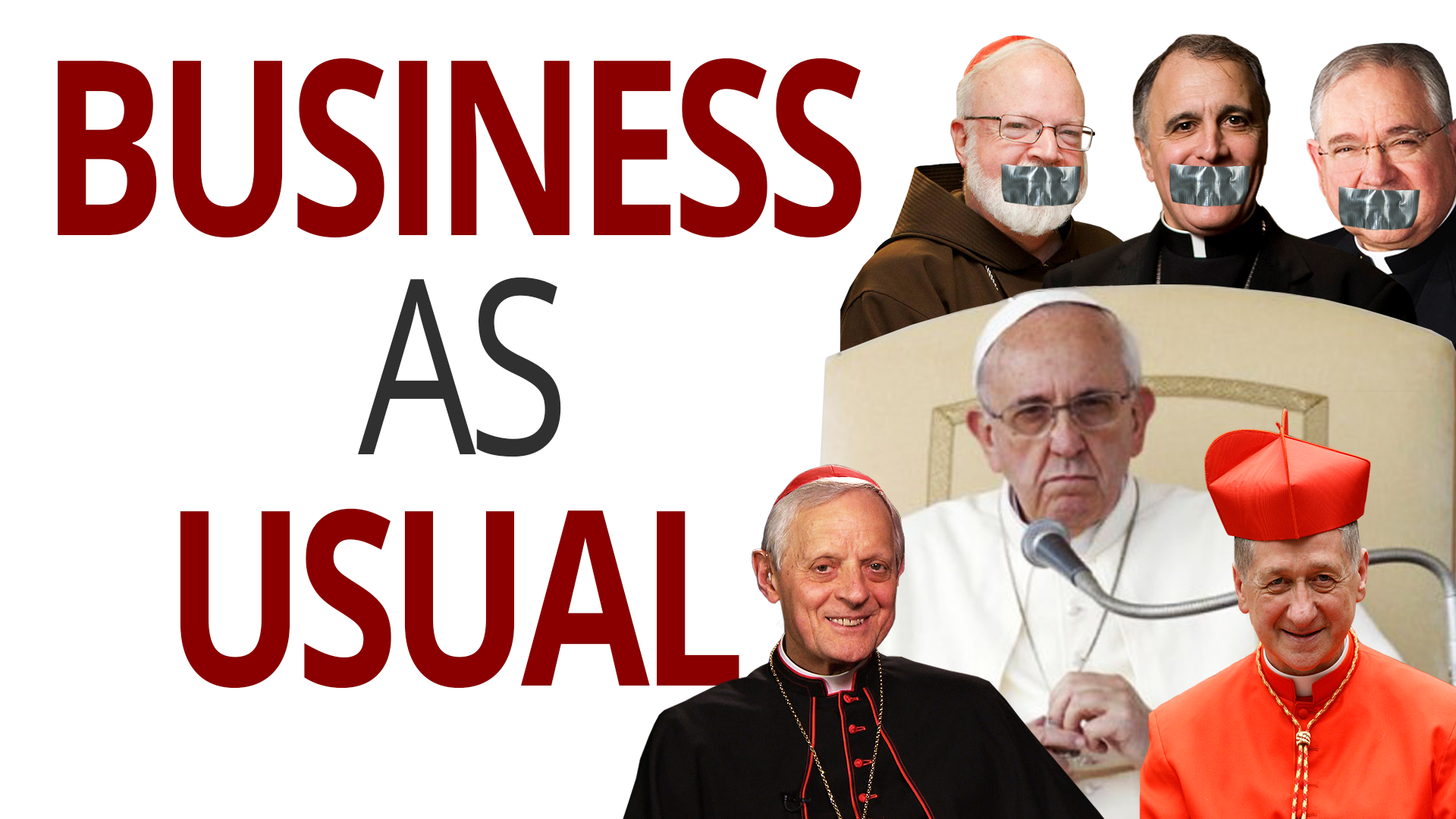 Business as Usual
Pray. And be silent.