An 'anonymous' source says so.

Is Theodore McCarrick dead? Church Militant yesterday received an anonymous letter with a New Jersey postmark on it stating just that.

First, here is the letter, in its entirety:

Here is a tip of the day for you. You have been played for fools by the bishops of Florida and elsewhere. Theodore McCarrick died on Tuesday, October 15, 2019. You are trying to locate him! He is in a cemetery in Hays, KS. He is buried under a modified name.

All this happened with little or no notice from the media. This is news known to a few. Break it. Or disregard it altogether. You are wasting your time in Florida. Who did the funeral prayers? The most liberal bishop in the far southwest of the US, known for its fine weather... October 18. Some of us were there.

First, Church Militant receives all sorts of tips on all sorts of stories. Until we can verify them, we would never report them. And for the record, we are not reporting that McCarrick is dead and has been secretly buried in Hays, Kansas.

After thoroughly checking every possible angle and source on this we can report, it appears to be not true, even in the slightest. Some of the timeline in the letter doesn't seem to correspond with on-the-record information.

For example, the Fidelis Friary in Victoria, Kansas where McCarrick was last known to have lived reported to media that he had left around Christmas time on his own and that they are not responsible for tracking his whereabouts. Obviously he couldn't have left at Christmas if he was already in a grave two months prior.

So the letter is wrong, or the friary is lying — but we're not sure why the friary would lie.

Likewise, again after thorough vetting with various officials and funeral homes and cemeteries, and police and public records, and medical examiners, etc., nothing has been discovered by us that would suggest this letter has a shred of truth to it.

So why are we telling you about it?

A couple of reasons. First, to show how someone or someones might be trying to steer the McCarrick story from behind the scenes and influence coverage. Interest in this story is intense and intensifies every day that passes that the Vatican does not release its investigation.

McCarrick remains — to this day — an enigma, and no one in the hierarchy has come forward publicly to reveal what they know about his lifelong evils, in which many of them were participants.

It would be unthinkable that various members of the McCarrick inner circle would not want to know where he is in case he would come forward and spill the beans on them.

It's safe to say that some would, in fact, prefer that he be dead and take his secrets to the grave. Others might even assist him to an early grave.

McCarrick was at the center of decades of crimes and cover-ups on a gigantic scale, and not a few prelates know that McCarrick knows.

The second reason we are telling you about this anonymous letter is the damage that this kind of news — if and when it begins to circulate — could inflict on McCarrick's surviving victims.

Imagine for a moment that this homopredator had entrapped you in his snare for months or years. You are suffering the silent agony of his predation and are reminded of it even more pointedly now as news of his whereabouts and the Vatican's delay keep making headlines.

There's something a bit twisted about not feeling any sympathy for the survivors of this former cardinal who molested and abused countless boys and young men.

And there's something further twisted about wanting to deliberately spread disinformation about one of the most closely followed stories in the Church — where loads of people have an intense interest in wanting the full truth to come out, and many others have an equally intense interest in keeping that truth from ever being revealed. 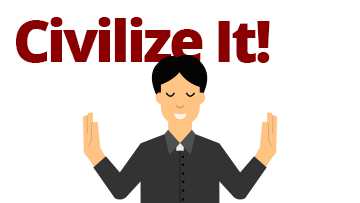 Civilize It!
End the hypocrisy first.