In fact, this past Sunday, Father's Day, ironically enough, was the four-year anniversary of the official and public revelations about Theodore McCarrick.

McCarrick was the most powerful cardinal in the United States and one of the most powerful and influential in the world. When news broke that he had been accused of sexual abuse during his time as a priest in New York, media reports — both Catholic and secular — exploded.

It was the Summer of Shame for the Church, but it also turned out to be a summer of vindication for Church Militant, who had been reporting on this filth within the hierarchy for years while being attacked left and right for it and largely written off.

While we aren't happy that all this is true, we are certainly happy that it has all come out. The bottom-line result of all of this has been a meltdown of trust in the hierarchy and, frankly, that should be the response. As a whole, these scoundrels possess no supernatural faith and lead souls to Hell.

While we aren't happy that all this is true, we are certainly happy that it has all come out.

But, of course, everything is a process, even damnation.

When the news broke from the archdiocese of New York that a former altar boy at St. Patrick's Cathedral was accusing then-Fr. McCarrick of having groped him in the sacristy before midnight Mass, the "I knew nothing" machine went into overdrive. Various cardinals and archbishops, many of whom were advanced by McCarrick, suddenly became the least aware males on the planet.

Kevin Farrell claims he couldn't believe his ears. Leading the charge was the charlatan who had replaced McCarrick as archbishop of D.C., Cdl. Donald Wuerl. He, too, had never heard anything of any of this at any time. And his response was simple: "Trust the bishops."

Except, of course, he had heard of all of it. Then, as the initial report became more widely discussed, more information started pouring out. The diocese paid for the infamous beach house on the Jersey Shore where McCarrick routinely took one more seminarian than there was the correct number of beds for, so they ended up in his bed.

This went on for years and everyone knew it, even some of the bishops who reportedly dropped in for a little fun themselves.

Then, further reports indicated McCarrick's romps had produced a number of secret settlement payments where insurance companies had been involved. Not too long after that, the hideous and revolting story came to light about James Grein and McCarrick's decades-long abuse of him, having gotten to first know him by cozying up to the family when James was still young.

McCarrick had gotten to know the Grein family because of his high school days at Fordham Prep in New York. For the record, McCarrick was a model student and even a student leader at a previous New York high school, Xavier, where yearbook photos obtained by Church Militant show all that.

But after two full years, he was expelled in the fall of his junior year in 1946 and then reemerged at Fordham Prep in the fall of 1947 before graduating in the spring of 1949.

But in between being expelled from Xavier in the fall of 1946 and reappearing at Fordham in the fall of 1947, a full year went by, and no one seems to be able to give any explanation of where he was or what he was doing during that year.

Fordham was an extremely prestigious school, as was Xavier, and it is very unlikely that a poor, no-name student who had been expelled from one would be admitted to the other unless he had someone influential promoting him.

During McCarrick's high school years, Cdl. Francis Spellman was the archbishop of New York. Spellman was so influential and feared that his nickname was "The Powerhouse." Speculation is rampant among those with more than passing knowledge that he was an active homosexual and that, somehow, he and McCarrick encountered each other during McCarrick's "missing year," and it was Spellman that got him enrolled in Fordham.

In either case, it was Spellman who eventually ordained McCarrick for the archdiocese of New York in 1958, thus setting in motion one of the most notorious cases of clerical abuse of both minors and seminarians in the Church's history.

But what catapulted the infamy of the McCarrick case to its current level isn't so much his crimes, for surely there are many in robes who conduct their lives and careers the same way, but rather the extensive cover-up of his filth by so many fellow clerics.

McCarrick rose to power through a scheme of bribes and blackmail, as well as likely communist influence during another "missing year" when he ended up in St. Gallen, Switzerland.

It was discovered by Church Militant during the Summer of Shame that St. Gallen was one of the dozens of locations around Europe set up by the Soviets after World War II as secret training centers for communist agents. McCarrick's entire career was so convoluted and so entwined with scandal and corruption that it is impossible that no one else in the clergy knew about it.

He was attacking seminarians, having insurance settlements paid on his behalf by the Church, backing the careers and advancements of multiple morally corrupt clergy into high-ranking posts — men like Joseph Tobin, Blase Cupich, Robert McElroy, Kevin Farrell — each one of them cardinals who will be part of electing the next pope.

It was McCarrick who negotiated the infamous China-Vatican accord that got Cdl. Zen imprisoned for speaking up to defend Chinese Catholics. And while a little-known loophole in Massachusetts law has allowed McCarrick to be brought up on criminal charges from a decades-old case, not a single thing has happened to his network in the Church.

The same men he advanced have still not been dealt with. Not a single bishop has stepped forward and admitted to a single thing. Every one of them claimed they knew nothing; heard nothing; were aware of nothing.

The cases against McCarrick in Canon Law courts continue to drag on while victims are offered paltry sums in secret to shut up and go away. These malefactors regard truth as an enemy. They have no regard for the victims, justice, the Church or God.

Vindication will come. It always does.

McCarrick is only personally in the spotlight these days because of that loophole in the criminal code that allowed him to be brought up on charges. But there is no spotlight for his many accomplices, men who hitched their career wagons to him and now lie and cover-up for him. Not a single person in the hierarchy is demanding justice or accountability for the men who helped propel McCarrick forward and kept his filth under wraps and still keep it under wraps to this day.

It is the homosexual network in the Church being used by Satan to wring the necks of the faithful. And here, years after McCarrick has been off stage, his evil still continues, owing to evil men who still benefit from it. In temporal matters in the Church, they are in control. And if you don't realize that, you don't have a pulse.

But it is Christ Who is in ultimate control. He is permitting them this moment for whatever reason —  a reason that, for the moment, remains shrouded in mystery.

In the meantime, it is the responsibility of faithful Catholics to fight this wickedness by exposing it and by never relenting in pursuing truth and justice — for the victims, the Church and Christ Himself.

Vindication will come. It always does. 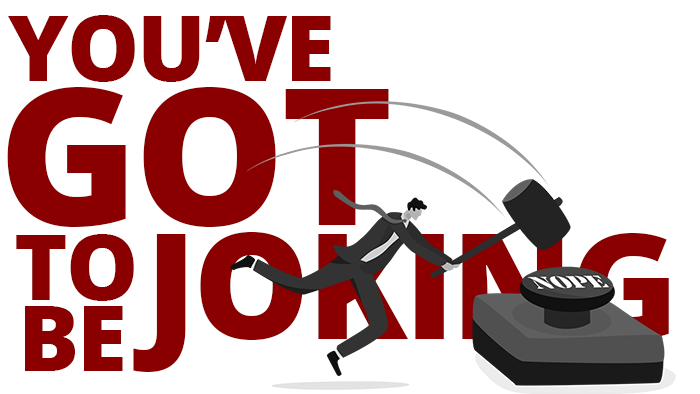 You've Got to Be Joking
Unfortunately, it's not a joke.