It's okay for the media to kill.

The media claims that the attack on the Capitol last week was an insurrection are patently stupid. No one was trying to overthrow the government and the media, of course, knows that. There was no coup, or even attempted coup. But spinning language like that is the stock and trade of Marxists, just read a little Saul Alinsky.

But if you notice the strategy of, first, the media elites finding the right vocabulary and then, once that's settled, pumping it out like sewage, you'll see how these phony dramas like the impeachment unfold. The word "insurrection" became the media go-to word and quickly circulated among the Marxist Democrats, proving once again that whatever the communist bastard Democrats accuse someone else of doing is exactly what they are actually doing.

Think Hillary, think Ukraine, think Russian collusion, and, now, add to it "insurrection." Man, they are good at what they do, at twisting the narrative. And it always results in a media lynching, which was the point to begin with. Take, for example, the case of Mark McCloskey and his wife Patricia of St. Louis, who unwillingly were blasted by the white-hot media spotlight for defending their home as BLM and Antifa rioters crashed through the gates of their neighborhood last summer.

Their standing on their front stoop, ready to defend their home from those violent rioters was a scene the media had to attack because, to any normal person, it makes perfect sense to defend yourself as a mob is drawing close to your house yelling things like, "We're going to burn it down and rape your wife and kill your dog."

The country is run by a small handful of people who hold the microphone, and no one is allowed to challenge them.

Of course, the Marxist district attorney charged the McCloskeys with a crime. The mob? Meh, they were marching and rioting for a really good reason so that's okay. Earlier this week, we spoke with McCloskey and asked for his view of what's happening right now in America.

The country is run by a small handful of people who hold the microphone, and no one is allowed to challenge them. The Democrat and Republican parties are now subservient to the media. It's media-owned government.

In an extremely glaring example of, call it what you will, hypocrisy or the double-standard, McCloskey draws on his and his wife's own bad experience to highlight the perversity. And drawing the even larger point about the hypocrisy, McCloskey drew a comparison between the Washington, D.C. violence and the violence of the mob at his house this last summer.

As the dark winter of socialism begins to descend on America, even before Biden has illegitimately taken the oath of office, the Marxist language machine is already cranking up. Anyone who supports or supported Trump is "irredeemable," "treasonous" and "unpatriotic." The table is, indeed, being set.

It's one thing to have been labeled "deplorable" or accused of "clinging to your guns and Bibles," because those are just insults and slurs. But to be called treasonous is a whole new level because treason is a crime. One of those labels will eventually be settled on — the media is just exploring for the moment, running focus groups on which one sticks, like "insurrection" and "coup."

The Marxist language machine is already cranking up.

It's all part of the lynching process. To be damned by the media, you must first be accused by them of something. So they cast about, looking to see which accusation best resonates with low-information people and other Marxists. Once they land on it, they're off to the races.

One example of this was how refusing to wear a mask or even challenging it became "unpatriotic," according to Joe Biden, the man who wants to implement a nationwide mask mandate seconds after he's sworn in. If you don't comply, you are unpatriotic. McCloskey sees all this being set up months ago, as the Marxists got unbelievable traction out of the Wuhan virus. And now, how they will continue to milk it for everything they can!

Censorship, being bullied, forced to comply, silencing free speech, labeling dissenters from the established narrative as traitors, it's all part of the media lynching process — soon to shift into even higher gear (in a little over a week). After all, they got their man in the White House, without even winning the election. 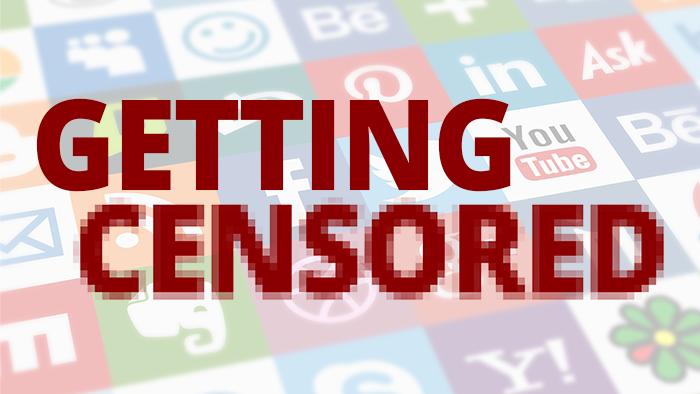 Getting Censored
Church Militant is the solution.