So, last Thursday, an article appeared in The Washington Post penned by the notorious Fr. James Martin. It was entitled "I called for Christians to love gay people. Now, the Catholic alt-right is taking revenge." In it, he holds forth that he is this nice sweet priest who only wants to encourage Catholics to love gays. And he is shocked at the hate shown to him by such bigoted Catholics like Church Militant — the only one of these "bigoted groups" he mentions by name.

Since we were mentioned by name in his article, we contacted The Washington Post and asked for equal time to refute his claims. Here is the "article" we wrote titled "Deceptive, Misleading and False."

The very title of Fr. Martin's pity piece is misleading. It is cleverly worded and topically arranged and completely misleading — very deceptive and in the end simply not true. First, he did not just call on Christians to love same-sex attracted people but to accept their sin as normal. The distinction, here, comes in the meaning of words.

There's no doubt that Fr. Martin believes all he is doing is saying Catholics should love people who are engaging in genital activity with members of the same sex but the problem is his deluded understanding of love. Love does not condone it and bless it and try to normalize it. But this single point is where Martin's entire argument stands and falls, as well as those U.S. bishops and cardinals who either openly back him or stand on the sidelines afraid to jump into the fray.

Martin does not believe that same-sex activity is sinful. He never mentions it. He never teaches what the Church teaches with regard to the call to chastity. And he has even said that same-sex attracted people are not bound by the Church's teaching because they have not "received it." Since they have not "received" it then the teaching is not authoritative and therefore can be disregarded after "careful thought and respect of course." His extremely clear implication is that there are certain times when same-sex partners can proceed into disordered actions and it not be sinful or even evil for that fact. Two thousand years of clear Church teaching, stretching back to St. Paul, violently disagrees.

What Martin has done, and something his allies in the godless secular media are happy to assist him with, is to re-define acceptable norms for sexual activity to include essentially anyone who wants to do anything; and if they have emotional feelings for each other then even more so. This is the new standard, a standard not even acceptable to pagans of the Roman Empire, and it is the embracing of this standard that Martin wants the Church to do.

He is a bully par excellence, for he forces his opinion, not by argument, and certainly not by Catholic theology but by invective and labels of hate, bigotry and with regard to Church Militant specifically, lies and smears like "alt-right Catholics." No, Father, that's orthodox Catholics, something we would counsel you to look into.

In conjunction with his modernist ilk in the Vatican and various dioceses in the U.S., Martin even suggests that Church Militant is an enemy of the pope — a charge successfully touted against Cdl. Raymond Burke by such pro-gay cardinals like Donald Wuerl of Washington D.C. No one is as expert in labeling and defining their opposition as the Left because they stoop to levels that decent people will not in argumentation. Any disagreement with them is immediately translated into ad hominem attacks resulting in smears and so forth and, of course, the inevitable charges in Catholic discourse of the dreaded a lack of charity.

So let's be clear. First, Church Militant doesn't hate anyone except the diabolical. We do hate the effects of treachery, heresy, apostasy and schism, which are brought about by traitors, heretics, apostates and schismatics. And why do we hate these effects? Because they greatly endanger souls. That's precisely why the Church guards against them with such gusto in Her teachings.

Fr. Martin is spreading heresy. That's is not an outlandish hate-filled statement motivated by homophobia and hatred of the pope. It's just a simple fact Fr. Martin has concluded that Church teaching in this case, on chastity, doesn't really apply if a person or collective doesn't receive it. That's heresy. Take that principle — that unless the majority of Catholics accept a teaching then they are excused from it — and apply it across the board.

Truly, it would appear that Martin is only saying what a majority of Catholics and apparently bishops already believe — that if you don't think it applies to you, then it doesn't; and you can be self-exempting, which they are. Very little else explains the actions of homosexual clergy, raping thousands of altar boys and scores of bishops covering it up and exposing even more teenage boys to the danger.

Very little else explains the recent defense of Fr. Martin's laughing off of chastity teachings by San Diego Bp. Robert McElroy who said, "The disciple is obligated to confine genital sexual activity to marriage. But chastity is not the central virtue in the Christian moral life. Our central call is to love the Lord our God with all our heart and to love our neighbor as ourselves." That, ladies and gentleman, is called a whitewash. Tipping the hat to the teaching and then wording yourself from that point forward to essentially undermine the teaching. No one has ever claimed chastity is the central virtue but it is absolutely a necessary virtue. Like other virtues, without it you are damned — a little detail the bishop just skips over, conveniently.

What we're talking about here, or rather James Martin just keeps pushing, is not love but sodomy between two men who have romantic feelings for each other. Even if they share a deep bond of affection for each other and do truly care on some levels for the other that does not allow for sodomy or genital expression. But Martin conflates all of it — their emotional attachment and sodomy — and says if you don't accept both, then you are a hater. Under what exact conditions is a faithful Catholic not to speak out against that heresy?

Which makes the recent comments by Philadelphia Abp. Charles Chaput even more curious. He too, like Martin, can't resist the urge to cast Church Militant in a negative light, prompted no doubt by a personal exchange between him and me over our coverage of the moral and theological corruption embedded in the Church social justice nonsense. The archbishop, who is likened to a champion of the right, takes umbrage with Catholics, like us and others, who demand that he and his brother bishops do something about this priest spreading his poison. But no, just as large a problem as Fr. Martin, if not perhaps even larger, is the reaction from faithful Catholics.

Faithful Catholics would be about their everyday business and lives and Church Militant would not even exist if the shepherds of the Church for the past 50 years had not, in essence, abandoned their duties, present company included. Father Martin has publicly addressed a Catholic homosexual couple in terms of them being married. Father Martin has said that Church teaching on chastity does not apply to Catholic homosexual couples. He has said that they should be allowed to kiss at Mass.

And yet, Abp. Chaput feels the need in the face of all this to scold faithful Catholics to calm down and actually even offers kind words about Fr. Martin — not defending his heresy but not really going after it either. While bishops like McElroy are promoters of such heresy, others like Chaput are enablers. If Chaput really believes, which we hope and trust he does, that what Martin is saying is anti-Catholic, which it is then why not pen an article calling his brother bishops to task for their silence, instead of us and others for our speech? Martin's heresy is the result of decades or longer of leaders in the Church, refusing to confront and other leaders in the Church willing to accept evil for their own personal reasons.

Pope Benedict said we would have to ride out the storm of these malformed bishops, so please forgive the little helpless laity who are sick and tired of malformed, cowardly or politically correct bishops who will stand for anything instead of Christ. While they can't keep their mouths shut about DACA, immigration, climate change, Trump, single-payer health care and a host of other Saul Alinsky talking points, those same mouths suddenly become glued shut when moral issues like contraception and sodomy hit center stage.

The sad truth, for which there will have to be a final eternal accounting, is that Fr. Martin and his heresy is nothing more than the ugly offspring of the U.S. bishops, and now, at a time when they are needed more than ever to be fathers, they are abandoning their children again, scolding them and ordering them to accept the sickness of their brother and understand him while he is abusing them.

That was the article for The Washington Post. They, of course, did not print it. 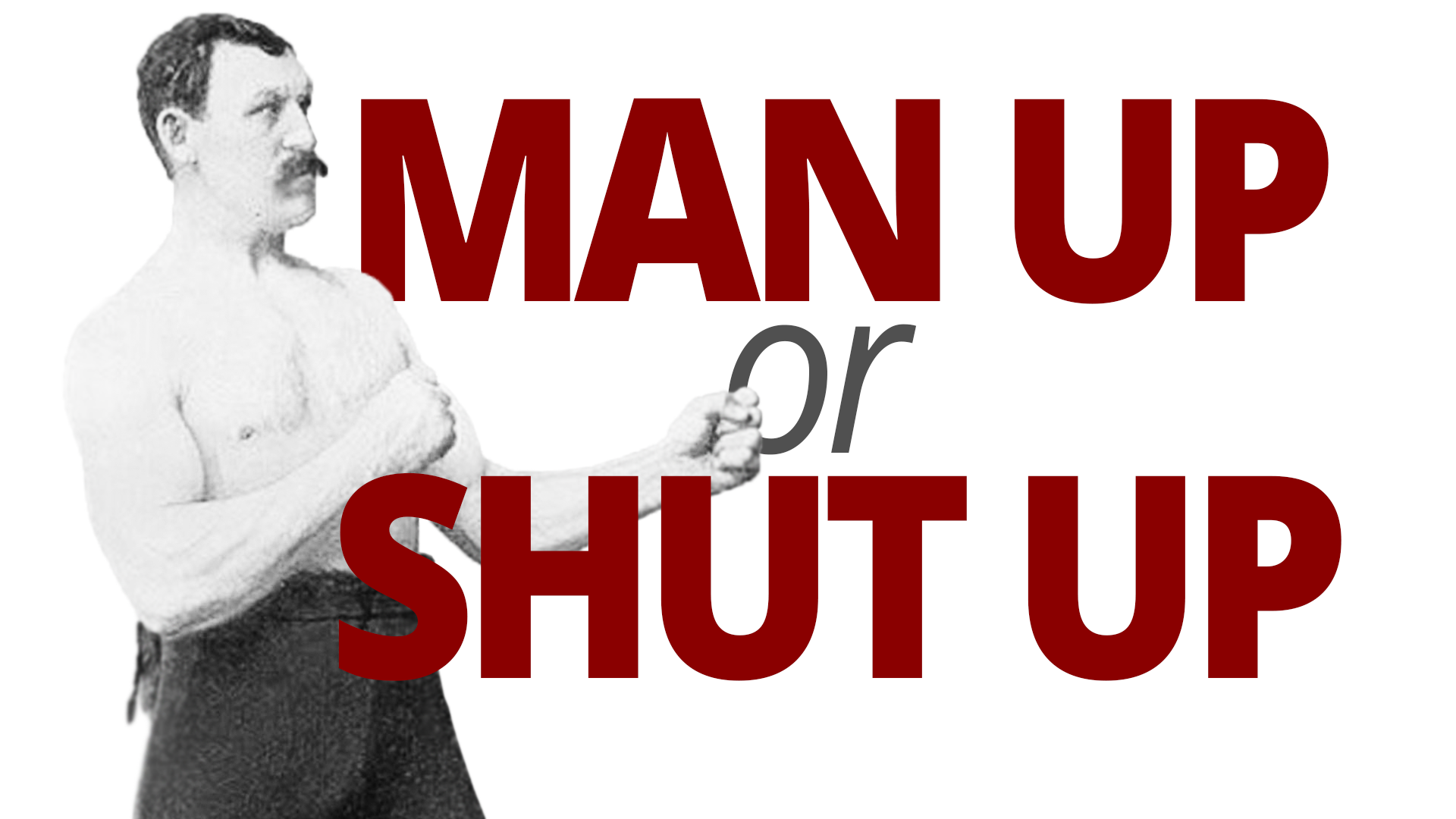 Man Up or Shut Up
The irony and hypocrisy are stunning.