Her heart must be breaking.

So, last week, Vice-President Mike Pence spoke at the National Catholic Prayer Breakfast. Talk about an awkward moment. The former Catholic had to thread the theological needle of both praising Catholics, while not saying too much laudatory about Catholicism since he walked away from the One True Faith in his early adulthood after meeting his eventual wife, who according to reports was also a faltering Catholic.

From various accounts, it's somewhat easy to decipher that Pence's Catholic mom, whose little boy grew up to be vice-president of the United States, is none too happy about his apostasy from the Church. He even took a moment to give the situation a tip of the hat in his opening remarks. Pence's mother, Nancy Jane, could not possibly be happy about the choice of her son to abandon Catholicism after he met his future wife.

Like so many Catholic mothers whose heart is aching and breaking over worry about the eternal destiny of her son, given his abandonment of the Church personally established by the Son of God, outside of which there is no salvation, Nancy Jane must be worried sick. She probably doesn't have a lot of time left on this earth. And you can bet she is offering up rosaries and sacrifices and everything else imaginable for her little boy to come back to the Truth.

And see, here is the problem with the state of affairs in the Church today — a perfect, famous living example. He's a nice guy. He checks every socially conservative box there is — pro-life, pro-family, strong national defense, border security, lower taxes, you name it — every one of those boxes is checked. But there is the matter of his soul. Now, no one can pass judgment on his soul of course, but somewhere, someone has to stand up and say — this is not acceptable.

The truth of the Holy Roman Catholic Church — access to the graces of the sacraments — being able to receive the Body and Blood of Jesus Christ, cannot simply be lightly shoved aside because the political aims coincide with those of some politically conservative, faithful Catholics. Admittedly, convergence on these points is a good place to start working from — sure. But no one gets to Heaven because they have a good political voting record. You get to Heaven because you die in a state of grace.

If you die in opposition to the One True Faith, someone who knows and rejects the Church, you cannot be saved. It's right there in the Catechism, No. 847: "Hence they could not be saved who, knowing that the Catholic Church was founded as necessary by God through Christ, would refuse either to enter it or to remain in it." That quote in the 1994 Catechism is lifted almost verbatim from the Second Vatican Council, Lumen Gentium, no. 14.

Back to Pence's comments. "The hymns and liturgies of the Catholic Church are the anthems of my youth. The Bible says, 'Train up a child in the way he shall go and he will never depart from it.'" Well, apparently that's not always true. Pence has departed from it. By his own admission, he still shares a nostalgia for the Church, he has fond memories of the Church of his childhood, but when it comes to actually having embraced the fullness of it, he doesn't.

"As a young boy growing up in southern Indiana, my Catholic faith poured an eternal foundation in my life. … But that foundation continues to serve and inform me everyday." Again, not so much. Not in the things of eternity, anyway.

There is an atmosphere among politically conservative Catholics that as long as we are united with Protestants and apostate Catholics on the matters of pro-life and pro-marriage, well, that's okay. Well, no, it's not, and it has to be said very clearly. No one goes to Heaven because they prayed in front of abortion chambers. What matters in the determination of someone's eternal life is their willingness and openness to God in all areas of their life and living it out, fully and completely. Catholicism is not just one good pro-life religion among many, so we can sort of lay aside the question of religious affiliation. Belonging to the Catholic Church means everything, not just something.

"While my own faith journey has taken me and my family in a different direction, I want you all to know how much I cherish my Catholic upbringing and cherish the Church. In fact, I just attended Mass with my mom this weekend when we were in Chicago visiting family." It's purely subjective on our part, but what we hear there is a call for acceptance from Catholics, even though he has left the Church, a kind of politically conservative absolution for his apostasy. It's great that he's pro-life and no doubt, his youthful Catholicism probably heavily contributed to that. Awesome. Yea for the Church. Yea for him. But Mike Pence has walked away from the willing reception of the Body and Blood of Our Blessed Lord after meeting his eventual wife.

His fondness and nostalgia for the Church, and his very good politics are not what are required of him. Love of Christ in His Church is what is required of him. He knows the Truth. He went to seminary. He ran the youth group in his parish. His family was devout. See, there is a danger in this political conservatism that Catholics are embracing if its concentration is dedicated largely to just bringing about good social policy on earth.

It's understandable, given how far the Left has moved the ball in the past fifty years, that everyone's attention would be focused on abortion, same sex marriage and so forth. But those evils are a direct result of a civilization abandoning Catholic truth. They are not the problem. They are symptoms, horrible as they are, but they are not the problem. Truth has been abandoned in this civilization and when truth has been abandoned, it's lights out. That also goes for, most importantly, religious and theological truth.

The Catholic Church is not a museum piece, a nice thing to have in your photo album from childhood, or something to have cute little well-meaning jokes about with other conservatives that smilingly excuse responsibility to the complete truth. It is the sole means of salvation for mankind. To reduce it, even by the smallest amount, plays right into the hands of the diabolical.

The scene at the prayer breakfast last week was an uncomfortable embrace of comfortable Catholicism —  that place where mostly faithful, politically conservative Catholics are willing to make the Faith secondary to good and noble political causes. That's backwards, and it's got to be said very clearly, saving souls is more important than saving babies. That's not to denigrate pro-life efforts.

I used to give talks to my fellow high school classes about the evils of abortion back in the early years after Roe v. Wade in 1975 and 1976. I am and have always been staunchly pro-life. But abortion, as evil and murderous as it is, will one day, even if it's the Last Day, will come to an end. The loss of a soul is forever. We know lots of people don't want to talk about this but it has to be talked about.

The watering down of the March for Life since Nellie Gray died three years ago is one example. It's morphing into an ecumencial event where it used to be decidedly and visually Catholic. The whole pro-life movement, once solidly Catholic, is transforming into one where we don't talk about some evils because it will upset our Protestant brothers and sisters. Contraception comes to mind. It was Protestantism that gave us contraception in the first place -  1930 Lambeth Conference, Church of England.

The point of the Catholic Church is not to make common cause with anyone who joins us on pressing, important social moral issues. It's to evangelize and convert people to the one true Church established by Heaven, personally by the Son of God.

Mike Pence's mom understands this single point very clearly, as do hundreds of thousands of other Catholic moms, probably millions, who watched their sons do well by the world, but give up the Faith. 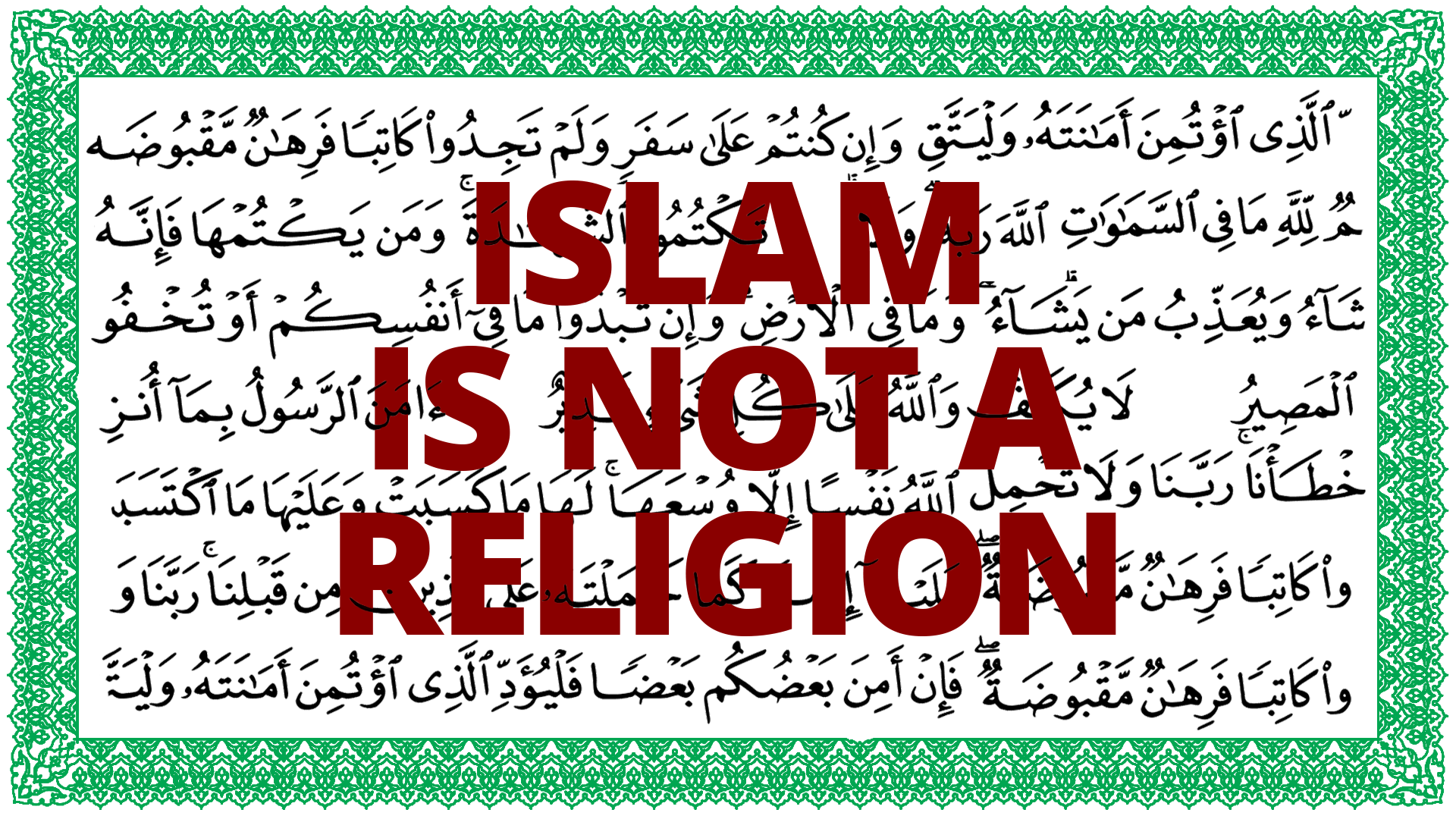 Islam Is Not a Religion
But it is helpful to the Institutional Left in its war against the Catholic Church.