One of our chief goals here at Church Militant is help viewers understand not just specific things going wrong in the Church, but how none of these things are occurring in a vacuum.

They're all related, and we make it part of our mission to help you understand the context and the bigger picture so when you see a specific story, you don't see it in isolation, but understand how it feeds into the larger crisis.

Why are we committed to this "contextual" journalistic approach? Because the Church is burning to the ground, and loyal sons need to step up and fight for Our Mother because, at the end of the day, all that matters is souls — saving souls, sacrificing yourself to save souls. Everything else is passing.

Right now, the Church is severely compromised, deeply compromised, in Her divinely appointed commission to fight against the gates of Hell and rescue souls. It's run by a corrupt gay mafia.

So we are dedicated to exposing that rot within the Church and connecting the dots for you on how one seemingly singular story is never just singular.

Taking the case of the archdiocese of Detroit and its bungled handling of the Fr. Perrone case we reported on last week, there are a host of other related stories spewing forth from this one, and each of those angles also needs to be presented.

For example, let's look at the coverage the story has gotten in the Catholic media world.

Late last week, CNA — Catholic News Agency — did an interview with the Detroit priest behind the pressing of the charges against Fr. Perrone, Msgr. Michael Bugarin.

Bugarin had earlier granted a highly inappropriate interview to the Associated Press and produced and handed out a press release that went all over the world saying the charge against Perrone was "credible."

When we confronted him in the back of Fr. Perrone's parish handing out the statements, those statements had the word "credible" in them.

But, after getting severe blowback for doing that, he all of a sudden seems to have forgotten the word "credible" in his interview with CNA.

In fact, CNA made special mention in its article that he avoided the word "credible."

And now we see two different stories emerge here — each one worth its own fleshing out.

First, why did not CNA directly challenge Bugarin on not sticking to the word "credible"?

After all, just a few days earlier, he had announced it to the whole world and it was seen even in this Fox News ticker — his specific doing because he's the man in charge of these cases for Abp. Allen Vigneron.

This is why we say, in separate storylines, that the Catholic establishment media cannot be trusted.

They don't ever ask the hard question because they cannot afford to tick off the Establishment and bishops who they depend on. They let him completely off the hook — on purpose.

Bugarin issued a statement, destroying the reputation of Fr. Perrone around the globe and yet CNA didn't think of pressing him on that point.

That article, as a result, like so many articles in CNA are little else than public relations statements for bishops and their staffs who need to switch into damage control.

One by one, case by case, story by story, CNA and other Catholic establishment media are being revealed as nothing more than shills for the bishops.

Now, the second storyline is this: Why did Bugarin give this interview — and related, why did he back off the use of the word "credible"?

He and the phony independent review board of the archdiocese had accepted the charge as "credible" and felt fine signing off on the press release as did the archbishop — as did the attorneys.

The entire Detroit bureaucracy accepted the smearing of Fr. Perrone as perfectly acceptable. But they all did so without letting him claim his own innocence, which he did to the Associated Press

As we said last week, Church Militant has known the identity of the accuser for weeks. Because of that, we also know that the claim of abuse is 40 years old, that it came from a "repressed memory."

Does Msgr. Bugarin and the archbishop not think that information is relevant enough to include in a press release for around the world.

They don't have to release the accuser's name. We know it and haven't. But that doesn't mean you still can't talk about the circumstances. And why didn't CNA ask about all these circumstances in their softball interview?

Whenever bishops or the establishment get "caught," they run to CNA types to do an "interview," which is little else than reliable cover for them.

What did Bugarin offer in that interview that was new or more clarifying? Nothing.

He just got "caught" in the back of Perrone's parish last Sunday because he didn't have a choice since he was there to hand out fliers condemning Fr. Perrone without the investigation being completed.

He has not served the archbishop well. He needs to go — be fired or resigned.

No one in charge at CNA thought one little bit about any of this, and that fact is its own story. What's the point of touting yourself as a news outfit, when you don't know how to do news?

This is just one more example of why we say Church Militant can be trusted and the Catholic establishment media can't.

Why hasn't any, not one single Catholic establishment media outfit, reported Church Militant's exclusive interview with McCarrick victim James Grein that he was sexually assaulted by Cdl. Joseph Bernardin.

Because for those fake news outfits to pick up on a Church Militant exclusive would give us credibility from them, and that is the absolute last thing they can afford to do.

CNA and other Catholic establishment media are specifically "fake news" because they make the deliberate decision to leave out relevant information.

For example, in this case, the head guy at CNA is JD Flynn, who is a canon lawyer with zero experience as a journalist who was picked by the bishops' establishment to run the show there.

They have a reliable man in place to get their word out whenever they need him to.

And in the matter of this story, JD Flynn knows good and well the implication of Bugarin using misleading language about Fr. Perrone, which is why he never directed or edited out anything about Bugarin's use of the term.

There's never just one cockroach when a system is corrupt; it takes joint effort from many different quarters.

And in the case of Fr. Perrone, there is a confederation between a compromised review board, Abp. Vigneron and his point man and now the Catholic (not) News Agency rushing to shore up their actions and provide cover for them.

These bishops and their staffs cannot be trusted; and neither can their fake news outfits. 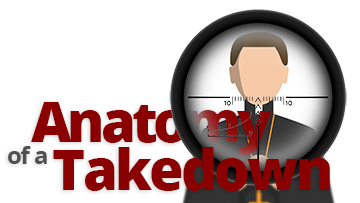 Anatomy of a Takedown
And every bit of it is underhanded.