Nothing else even comes close.

Because we are in a fallen world and because we have fallen natures, there are many things that inspire fear in us, and on a purely natural plane, that's sometimes good. We should be afraid of many things. But the natural plane isn't where our major fears should be.

Even Our Lord told us not to fear the one who can destroy the body. Rather, He told us to fear the one who can destroy both body and soul in Gehenna, which is, of course, Hell. But people just don't trip over a rock and fall into Hell. True, the damned do choose their eternal fate, but that never happens in a vacuum, just as salvation never happens in a vacuum. It always involves others. Even St. Paul is explicit in telling us to get away from bad people because of their potential influence and ability to lead us astray.

In the fourth century, there was a period in Church history known as the Patristics — the age of the Fathers of the Church — where various great saints with gifted intellects arose and really laid it all out. They spoke in very clear terms, something the Church establishment in the United States would have a fit over today.

Various chancery types and many bishops would say these saints were divisive, ineffectual, intolerant, non-ecumenical, judgmental — you name it. Pull out any lexicon from the Church of Nice that you like: Today's hierarchy and their supporters in the Catholic media, seminaries, chanceries, etc., would condemn their talk.

But since these men have passed over to the Church Triumphant, the establishment types don't have to actually condemn them. They just have to ignore them. And brother, they are masters at ignoring them.

But there is one thing you must beware of, I assure you: bad bishops.

And once you start to familiarize yourselves with these great saints and read what they said, you understand why. Take, for example, St. Gregory of Nazianzen, the fourth-century archbishop of Constantinople. He was born just a few short years after the collapse of the Roman Empire and four years after the Council of Nicaea.

The Council of Nicaea smacked down Arius, a priest who denied the divinity of Christ. Arius said Jesus was really important, but He was not God, not the Eternal Logos Who had assumed human flesh and nature unto Himself. So, yes, it is a pretty big deal there — if you accept Jesus is not God, then you attack the Blessed Trinity.

The Council of Nicaea laid out the creed we say at Mass each week, not just reaffirming the divinity of Our Lord, but really laying it out: God from God, Light from Light, True God from True God, begotten not made, consubstantial with the Father.

Saint Gregory was born in the immediate aftermath of this time. At the time, a huge number of bishops rejected the divinity of Christ and sided with the Arian view of "superman" Jesus, not Jesus as God.

While the Council of Nicaea settled the matter theologically, it did not solve the matter in practical terms. Loads of bishops continued in their stubborn rejection of the teaching. Recognizing the massive threat such men posed to the sheep, St. Gregory penned the following: "Now of the lion one need have no fear; the leopard is a gentle creature and even the snake you are terrified by is likely to turn in flight; but there is one thing you must beware of, I assure you: bad bishops."

Ah! Bad bishops — a dire warning from the mouth of a saint who was an archbishop himself. Beginning to see why the folks from today's Church of Nice never bring these guys up? Bad bishops are the key that opens the gates of Hell. Never forget that point. Follow them, and you end up in Hell.

Earlier this year, a disturbing number of bishops signed a pro-homosexual document from a group purporting to care about teenagers with attractions to the same sex. While the document never explicitly says homosexual sex is perfectly acceptable, no other conclusion can be drawn because the source of the document — the Tyler Clementi Foundation — is all about promoting sodomy under the guise of protecting homosexual kids from bullying.

To be clear, no one should be bullied except, perhaps, bad bishops. No one is promoting or defending the hazing, bullying, intimidating or any other non-Christian, sinful acts against another person. But there is much more here at work than just that, and the multiple bishops who signed this document know that. They are a lot sneakier than Arius was. They are coy, sly men who wish to subvert Church teaching on this point.

At least when Arius initially proposed his heretical notion, it technically wasn't heresy yet. That was the point of the Council of Nicaea.

But the intrinsically evil actions of homosexuality are already settled matters in the Church. So the bishops who signed that document walk right up to the line of heresy, never coming right out and saying it, but, nonetheless, supporting homosexuality with a wink and a nod. Leaders among them include Cdl. Joseph Tobin, who:

He knew all about McCarrick and even admitted that the diocese of Metuchen had made secret payments in lawsuits involving McCarrick in 2007 and 2009. This whole homosexual network in the hierarchy is revolting and powerful. If you don't understand that or don't want to admit it, then you are part of the problem.

Another name that appeared on that document recently was Bp. Alberto Rojas of San Bernardino, California. A little history on Rojas is needed here. He's from Mexico and made his way into the U.S. hierarchy via the archdiocese of Chicago back in the 1990s. At the time, the archdiocese was under the notorious homosexual cardinal Joseph Bernardin, who had set up a homosexual seminarian pipeline from central and south American countries into the archdiocese.

Known as Casa Jesus, its pretense was to be a school for English-as-a-second-language facility. It was, in fact, a homosexual hothouse where English was also taught as almost an afterthought. This is where Rojas came to from Mexico, like so many other Mexican nationals. The archdiocese paper reported it a few years ago. But his time spent passing through the gay seminarian pipeline is missing from his official biography. We'll just leave it there for your consideration. Not every single student who was enrolled there was homosexual, but the overwhelming majority were.

Blase Cupich, a pro-homosexual himself, actually had to close it down a couple of years back because of all the activity and news getting out about it. Two of his priests who had gone through Casa Jesus were caught having sexual relations in a car right across from a school in Miami while they were on vacation. Local television cameras caught the two men being transported to a court appearance after a police officer stumbled across their "activity" and arrested them.

That's a sampling of the alumni from Casa Jesus, but it's just a small sampling. This was the environment in the archdiocese of Chicago under Bernardin, who advanced sodomy at every turn under the thin veneer of wanting to "minister" to the homosexual crowd.

Rojas was a product of this environment, coming to Chicago from Mexico where he was eventually ordained and climbed the Chicago hierarchy. So, given that past, it shouldn't be surprising at all that he put his name on that pro-homosexual document that pretends to be all about bullying when it's really about homosexual sex.

On its face, the Tyler Clementi Foundation simply accepts that anyone who is homosexual is "born that way" and must be supported in being "that way." There is no word about trying to address the root cause of their inclination. But on Pentecost Sunday, a brave Norbertine priest from St. Michael's Abbey — Fr. Francis Gloudeman — got up in the pulpit at Mass and publicly condemned Rojas for signing the document.

Well, that was that. Rojas struck back by sending a flunkie to read a statement saying Fr. Gloudeman should not have done that because it's disobedient and insulting. Father has now been forbidden from exercising his priestly ministry.

If you are a cleric and you cross these activist bishops, you are gone.

He's just like Tobin and the rest of the bishops in the Church who want this teaching gone and who ignore it in its fullness, undermine it at every turn and promote the opposite whenever they get the chance. If you are a cleric and you cross these activist bishops, you are gone.

This is just further proof in today's Church that if you promote Church teaching, you are canned. If you oppose it, you are promoted. Returning to the words of St. Gregory: "There is one thing you must beware of, I assure you: bad bishops." The faithful must rebel against Rojas for his duplicitous position on the Church's teaching. Demand he remove his name from that document and restore Fr. Francis Gloudeman. 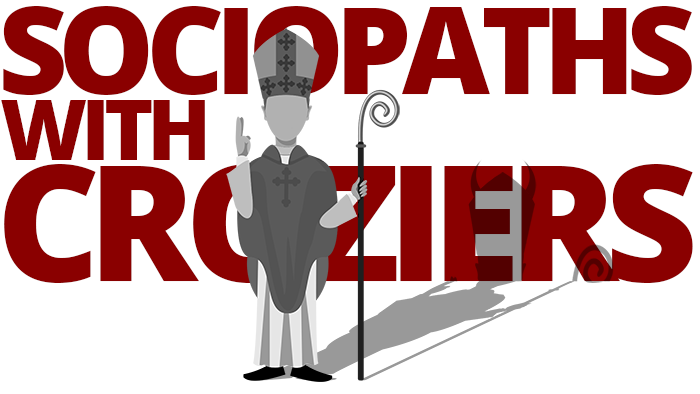