As we wrap up 2018 and move into 2019, it is always gratifying for faithful Catholics to remember that the new calendar year always begins with the great feast of Mary, the Mother of God — a holy day of obligation, by the way.

If there is a feast that stands in contrast to all that the world holds forth, it would be this feast.

First in title we have the name, Mary. She is the immaculately conceived virgin, chosen before all time for Her role in salvation history.

A role of singular grace and privilege; so exalted is She that the saints say She is the singular boast of our humanity. And following, God collected all the graces of the universe together and called them Mary. Mary had free will to decline the invitation from God brought by the angel Gabriel and that, therefore, makes Her "yes," Her "fiat" — the beginning of the redemption.

Next in title, She is mother. The supreme role of womanhood is motherhood. Yet this is something the world wishes to deny and does, in practice, every day. Mary was created for this role alone, to be mother.

It was through Her motherhood that the Word — the Eternal Logos — became incarnate. And when He leapt from His heavenly throne, His destination was His new throne of Her immaculate womb.

So extraordinary was this one-off moment in the annals of history that even the Holy Spirit could not contain His infinite joy, spilling over into Elizabeth and speaking through and with Her, calling Mary, "Mother of My Lord."

And finally in title, we encounter "God" — the Divine. While contemporary man is busy chasing after all manner of things "spiritual," men live in intellectual or practical rejection of the Divine. They are bored by the Divine but enraptured by things spiritual.

The reason for this is that "spirituality" is something they see as relating strictly to them, controlled by them, manipulated for them for their earthly advantage. The things of divine, of a supernatural order, hold no interest for man because they do not perceive them as being beneficial.

Ultimately, on this earth, authentic spirituality is about the cross as Mary Herself would discover, even prophesied by Simeon in the temple when Our Lord was still but 40 days old. The relationship between this mother and son may be nowhere more clearly laid out than in John's gospel account of the wedding at Cana.

It was here that Mary's maternity changed from being the mother of Jesus to being the Mother of Sorrows. Recall when She petitions on behalf of the couple that they have no wine — an overwhelming insult to the guests and source of enormous embarrassment — Our Lord responds to Her with three short expressions, strung together.

First, He calls Her "Woman," not "Mother," thus now expanding Her role from just His mother to the Woman promised in Genesis — and foretold in the Apocalypse — also to be written by John some years later, but already, of course, known to Our Lord.

Then, the oftentimes poorly translated Jewish idiomatic phrase: "what to Thee to Me" — meaning, "We are so closely bound together that whatever happens to Me, also happens to You."

So united were this mother and son, that with just a look, He could convey to Her His innermost thoughts. That was the preparatory phrase for what was coming last: "My hour has not yet come."

In summation, He was saying to Her:

Mother, if I perform this miracle at your bidding, I will begin to reveal my divinity, and when that happens, I begin my journey to Calvary. When I begin that journey, you will begin it too. You will no longer be the mother of Jesus, but the Mother of Sorrows. It will end for both of us on Calvary, and on that spot, you will become what you were created to be, the Mother of Salvation. But such maternity comes with a steep price, Mother. Remember in the temple when Simeon said to you all those years ago — that a sword would pierce through you. Now considering all that, that you are about to assume the role of the New Eve with all its pains and tortures, Mother, do you want Me to reveal the fullness of My identity by producing wine miraculously?

Knowing, of course, in advance that Her son was the savior of the world, as Gabriel had told Her, and Her role in salvation was to offer Him to God from the embrace of Her bosom, She stepped forward, gave Him one last singular motherly look into His eyes, recalling all the moments of affection and love when He was a little boy and turned Him over to their shared crucifixion for the redemption of the world — His physical; Hers, spiritual.

This is sacrificial love in its highest display, its penultimate order, the Mother of Grace, setting foot on the path of becoming the Mother of the Church as well. Jesus would no longer belong to just Her as He had for all these 30 years. He now belonged to not just history, but salvation history, and as She embarked on Her path along that sorrowful way, the Apostle John records for us Her last words in Scripture.

What a deep mixture of joy and sadness that must have evoked in His holy mother. She had known that this moment was coming, the moment of transformation. She had known it in a mysterious way all along. As the years passed, She became more prepared for its solemn arrival.

Aside from the agony of Her divine son, no human has ever felt the anguish of the immaculate mother giving Her Son over to such a death, as Mary at the foot of the cross.

And it was there, on Golgotha, that Our Lord, having no brothers and sisters in the natural order, delivered the care of Her over to St. John. But it was also there that He delivered us over to Her, for at that moment, She completed Her role as not only mother of Jesus and Mother of God but Mother of the Church — for all those in God have Her as their mother.

The Blessed Virgin Mary is indispensable to our salvation because the Son of God chose it to be that way, so ordered things this way — that She would be the Mother of God. 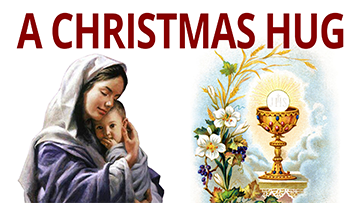 A Christmas Hug
From the Son of God.