But they tell a story.

I'm Michael Voris coming to you from Vatican City on the occasion of the sex summit, where part of the story has quickly become how terrified Cdl. Cupich looks facing the international press corps.

Every time the topic of homosexuality within the hierarchy comes up from journalists, Cupich's hands get very fidgety and nervous twitchy. In fact, it's so bad that the rest of the homosexualist cabal here in the Vatican might want to think about yanking him off stage.

He's just not a good front man for the cause. James Martin does a much smoother job of lying and distorting.

His voice gets shaky, his answers are very incoherent and, of course, there's those hands with some even venturing that it looks like the early onset of Parkinson's.

Now, given the reality of what he's saying, the fact that his distortions of the truth and his dodges and re-crafting of the gay issue would become evident in his body is not all that surprising.

For example, a few months ago, Cupich was prattling on about how homosexuality has nothing to do with the crisis, and as a sidebar, if this all sounds to you like a Catholic episode of The Twilight Zone, you aren't alone.

After a relentless beating in faithful Catholic media repeating the fact that 80 percent of the victims were teenage boys, Cupich ducked and weaved to gently acknowledge that undeniable fact — which he had been denying — but then quickly asserted that just because it was homosexuals raping the altar boys, it isn't a homosexual problem.

The "arguments" are so preposterous that it's hard to believe the assembled media aren't rolling in the aisles.

There isn't the slightest bit of scientifically verifiable evidence anywhere in the universe that suggest a huge number of men — not in prison — who are looking to rape teenage girls, would just go the easy route and decide to grab a boy instead.

That "any port in a storm" line falls apart after about three seconds of thought. Many, loads of these priests groomed these boys for years, concocted complex webs to lure them in, premeditated their evil, laid sophisticated plans to ingratiate themselves into the boys' families.

Apparently, none of the altar boy victims had any sisters. Additionally, many of these men went into seminary specifically because they were homosexual, as testified to by them in various media interviews.

To try and create the image that these are straight men who just had a momentary lapse driven by lust and found it easier to rape a teen boy than a teen girl is ludicrous on its face — no wonder his voice quivers — and well, those hands.

It's obvious that Cupich doesn't even believe what he's saying. And frankly, neither does anyone else — which raises the question, then why is he saying it?

Well, the answer to that is pretty simple. Cupich is being used to carry the water for the homomob in the Vatican, and like a useful dolt, he complies.

He's already something of a laughing stock among city officials and media back in his archdiocese of Chicago, and now, on a world stage, he is increasing that image.

All of this denial of the obvious and professional presentation of distortions is beyond pathetic and serves only to further underscore that there is indeed a very powerful current of homosexuality within the hierarchy, and it will go to any lengths to keep itself covered up and under wraps.

But with the release of the gay Frenchman's book going further perhaps than any other source — claiming that four out of every five clerics in the Vatican are gay — the nonsense pretense that the Church doesn't have a gay clergy problem is quickly crumbling.

Even if the book's estimate is severely overestimated, a lower percentage would still be devastating news for cardinals like Cupich trying to deflect the question and duck the issue.

As Church Militant and others have been reporting for years, the devastation the Church has endured for decades has been due in large, not solely, but largely to a homosexual problem in the ranks of the hierarchy.

And you don't have to believe us; you just look at the hands. 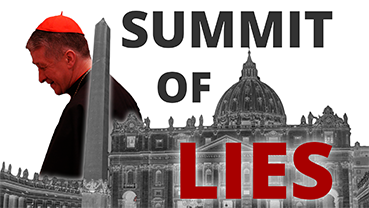