He meant, when something bad happens, find a way to score political points and advance your agenda even further and faster.

Well, aside from the weaponizing of the coronavirus by the Left, the same is now going on in the Church, and that's because a vast number of the hierarchy are actually sympathetic to the Left, and in some cases, card-carrying members.

First, there's the political idiocy. The Left is saying —we know this is shocking — that it's all Trump's fault. Either he didn't do enough in the beginning, or he's not doing enough now.

All of their plans have worked exceedingly well. Belief in the Real Presence is virtually nil among Catholics.

And now, since he or his supporters have dubbed it the "Wuhan Virus," on top of all of it, they are racists. Trump got attacked for putting a Chinese travel ban in place to contain the virus. According to the Left, that makes him xenophobic. Calling it the Wuhan Virus makes him a racist.

The media-driven hysteria, which they are pushing because they think it might be a backdoor way to get to Trump, is just ridiculously over the top. The markets plunging feeds right into the Dems' political strategy and, of course, it's all Trump's fault, as Joe Biden was stammering on about a couple of days ago.

What no one in the Marxist media is saying is that this is nowhere near as deadly as the H1N1 virus outbreak which killed about half a million Americans. The regular old flu kills anywhere from 40,000–100,000 Americans every year.

By the way, if there was ever a time to buy stocks it would be right now. Buy low, sell high.

However, the political Left can't really hold a candle to what is being accomplished by what we could call the theological Left. And we are talking about the Mass hysteria —  literal Mass, as in the sacrifice of the Mass. News that all Masses in Rome were canceled throughout the remainder of Lent, which essentially just began, sent shockwaves throughout the Catholic world.

The Italian bishops conference is either canceling Masses, limiting Holy Communion or a host of other actions that have the ultimate effect of dampening the Faith. They've actually posted notices at local parishes that say in effect, no Masses, no adoration, no confessions, no weddings, etc.

Talk about never letting a crisis go to waste.

But when you jump the pond and land on American shores, the U.S. bishops are also making hay out of the hysteria.

And for the record, we aren't saying ignore the virus, of course not. You should always take whatever usual and reasonable precautions you can to prevent you and your loved ones from getting sick. But too many U.S. bishops are being completely unreasonable and that's a charitable assessment.

One could easily conclude that many are using the situation to go after Communion on the tongue. They've long hated it because it smacks of traditional Catholicism but they've been a little hamstrung in forbidding it. They're hamstrung actually because they don't have jurisdiction to forbid it. Only the pope can stop the practice of reception of Holy Communion on the tongue.

Back in 2008 and 2009, the H1N1 flu, which was also called the swine flu, broke out and killed huge numbers of people. Of course, the U.S. bishops, ever watchful for an opportunity to kill Communion on the tongue, petitioned Rome to see if Pope Benedict would end the practice. The answer they got back was a resounding no.

Now pay attention because we have attached a link to Rome's response for you to print out and keep with you when you go to Mass. It says flat out that you always have the right to receive on the tongue, period — no exceptions. Always, always, always means always — always — even in the age of confusion which reigns supreme in Rome these days.

Again, click on the link, print out this document and keep it with you. It's your proof that you cannot be told to receive in your hand. It's only four sentences long. Ah, we miss the days of clarity.

And not only does it say you always have the right to receive on the tongue, it also says that it is illicit to deny Holy Communion to those who are able to receive.

And by the way, keep it with you even after the Wuhan virus scare is over, because you know that many bishops will never reinstate the practice with a public announcement that says "okay, all clear to start receiving on the tongue again." Fat chance — it's not going to happen.

There's much to get into here about the topic of the manner of reception. There's a long history to talk about — how homosexual Cdl. Joseph Bernardin of Chicago jammed through reception in the hand illicitly, over the objections of multiple bishops. We could talk about how reception from the cup was introduced to copy the Protestant revolutionaries who wanted to destroy belief in the Real Presence in the first Protestants, who were actually Catholics. The introduction of so-called eucharistic ministers was a further attempt to destroy belief in the Real Presence.

All of their plans, you have to say, have worked exceedingly well. Belief in the Real Presence is virtually nil among Catholics. Good job, bishops!

Hear that very clearly: No bishop can order you to not receive on the tongue.

Likewise, you can tell easily that many of the bishops are using this as a way to get at traditional Catholics, because frankly, traditional Catholics are just about the only ones who do receive on the tongue and kneeling at that. The vast majority of the few Church of Nice Catholics who still go to Mass wouldn't dream of receiving on the tongue, or kneeling. They show up late, grab their piece of bread and scoot out the door early, and then, not even every week.

So just who are the bishops talking to when they issue all these alarmist "the sky is falling" warnings? Certainly not the huge majority of the tiny percentage of Catholics who go to Mass.

And even if the Wuhan Virus was as great a lethal threat as the Marxist media is making it out to be — and the bishops are at least faking like they believe that, given how much they are canceling Holy Communion reception on the tongue — here's a question.

Are the bishops going to cancel their semiannual meeting that will take place here in Detroit in June? (See you there, guys.) After all, those most impacted by the virus, if they catch it, are older men in somewhat poor health. You couldn't find a more apt physical description of the U.S. hierarchy as a whole than that — old, out-of-shape, with other health problems — men. Then you're going to cram about 400 of them into the same room for days on end. Come on, bishops.

Then you're going to travel back to your dioceses and transmit the killer disease to your staff who will then kill off the laity in your diocese by shaking their hands. Bishops, come on, you aren't going to limit your efforts to just the laity at Communion time right?

Correction: The CDW letter was a reply to a lay Catholic in Britain concerned about the parish's restricting of reception of Communion on the tongue because of the swine flu scare, not the USCCB. 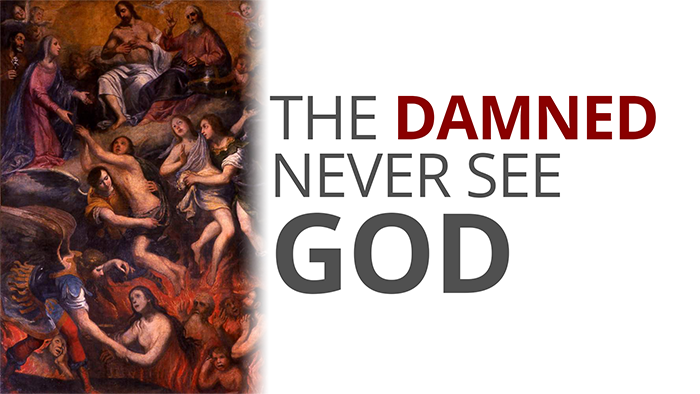 The Damned Never See God
Only the pure in heart will.