Silence opens the path for evil.

You've heard the old expression (we are fairly sure), "Never talk about religion or politics." In the annals of recorded human history, you'd be hard-pressed to find more ridiculous counsel than that.

First, only weak people ever offer that piece of advice. Passive, conflict-averse, Jell-o–for-spines individuals are the only ones who ever offer that kind of advice. Second, evil-minded people never stop talking about religion and politics. It is their constant hammering on it coupled with the lack of any kind of sufficient response from weak people that has allowed the ball to be moved so far down the field.

The "keep quiet" crowd could really take a page out of the Marxist playbook on this score — seriously. Marxists lie, cheat, steal and do all sorts of other assorted evils, but you need to give the Devil his due: He is relentless.

While weak people shy away from confrontation and offer up all kinds of excuses why politics and religion should never be discussed, the Marxist side has completely seized hold of the high ground here. They control everything because they have been allowed to. They know, either instinctively or through observation, that when they push really hard, religious and political conservatives will fold.

When someone tells you not to talk about religion or politics, first assess whether they are wimps or Marxists.

So why shouldn't they push aggressively? Look no further right now than the complete collapse of any meaningful response by Republican leadership on election fraud. Completely "MIA" — missing in action. There are a handful of individuals here or there that are calling for action, but they prove the rule of the majority of their allies.

So if they see no substantial resistance, why shouldn't Marxists push "full steam ahead"? They are.

For example, the largest, most politically active gay-rights group — the Human Rights Campaign — issued a public statement calling on a future Biden administration to cut off accreditation to any Christian schools that teach that active homosexuality is sinful. In order to receive accreditation, they urge that the school would have to include in its mission statement that gay is okay.

You'd be hard-pressed to find a more clear example of publicly talking about both religion and politics, which, again, the Marxist crowd has zero problems doing. They never shy away from it. In fact, just the opposite: They push the envelope every chance they get. Their goal is power, power to convert America (and from there, the whole world into a Communist form of one-world government, where a few elites rule over humanity).

At the recent Georgia Senate rally, Trump laid it out simply. He said, "Very simply, you will decide whether your children will grow up in a socialist country or free country. Socialism is just the beginning for these people. They want to go into a communistic form of government."

The Marxists have advanced to this point because they have played on the soft side of most Christians — a side that has only really emerged (on this scale at least) in the past century. They have muzzled people who say they follow Christ — muzzled them into thinking that to fight back is "not nice" or is "anti-Christian" or "impolite" or whatever.

Only the Marxists are allowed to talk about religion and politics. For people who actually believe in religion, they must fall silent, because they are either "racists" or "hicks" or "uneducated" and shouldn't be heard on these issues.

The Marxists have advanced to this point because they have played on the soft side of most Christians.

Only Marxists, who present themselves as caring about the poor (which they don't) are allowed to speak. And for some inexplicable reason, followers of Christ just go along with this. What do followers of Christ think He meant when He said "Light a candle in the darkness"?

In fact, how few self-described followers of Christ would even know how or what to say in response to all this? They've allowed themselves to be muzzled for so long that they've actually forgotten how to speak, like a dog with an anti-bark collar around his neck. After a while, it becomes normal to simply not bark, and they eventually lose the capacity altogether.

When someone tells you to not talk about religion or politics, first assess whether they are wimps or Marxists. If they are wimps, grown accustomed to not barking, then set them straight. If they are Marxists, then give it to them both barrels. But the one option you may never resort to is not to speak. Silence and weakness are gateways for evil. 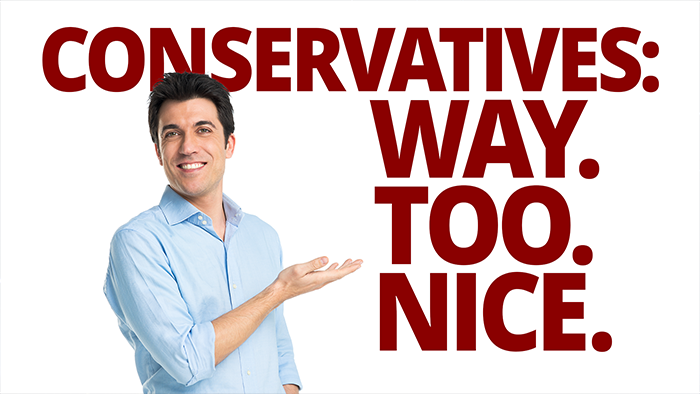 Conservatives: Way. Too. Nice.
Time to be more like serpents.