Too many US bishops are socialists at heart.

Around the time between 1965 and 1975, a sea change happened within the ranks of the U.S. bishops. In that time period, political divisions in America began becoming more pronounced over moral issues like no-fault divorce, contraception and eventually abortion.

The bishops had long been identified with the Democratic Party, owing to the immigrant nature of the Church in the preceding generations.

But as the political fault lines continued to grow, the bishops clung to their allegiance to the Democratic Party, still clinging to the old alliance even in the face of the greatest civil right struggle in human history: protection of the lives of preborn children.

Admittedly, this became an uncomfortable tightrope for the bishops to walk, but they managed to do it by just ignoring the abortion issue as much as possible.

Instead, they spent most of post-Roe v. Wade years talking about every Democratic Party social justice talking point you could imagine. Nuclear war, the environment, workers' rights, the need for President Ronald Reagan to demilitarize Europe by withdrawing U.S. troops — a call that even many European powers did not support.

As they were ignoring abortion and promoting anything else they could by the party of abortion, two things began to become apparent.

First, behind the scenes, much of the support for Democratic policies was coming from an increasing number of homosexual men who had infiltrated the seminaries as part of a Communist plan launched decades earlier.

The plan was to destroy Western civilization built by the Catholic Church and advanced to a large degree by America. Even though America's cultural roots have been tainted with anti-Catholicism, the moral code of the country prior to the 1960s was decidedly Catholic.

The second thing to become apparent was that a major fault political line was opening up between U.S. bishops and the faithful. For the roughly hundred years between the Civil War and 1964, Catholics were solidly Democratic, around 80–90 percent.

During the 1930s to the 1950s, Catholics were an essential part of Roosevelt's New Deal coalition.

There was almost no distinction between Church membership and labor unions, for example, making the Catholic vote a completely reliable component of the Democratic base.

But as the country began to turn more socially liberal in the mid-1960s, with Democrats blazing the trail, the Catholic vote began to desert the Democratic Party, with the vote now split nearly 50/50.

But the bishops and their policies did not follow suit. They stayed largely Democratic, overlooking the party's embrace of child slaughter in favor of the rest of the agenda of the Party of Death.

Today, we see that in support of illegal immigration, phony climate change, fake news coverage of President Trump, evidenced Cardinal Dolan's cold shoulder toward him at the 2016 Al Smith dinner while laughing it up with Crooked Hillary.

And, following all that background, here is the point: The Democrats are now the party of socialism. They have been that, in fact, for years, inching toward it, picking up steam with each passing election cycle.

And the U.S. bishops continue to support them despite the fact that socialism has been roundly condemned by a string of popes stretching back to the 19th century.

But the bishops are in a quagmire here. For decades, their loyalty to the Dems has been paid — or rather bought — with billions in government grants for the supposed War on Poverty.

The truth is for all the constant banging the drum about social justice the bishops and their staff at their D.C. HQ have engaged in since roughly 1970, it's all been a ruse to make sure that Democrats stayed in power.

The bishops have kept close ties, ideologically married to the party and just sidestepping that inconvenient abortion issue. That's why practically no bishop in the United States has ever come out and forbid reception of Holy Communion by any of these fake Catholic Democratic politicians.

It's why Dolan refused to excommunicate Catholic-in-name-only Andrew Cuomo of New York who signed the most liberal abortion law in world history earlier this year.

The bishops need the Dems to stay in power so they will keep getting their billion dollars or so each year, which they, in turn, hand out to extremely liberal social justice nonprofits who also help register new Democratic voters in key states, directly or indirectly.

See the case of the supposed non-profit ACORN about 10 years ago that had received millions in grants of taxpayer money through the U.S. bishops' conference and got busted by Congress specifically for its Democratic voter registration activities.

To keep the anti-Catholic, anti-conservative gravy train chugging along is precisely why homopredator Theodore McCarrick, in cooperation with current Atlanta Archbishop Wilton Gregory, lied to the body of bishops about a letter from the Vatican during the height of the 2004 campaign between Bush and Kerry.

McCarrick and Gregory told the rest of the bishops that Rome said that Catholic politicians like Kerry, who was fine with abortion, were perfectly free to receive the body and blood of Our Lord.

In fact, Rome has said the exact opposite — they were to be refused — but again, the Commie-trained McCarrick and the massively pro-gay Gregory just flat-out lied. The politically liberal, theologically dissident bishops hate Trump. They hate his vision of America as the world leader.

It's why they try to undermine almost anything he says or any policy of his. There are no cheers, for example, from USCCB HQ when he promotes the pro-life cause — near complete silence.

And as various levels of government agencies keep digging thru the evidence, they will find that many of the same bishops who covered up or participated in the sexual assault crisis are the very same ones who have opposed Trump and even Reagan back in the day.

The politically liberal bishops — and let's call them what they are: "socialist bishops," an oxymoron if there ever was one — are diametrically opposed to the general notion of a strong America.

They have thrown their lot in with the Party of Death, doing a financial as well as political calculus that they will profit far more keeping their allegiance with liberal Democrats than conservative Republicans.

But the fly in their ointment that they have no real control over as long as Trump is in the White House is the looming threat of a RICO investigation launched by U.S. Attorney General William Barr.

If that were to happen, the entire house of cards constructed by liberal and dissident bishops over all these years would come crashing down.

That house of cards has been anti-conservative, anti-Catholic, anti-American. They have taken up arms with socialists and communists for decades and actually been partially responsible for the leftward drift of the American political scene.

They hate Trump. But they are in dread of RICO. And so is the anti-Trump, anti-American Vatican.

The storm clouds are gathering, and many are beginning to wonder: Could a RICO investigation be the instrument that would clear out the filth from the Church?

Time will tell, probably sooner than later, as the evidence from around the country begins to mount. 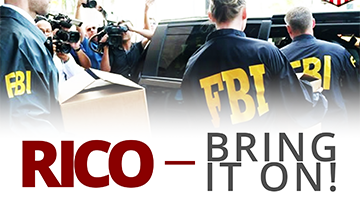 RICO — Bring It On!
It NEEDS to happen.