Not Wasting a Minute

And laying the groundwork for the future.

I'm Michael Voris coming to you from Rome, where the Amazon Synod is all set to begin, and the conspirators aren't wasting a minute.

This past Thursday, the opening press conference was called and the party line was promptly trotted out.

All is good. We are all listening to the Holy Spirit. And the Church is forging new pathways of evangelization.

Then a question was popped to Cdl. Lorenzo Baldiserri, in charge of synods, and Cdl. Cláudio Hummes from Brazil, in charge of this one.

The question was, before we proceed down the merry path here: What about all the criticism and shout-outs about heresy and apostasy present in the working document — what's known as the Instrumentum Laboris — the guideline for the entire synod?

And those shout-outs have been pretty loud, considering the esteemed members of the hierarchy they are coming from — the likes of Cdl. Raymond Burke, Robert Sarah, Walter Brandmüller, Gerhard Müller, Athanasius Schneider.

These men are no slouches. They are some of the most distinguished men in the Church, even if they are hugely disrespected in this pontificate.

We actually had the esteemed pleasure of running into Cdl. Sarah last week here in Rome.

But a last-minute addition to the Cardinal Caution Club came out of the woodwork a day ago. Cardinal Marc Ouellet was made cardinal by John Paul II and is now prefect for the Congregation for Bishops

Ouellet, not formerly classified as an enemy of the Pope — but probably will be now — said in a book just published enumerating some errors in the working document, "The Church either proposes the authentic Jesus who is identical with the Christ of faith, or it loses the reason for being of its mission."

Once the Pope finds out about this, watch for Ouellet to no longer be prefect of the Congregation for Bishops.

In the face of such intellectual firepower opposition, however, the Pope and his henchman push forward, completely unconcerned.

The response — if you can call it that — from Cdl. Baldisseri to the question about all this opposition was simply to laugh it off and dismiss it, saying not to worry, the document doesn't have any real significance because it's just a "working" document, it's "not magisterial, nor pontifical."

In other words: nothing to see here folks — relax, move along.

Baldiserri also took a sideways swipe at faithful Catholics on social media suggesting that what all of us report is fake news.

This marginalizing of opposition of the faithful is the under the radar message going out from the Vatican.

A plan to fight against outfits like Church Militant and LifeSiteNews to marginalize and ridicule them and their reporting and their concerns because our reports have clearly gotten to them and are waking people up to the rot.

In Spain a couple of days ago, Cdl. Walter Kasper, star of the corruption of doctrine at the 2014 and 2015 synods, gave an interview to a journalist, and when asked about the opposition to the synod, he says, "Those who are causing fears are small groups that are openly against the Pope. But you have to know and keep in mind that they are few, very few, although they make a lot of noise through the media. Do not attach any importance to them."

Kasper, you will remember, is the one who not only got his proposal pushed through about giving Holy Communion to divorced and civilly remarried Catholics, but also insulted an entire continent of Catholics saying Europeans in the Church did not really have to listen to all those black Catholics in Africa.

However, the racist and apparently white supremacist German cardinal had a lot more to say than just ignore the good guys.

He also was extremely frank in saying flat out that Pope Francis was stacking the deck for his successor, for the next Pope, and was doing so deliberately by picking ideological clones of himself to be cardinals.

Kasper told the reporter, "It gives the impression that with the nominations to the cardinalate that what the Pope wants is to ensure his succession. I think that in the next conclave, you cannot choose a pope who is 'a contrarian.' The people would not accept him."

And just like that, Kasper, speaking for the dissidents in the Church, are now in control and are the majority — lays out the reality.

The majority of cardinals who will elect the next pope have been handpicked by Francis specifically because they agree with him on doctrine and so forth.

In short, speaking in strictly human terms, when Francis is finally off the scene — and he is 82 years old — the odds are that Francis II walks out on the loggia after a very few ballots.

If that happens, the Amazon Synod will seem like child's play compared to what's down the road.

If you aren't praying for the Church every day, you better be.

Coming to you from Rome on the eve of the opening of the synod. 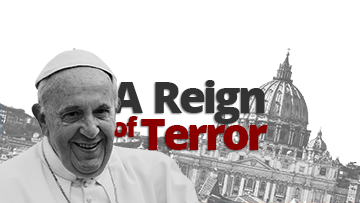 A Reign of Terror
The new normal INSIDE the Vatican.