Not Willing to Die

Because they don't truly love.

Before we begin, if I may ask you to say a prayer for my father and his eternal rest. Russ Voris would have been 93 today. God bless you, Dad.

And speaking of fathers, many spiritual fathers we have are an absolute disgrace and need to be called out left, right and center. The Irish have a term for such men — wastrels — one who expends resources foolishly and self-indulgently.

No one on the planet fits that definition more so than the U.S. bishops. Why? Because of the tremendous spiritual resources they have at their disposal, owing to their office. Yet time and time again, they squander those resources, refuse to tackle evil head-on and do nothing to protect the innocent.

But just as disturbing is the crowd of enablers who rush to the defense of these men because they, the bishops, are considered "orthodox." That word — orthodox — is treated as though it covers a multitude of sins. It does not. Not even close. Being privately orthodox is meaningless for a bishop if he does next to nothing to defend and advance the Faith.

It is of little consequence if he sits in his room and prays his Rosary and his daily Office, but goes out and withers in the face of evil. But it seems he can always count on the professional Catholics around him to make up excuses for him and say his life is tough and the decisions are tough and on and on.

First, there is no such thing as a tough decision when it comes to doing the right thing. What's "tough" is working up the courage to deal with the consequences. Admittedly, that may be tough. But the decision is not tough. Not even close. The decision is never tough.

Likewise, it might take a minute to collect all the data and information. But once that's done, the decision is always guided by the simple question, What's the right thing to do?

But today's weak, cowardly, revolting bishops — and for clarity, we mean the ones being defended by those around them for being orthodox — these bishops don't know how to even spell courage.

The vast majority of bishops have a much higher opinion of themselves.

They wear red as a sign of their willingness to die — to die for the Faith. These men are more concerned about disturbing the peace. They and their enablers will blast Church Militant for calling them out. They will call us divisive, say we are uncharitable, refuse to ever talk with us. Here in Detroit, our own archbishop — who has never sat down with us even once to talk — has privately called us demonic.

Likewise, the more genteel and professional bureaucrats among the "orthodox" bishop set view us as somehow beneath them and not worthy of being engaged with. But when it comes to the actual evil in the Church, they sit down with them, eat with them, cajole them, wine and dine them. And ruin souls.

And their enablers always defend their weakness. They make up the most ridiculous excuses about how little a bishop can do according to canon law. Complete excuse-baiting.

What there is, are a hundred excuses and B.S. reasons for not rocking the boat. These men are incapable of inspiring anything. They don't love the Church and the Faith enough. And that is precisely the point. Enough!

Sometimes, you have to die for what you believe. You have to give the full measure. They refuse. And their enablers are full of excuses for them. They are bureaucrats with crosses who say a reverent Mass, but when it comes to exercising the fruits of the Mass, they are missing in action.

It's a straight-line analysis to everything wrong with the Republican establishment. Weak, self-centered men who will say whatever needs to be said, but have a phalanx of enablers around them excusing their inaction.

There is almost no difference between an "orthodox" bishop and Senate Leader Mitch McConnell. Heck, according to a poll released last week, even most priests don't trust their bishops, and see them more as administrators than shepherds.

Yet, in a number that says it all, the vast majority of bishops have a much higher opinion of themselves. Go figure. Brain-dead, out-of-touch, tone-deaf egomaniacs. Completely self-centered, self-absorbed.

And for everyone out there who thinks, "Oh, that's harsh. You should speak more charitably." Stop. Stop already. Do you not understand that souls are being damned because of these men and their polite manners and niceties, their unwillingness to be bold and go on the offense?

These men would have sidelined John the Baptist and sent him to anger management.

They were able to climb the ladder precisely because they are weak men. They have no guts, no fortitude. They literally don't give a damn, as in your damnation, about you, beyond some intellectually dry way. They won't die for you.

What a far, far, far way we have come from the Apostles and those first centuries of martyr bishops. These men would have sidelined St. John the Baptist and sent him to anger management classes.

I watched with my own eyes when I was 14 years old, Abp. Fulton Sheen loudly, and I do mean loudly, toss out an atheist out of the sacristy of the cathedral in San Francisco.

He yelled at him: "Get out. Get out! The Catholic faith is a gift from Almighty God and I will not have you polluting it. Get out!" Watched it with my very own eyes and so did my father. I was less than five feet away from Sheen and my dad was standing in the door to the sacristy.

There is not a single bishop in America today capable of that response. And the reason why is because they are wastrels. They don't love anywhere near enough.

God help them and their enablers when they die. And they better wake up and realize their "orthodoxy" will not save them. In fact, it will add to their condemnation because they knew the Faith. They knew the right thing to do, and they would not do it because they were selfish and thought of nothing and no one except themselves.

You're all in, or you aren't at all. That's how the world will end. And that's how each soul will come to its end.

Sheen said, in the end, each soul will die and see one of two faces. Either the loving countenance of Our Blessed Lord or the horror of the face of Satan. But each will say the same thing to each soul: "Come, you're all mine. All mine."

You "orthodox" bishops and enablers had better think long and hard on that. 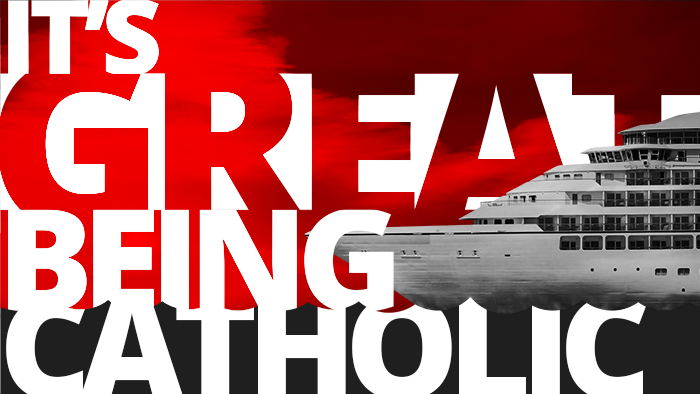 It’s Great Being Catholic
And it's time for a retreat.