It's going to be YUGE!

May 4, 2020  0
Podcast Available for Premium Subscribers

Joe Biden has lost his mind, at least figuratively.

How someone so seemingly out of touch with reality, or at least unable to express one coherent thought about reality, actually thinks he can govern as leader of the free world — well, that's nuts.

What might seem even more puzzling is why the Party of Death would want a man so obviously handicapped to be their man.

Imagine, for a moment, Biden on stage with Trump in the fall debates. The Dems had to have thought about this as well — seriously thought about it — yet there they are, in the immortal words of Tammy Wynette, standing by their man. Even in the face of the sexual assault stories they are now having to address, they are circling the wagons around old Joe.

The people who would control Beijing Biden are little else than the former Obama people.

Certainly, for those insiders terrified of a Biden vs. Trump matchup in the fall, these sexual assault allegations provide the perfect opportunity for them — a good excuse to dump Joe and move on to some other nominee.

But it's more than just a case of "Biden may be weak, but he's the best thing we have." If that's the best they have, they're in deep trouble — a man who has clearly lost a step or 37, a sex scandal during the age of #MeToo and #BelieveWomen starting to gain traction.

Biden has decades-long ties to China — the same China that Americans now have a greater negative opinion of than at any other time since polling began on the question almost a half a century ago.

For example, by overwhelming margins in a recent Harris Poll, Americans think:

And, notable with all of that, majorities of rank-and-file Democrats agree as well.

Add into the mix the Chinese commie payoff of Hunter Biden of over $1 billion, and China is a hands-down loser for Biden, especially when facing Trump.

A brewing sex assault scandal, close ties to the single country most Americans blame the Wuhan pandemic for, and a man who increasingly can't complete a sentence — if there was ever a textbook case for buyer's remorse, this would be it. But since he isn't the official nominee yet, he could be switched out. So why don't they?

Here's why: Because the people who would control Beijing Biden are little else than the former Obama people. A Biden administration would be nothing other than Obama 2.0

Joe would be an empty suit, controlled by the very same forces who propelled Obama to the White House and began the creep of destroying American exceptionalism, stagnating the economy, locking down abortion and bringing about same-sex "marriage."

Election Day is now just six months away. Every day that passes with the economy in tatters and mindless Joe tucked safely away in his basement is one more day the Marxist media gets to cover for him and blame Trump for everything.

There isn't much they can do except pick at Trump, but no one is better at pounding the drum and turning public opinion than the Marxist media. They are the leading cause why abortion remains sacrosanct, same-sex "marriage" became a constitutional right, and Hillary Clinton isn't behind bars, along with James Comey and the rest of his conspirators at Justice and the FBI.

An Obama 2.0 administration, remember, would be populated with the anti-Catholic as well as the fake Catholic crowd.

They are the reason the Russia-Russia-Russia garbage never stopped for three years, why a pointless phone call to the Ukraine led to a lightning-fast impeachment and — many believe — the Wuhan pandemic seems to be so overblown.

The Marxist crowd is the one that benefits the most from this chaos, or at least it seems to, and at least in the short term. Their senile candidate is kept essentially hidden away from public scrutiny and Trump takes never-ending incoming rounds — even accusing him of telling Americans to inject and digest bleach and disinfectant.

The Marxist media has yet again managed to seize control of the narrative, albeit with some very vocal minority opposition, and turn the entire epidemic into a red state-blue state-referendum on racism and climate change. These guys are really good.

On that last point, the globalists have had help from the Vatican and Pope Francis, who continues to pound the drum for climate change and further the looney idea that Mother Earth — Mother Nature — is throwing a hissy fit and that's why we have Wuhan.

At this rate, the Obama gang is driving the bus, just as the Obama gang drove the bus for the phony Russia investigation — spying on a candidate and those around him, shredding the Constitution in the process. At this point, Beijing Boy should just announce Hillary as his running mate and be done with it.

An Obama 2.0 administration, remember, would be populated with the anti-Catholic as well as the fake Catholic crowd so fond of funding Planned Parenthood, forcing the Little Sisters of the Poor to fork over millions to pay for abortions and the contraception mandate.

If you believe in God, you are a "deplorable." If you disagree with the elites, you're some hick who clings to your Bible and guns.

All of this is why Biden must remain: He's a stuttering stooge, easily controlled. Another nominee would have his or her own ideas — still dangerous mind you, but they would want to do things their way, not be taking orders from someone who was president before them.

In fact, if any one comment Obama made while he was candidate Obama revealed his true, unguarded self, it was what he said in April of 2008, just before the Pennsylvania primary showdown with Hillary, about small-town Midwesterners: "They get bitter, they cling to guns or religion or antipathy to people who aren't like them or anti-immigrant sentiment or anti-trade sentiment as a way to explain their frustrations."

Senile Joe clearly doesn't know up from down at this point. But Obama does, and so does Hillary and the rest of Marxist gang who thought they had, in the midst of all that hope and change, changed America. Then along came Trump — the hero of the bitter, guns-and-God crowd.

With Biden firmly ensconced, the 2020 election is really Trump vs. Obama. Make no mistake. It's gonna be YUGE! Now, they just need to somehow drag him across the line.

For Catholics who have their heads screwed on right, that's a no brainer. 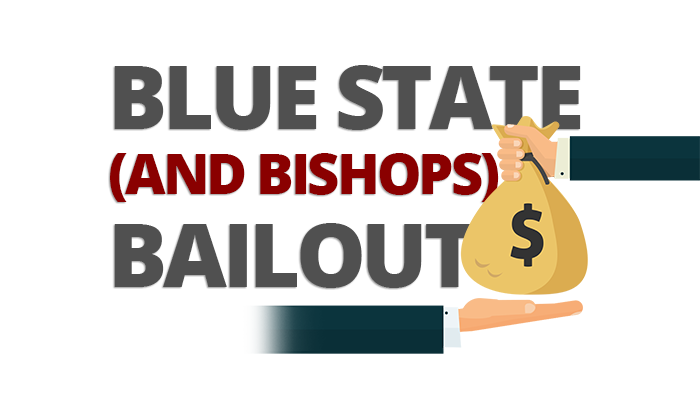