It needs to be overthrown – first, in the Church.

The world, the culture we are living in today, is essentially the making of Barack Obama. Aside from the obvious points that Biden was his vice president and Hillary was his pick to succeed him, there is much more at work in all of this.

But perhaps the most disturbing thing for Catholics about Obama's world is the high degree to which leading Catholics assisted him and still support his vision. The simple truth is that Obama won the 2008 Catholic vote with a whopping 54%. He didn't manage that on his own — far from it. This is one reason why it's so important for faithful Catholics to understand their role and the necessity for them to be involved at all levels.

Obama's progressivism was ushered in by phony Catholics who are essentially Marxists. They populated Catholic universities, political offices, think tanks and other influential positions, all while draping themselves in religious-sounding language and pushing the need for "taking care of the poor."

Obama's progressivism was ushered in by phony Catholics.

Most people wouldn't recognize the names of this corps of corrupt Catholics. Fred Rotondaro, for example, is the chair of Catholics in Alliance for the Common Good and is a senior fellow at the Center for American Progress. Fred, good Catholic that he is, wrote all the way back in 2010 that "gay sex comes from God." He made his observation in an article for The Huffington Post titled "The World Needs a New Vatican Council."

Synod on Synodality, anyone?

Then there is the largely unknown Tom Perriello, a former U.S. congressman from Virginia. He co-founded Catholics in Alliance for the Common Good, the same group of which Fred "Gay Sex / New Vatican Council" Rotondaro is chair. When Tom lost his congressional seat, he just mushed into the shadowy cabal of Marxist-minded Catholics and did a different job. In 2015, phony Catholic John Kerry, Obama's secretary of state, tapped him to oversee a U.S. government agency with a $50 billion budget aimed at coercing poor nations to get on board with the program.

Another group instrumental in getting Obama elected by subverting Catholic teaching, and making it "OK" for Catholics to vote for Barack, is Catholics United, founded by Chris Korzen. Back in the heat of the 2008 campaign, Korzen published a book titled "A Nation for All: How the Catholic Vision of the Common Good Can Save America From the Politics of Division."

Those who pay careful attention to these things, like we do here at Church Militant, will note such things as specific language. The Left is brilliant at creating new vocabulary terms, or simply hijacking old ones and infusing them with new meaning. You will recall that the "common good" became a big-time catchphrase of Obama's. Later, as President Obama, he walked onto the stage at the University of Notre Dame and droned on about that theme.

Unschooled Catholics have no idea what that means, but since it sounds good and they hear it everywhere, they sign on uncritically. Also, notice who wrote the foreword to Korzen's book — Pennsylvania senator Robert Casey, yet another Catholic politician left completely undisciplined by U.S. bishops.

On close examination of how this scheme works, we see there are multiple partnerships. This shows how all this mind-rot gets into the public consciousness — with the aid of Church leaders and their phony, unsanctioned Catholic influencers.

It involves educators and political–academic types who form think tanks and political action committees, such as Catholics United and Catholics in Alliance for the Common Good. These groups produce propaganda, the arguments distorting Catholic teaching. They are the ones who publish the books and write the articles in mainstream outlets. The think tanks always come up with initiatives, talking points and so forth, which then get carried far and wide by their surrogates on the ground, down in the trenches.

Then there is the next level — groups like the Tide Foundation and the Arca Foundation. They are the money funnelers — political "527" groups specifically set up to make sure the money keeps flowing to propaganda groups.

Then there are the real people behind all of this — the George Soros crowd. The shock troops in the Catholic world, the ones on the ground who are executing the same-minded policy, include the likes of Kathleen Kaveny. She is currently a distinguished scholar at phony-Catholic Boston College, where her bio reads in part, "A scholar who focuses on the relationship of law, religion, and morality, serves as the Darald and Juliet Libby Professor at Boston College, a position that includes appointments in both the theology department and the law school."

She is the first faculty member to hold such a joint appointment. Kaveny regularly teaches contract law to first-year law students. She also teaches a number of seminars that explore the relationships among theology, philosophy and law, such as "Faith, Morality, and Law," "Mercy and Justice," and "Complicity." In the heat of the Obama 2008 campaign, she was one of the leading "Catholic" apologists for Obama.

Perhaps the most notorious of the sellouts was Doug Kmiec. He was a Republican Catholic who nevertheless came out and endorsed Obama in 2008. He wrote articles and granted interviews, rationalizing how Catholics could vote for Obama, despite the abortion issue. He made the completely nutty argument that Obama's positions on the issues of wages, health care and the Iraq War should tip the scales in Obama's favor, despite his abortion stance.

Kmiec's sellout, which came in an article in the Marxist publication Slate, drew many eyeballs and massive controversy, but served its purpose in helping persuade Catholics that Obama was actually a pretty decent guy whose child-killing policies could be overlooked because he was "Catholic" on so many other things. The shocking summation of Kmiec's pro-Obama position was his one-liner, "One of the things I kept discovering ... was that Obama was sounding more Catholic than most Catholics I know."

Obama was sounding more Catholic than most Catholics I know.

For his treachery, Kmiec was made U.S. ambassador to Malta by Obama in 2009.

Why does all this matter? Because these same people are still around, working to undermine the Church and destroy the Faith. They haven't gone anywhere, not by a long shot. They are echoes of the very same filth spewed by James Martin and company — filth that the U.S. bishops and their staffs simply don't care to confront, for a number of reasons.

This means you have to. You have to understand not just big 60,000-foot concerns, but how this all works at colleges and parish retreats. Guest speakers are brought in, articles are published, TV interviews are granted and so forth.

It's a war conducted by a few generals, yes, but it's carried out by traitors all over the Church. It's Obama's world right now.

They must be confronted. 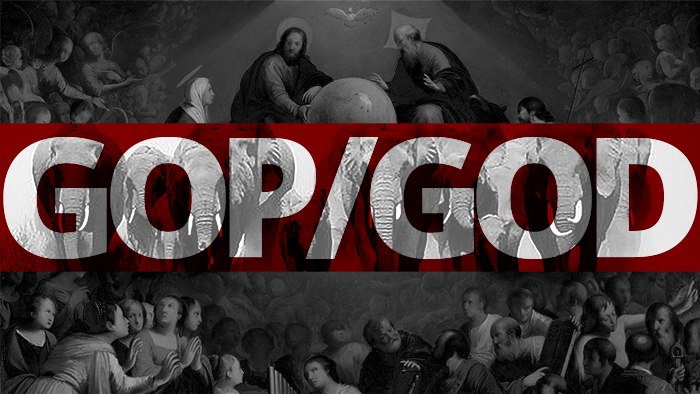 GOP/GOD
Defeat — and then convert.