And off the Catholic reservation.

The U.S. hierarchy is completely off the rails. On the one hand, they actually coordinated a phone-in campaign by Catholic voters to their congressmen to influence legislation favorable to the so-called Dreamers — children born in America to illegal immigrants. On the other hand, they have gone to no such lengths to preserve the lives of children conceived in America. If you emerge from the womb of an illegal alien on American soil, they run around organizing political efforts to help you out. If you are merely in the womb, then the effort to fight for your rights is much more muted.

The common denominator here, politically speaking, is support for anything related to illegal immigration and opposed to activist pro-life efforts. It just happens to fall within the purview of the Democrats — the very same politicians who ensure that close to $2 billion passes into Catholic social justice agencies run by the bishops. So no one can be surprised that when it comes to the bishops toeing the party line, the party we are all talking about is the Democrats. For example, where was all the hype and moral bluster from the bishops about having Catholics call their congressmen during the recent vote on the Pain-Capable Unborn Child Protection Act? How come they weren't organizing phone-in campaigns by voters to flood congressional phone lines demanding Planned Parenthood be defunded when that came up in Congress? Oh sure, a handful of them wrote a letter or a little column, but the loud voice urging Catholics to "make their voices heard" in defense of innocent life — not so much.

Fourteen supposedly Catholic senators voted to let the murder of the unborn continue, even at a stage where they can actually feel their little bodies being torn to pieces. And with the lone exception of Bp. Thomas Paprocki of Springfield, Illinois, renewing his call from two years earlier that fake Catholic Sen. Dick Durbin should not present himself for Holy Communion, you get nothing from them.

It is so obvious that a large faction of U.S. bishops are simply in bed and allied with the Party of Death because they get huge sums of money from them that it's sickening. The U.S. government gives enormous sums of tax dollars to all sorts of "charities" to help the poor. The polls let the charities administer the money and its distribution. This includes CRS, Catholic Relief Services, who promptly deals out hundreds of millions of dollars to all sorts of overseas outfits that support International Planned Parenthood and so forth. Their lame excuse is the evil organizations don't use the money from them for those evil ends but to help build wells or provide mosquito netting to ward off malaria — what a crock. Cash is cash and can be directed any which way. And when the government gives money to groups like CRS and other outfits run by the bishops, the bishops' groups get to take a cut for administrative costs.

If the government funds dried up (which they have to some degree under President Trump), if those funds were to go away, then essentially so would the USCCB and its social justice effort. The bishops' conference here in the United States operates on a nearly $200 million annual budget, and some of that budget comes from the money they get to collect for administering the government's money being doled out to groups around the world involved in varying degrees with the Culture of Death. How is this not upsetting, maddening, to any Catholic who cares about the Church?

The bishops say very little about so-called same-sex marriage while allowing a rampant culture of sodomy among their priests, as well as probably themselves. They push what boils down to a get-out-the-vote effort among Catholics to get Dreamer legislation passed that aligns with Democratic Party interests. They refuse to even acknowledge much less publicly call to task and punish fake Catholic politicians who vote to keep the architecture of the Culture of Death in place. They get rich off government funds they administer to dole out to international efforts supportive of the Culture of Death.

They drone on and on about the death penalty and pretend it is intrinsically evil when Church teaching clearly supports its use however reluctantly. They are happy to jump on the gun control bandwagon in an effort to appear hip and cool and relevant, thereby masking the real problem of shattered families, owing in part to their half-century of neglect in teaching the fullness of the Catholic faith. They issue ridiculous guidelines and harshly worded press releases whenever the phony issue of manmade climate change comes around.

On point after point near and dear to their Democratic bosses who channel billions to them, they adjust, obscure, deflect and fall appropriately silent when necessary. Abortion, abortion funding, illegal immigration, the death penalty, gun control, climate change — they might as well make Nancy Pelosi a bishop; she's more masculine than many of them. Have the bishops ever issued a statement or organized a phone in campaign saying that the government should stop funding contraception? The argument is so easily made about the negative deadly impact of that central evil in the culture that it would take next to no effort to make it — yet, crickets, not a chirp. Even when the heinous Obama HHS contraception mandate was being shoved down the throats of Americans, they didn't style the battle as one over contraception which they could have easily done. No, they chose instead the "safer" path of classing it as a "religious liberty" issue — another wasted opportunity to stand up for Christ in the public square.

This is not how successors of the Apostles behave. This is not how men with supernatural faith associate with the culture. The only people they actually call out are believing Catholics, going after them with a vengeance they should reserve for the Culture of Death. Anything that upsets the funding apple cart or even threatens it must be eliminated and destroyed. Relations with the Party of Death must be kept on as friendly terms as possible. And that abortion thing? Well, a head nod every now and then, you know. But the Modernist crowd which runs the Church these days has even found a way around that inconvenience.

Just ask Democratic Party love-child Chicago Cdl. Blase Cupich, who says that abortion is bad, really bad, but so is not having a job. Yes, child murder is just the same as being unemployed. But in a rare moment of hope, it was reported that Cdl. Cupich did call Sen. Dick Durbin, who had voted for allowing late-term abortions. But in a reality check, turns out Cupich called Durbin not about his vote to allow the killing to go on, but to make sure the Dreamers were supported. Hypocrite.

Too bad many of these bishops who have sold their office to the child murderers aren't themselves unemployed. Pray for these men. They are twisting the Faith to their own political ends and leading souls to Hell. Do they really think there will not be a reckoning? 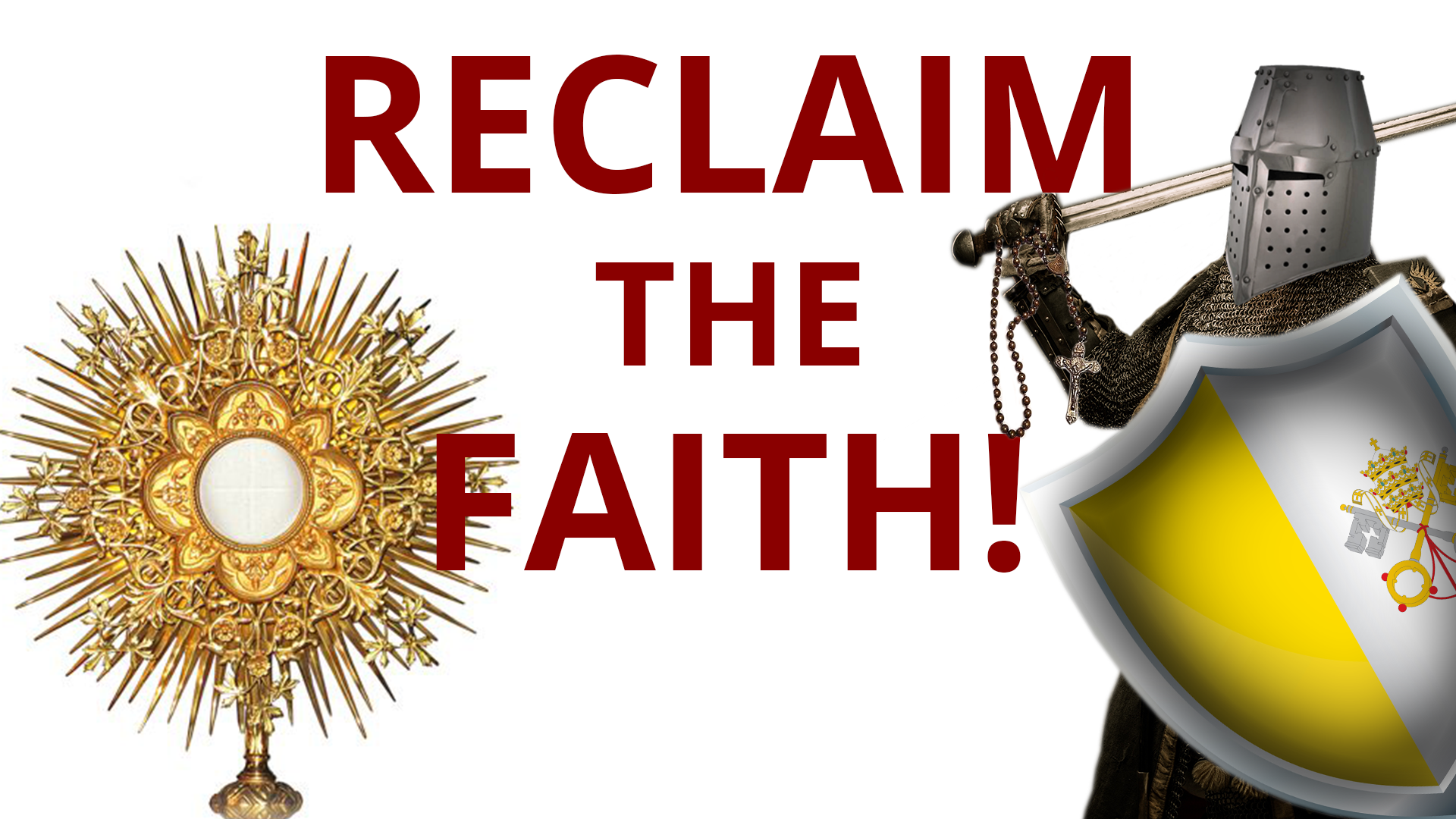 Reclaim the Faith!
And thank God for the opportunity.