Time for the Pachamama treatment.

As if deliberately misrepresenting himself about not challenging Church teaching about homosexual acts isn't bad enough, now, Evil Jimmy Martin, pro-gay Jesuit — which is redundant — is now challenging the authority of Sacred Scripture.

Evil-minded individuals always, without fail, begin to disintegrate publicly, sooner or later. It appears that time has now come for Martin.

Here's his tweet from last week that denies the inerrancy of Sacred Scripture: "Where the Bible mentions [same-sex sexual] behavior at all, it clearly condemns it. I freely grant that. The issue is precisely whether the biblical judgment is correct. The Bible sanctioned slavery as well and nowhere attacked it as unjust."

First, Evil Jimmy was tweeting a quote from an article by his liberal fellow traveler Fr. Richard Rohr, an intellectual disgrace of a priest.

Nonetheless, while the words are not his originally, he has made them his by posting and supporting them.

So, the man who says the Church's teaching on homosexual acts is wrong and needs to be changed has now devolved to saying another teaching — the inerrancy of the Bible — is also wrong.

His idiocy, intellectual and, most importantly, spiritual, is striking because it shows just how far afield Martin really is from the Faith established by Christ.

He is just the latest in a long line of biblical deniers, which first began with Lutherans in the mid-19th century and then spread to Catholic "scholars," prompting Pope St. Puis X to issue his encyclical condemning modernism.

Here's the entire problem with Martin's position that the Bible is wrong in its judgment about homosexuality being evil, which it does. If the Bible's judgment is wrong on this point, why can't it be wrong on any other point, or a multiplicity of points?

It also says Jesus is divine; have the biblical authors reached an incorrect conclusion in that regard as well?

And for the record, loads of these biblical so-called scholars actually do believe the Bible is wrong about the divinity of Jesus.

A regularly held conference called the Jesus Seminar gathers every five years and tells the rest of us which words of Jesus should actually be understood as actually His.

No surprise, they determine that very few of what Jesus is reported to have said did He actually say.

Martin exposes himself as a fraud of not just a priest, but even just being Catholic with every tweet that goes by. One wonders why, then, so few bishops ever actually say anything about him and his errors.

This latest one, an attack on Sacred Scripture, did prompt a quick denouncing from Bp. Joseph Strickland of Tyler, Texas, who said on Twitter, "Thank you for acknowledging that you question scripture. If we go down that road where do we stop? I know you have lots of support but you are challenging the Deposit of Faith that I promised to defend. As a bishop I'll keep defending it."

Others jumped in as well.

Father Dave Nix responded: "I've been saying for a decade now that the initial seed of the heresy of modernism is not liturgical novelty or 6th commandment violations, but rather the rejection of Divine Revelation in the Bible. Thanks to Fr. @JamesMartinSJ for entirely proving my thesis in one tweet."

Those observations go straight to the heart of the underlying issue in the Church today: the denial of the divinity of Christ.

Jesus routinely quoted from the Old Testament. If it contains various errors, that would mean that the Son of God quoting error is not really the Son of God.

It's pretty clear that James Martin has reservations about Our Blessed Lord actually being fully God while He was walking around on earth.

He makes that clear, for example, when he makes the idiotic claim that Jesus "learned" His mission of preaching to Gentiles from the persistent Syrophoenician woman.

This approach of undermining Scripture — and, therefore, Our Lord's divinity — is at the heart of the current crisis.

If Our Lord isn't divine, or at least wasn't while he was walking around on earth, a twisted belief attributed to Pope Francis by the atheist Italian journalist Eugenio Scalfari, then the Church and everything about it is false.

Its teachings, none of them, have any more moral weight than Islam or Episcopalianism — or atheism, for that point.

If the Catholic Church was not founded by the Son of God, fully human and fully divine, then there is no God.

The only two possible positions that are philosophically logical: Either there is no God, or there is a God and He founded the Catholic Church and Her alone.

There is no middle on this point. And, likewise, there is no compromise, no matter how much evil men like James Martin want to twist or undermine Scripture to advance the diabolical proposition that men can have sex with men and God blesses it.

James Martin needs to be excommunicated and defrocked, and bishops who choose to remain silent on his great evil, and refuse to recognize the confusion he is sowing, likewise need to be stripped and office and exiled from the Church.

The Pachamama treatment it would seem is needed for much more than just some pagan idols. 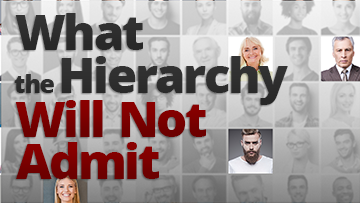 What the Hierarchy Will Not Admit
The underlying problem.