On a Mission From God

And we had better get to it.

It's a Catholic country club crowd who love their Faith, as far as they have been schooled in it, depending on who they listen to. Of course, given the dominant dynamic at work, like all other human beings, they will listen to those who most appeal to their own psychologies and predispositions.

To be certain, the Blase Cupich contingent of prelates would not be welcome here, nor would they like to attend. The prelates who attend here instead have the reputation of being orthodox, mainly politically conservative, and are much easier to stomach because they too are socially polite and enjoy quiet interactions and so forth.

The problem in the Church these days, however, requires a different psychological approach.

But there is where things can — and in many ways have — gone off the rails. Conservative personalities are very cautious, they don't like rocking the boat, they are very slow to act and, when they do act, it is usually in a minimal way. This isn't out of any malice or anything; it's just their dispositions (like many of the wealthy attendees). Birds of a feather, as they say.

The problem in the Church these days, however — the complete crisis we are seeing unfold before our eyes in lightning speed — requires a different psychological approach. It requires a disposition to admit that past strategies and approaches have been too polite, too optimistic and have failed.

That's not something that wealthy, conservative people like to face. There is a certain level of positive self-image that accompanies material wealth and admitting an unpleasant reality doesn't fit too well with that mindset. But that mindset and its concurrent failing strategy need to be jettisoned pronto if there is any hope of saving the Church in the United States.

First, the wealthy backers and patrons of many orthodox bishops must come to realize that most of these men have, in their own way, actually contributed to the crisis in the Church. They have come very late to the game — they had to be dragged kicking and screaming into the light of complete revelation that many of their "brother" bishops are actually wicked and have been actively engaged in taking over the Church and repurposing it into a globalist tool.

Many of the good bishops have, perhaps unwittingly, even gone along with this by not confronting loudly and clearly the false narratives of systemic racism, manmade climate change and illegal immigration. These are all communist talking points that wicked bishops have baptized (so to speak) and made out to sound somehow, in an intellectually tortured kind of way, Catholic.

They are not even remotely Catholic. However, even more alarming is that what passes as justice for society, which it is not, is promoted by not just bishops who are political Marxists, but who are actually morally degenerate and doctrinally deficient.

The wealthy crowd here at Napa just doesn't want to hear that: It's too much "boat-rocking." Same with their allied orthodox bishops. It's too scandalous for their ears (not to mention too threatening to their careers) to go down this path. So evil men in the hierarchy get a pass, capitalizing on the psychological dispositions of a very conservative crowd who simply do not want to face the music on all this theological and moral depravity among a certain subset of the episcopate.

This is precisely where the "orthodox" bishops, trapped in their own psychological and career dynamic, have failed miserably. Not only have they failed to openly, loudly and publicly challenge this evil, they have also failed to alert their wealthy benefactors, many of whom are here in Napa.

Money, by the millions, tens of millions, needs to be poured into efforts to root out these wicked prelates, expose them and take control of the narrative. When the news broke earlier this week that the most senior cleric in the United States who is not a bishop, USCCB general secretary Msgr. Jeffrey Burrill, is actually leading a double life of active homosexuality — in and out of gay bathhouses, homosexual hookups and all of it through a phone app he was on every day — people were shocked, and it blew up all over social media.

But why would people be shocked? Church Militant has been saying this same thing for over 10 years, earning the scorn of the gay clergy and the contempt of the polite-society crowd of Catholics, where such "distractions" aren't discussed among the elites.

"Sure, people sin, but we need to move on" is the response from the well-heeled crowd. That is beyond belief that such an attitude would dominate the response of people who might be actually able to do something about it. Bad clergy need to be exposed. That costs money. Private eyes are not cheap.

Data mining is also not cheap. Round-the-clock surveillance, flying people around who are in the know and need to deliver documents personally — every bit of this is costly.

Yes, it's distasteful, but nowhere near as much as looking into the wet eyes of an abuse victim molested by these gay men in miters and collars, nowhere near as much as listening to the families of young men who killed themselves. Talk to the good priests who have been ground up under the wheels of this lavender mafia choking the life out of the Church right now.

Sit down with the would-be seminarians who have been driven out because the gay formation team (from whom the bishops look the other way) has its say in who gets in and who doesn't. What about the countless families — mothers and grandmothers, dads — who mourn constantly that their children have left the Faith because they were never instructed properly after all those years of tuition at Catholic schools.

The Church is in what is perhaps Her worst crisis ever, a massive disbelief by both clergy and laity. And no amount of beautiful scenery and pleasant company, cigars and good food can erase that reality. So Church Militant has come to Napa to see if the events of the past three years as well as those which keep happening have red-pilled any of the crowd which is generally resistant to being red-pilled.

The Church is in what is perhaps Her worst crisis ever.

We're here, as we said, to take the temperature as well as raise it if need be. Wealth provides comfort, and comfort can prevent seeing plainly what is right in front of your eyes. The Church is not loved by hobnobbing with bishops. The Faith is not restored by a somber chat over a fine martini.

The Church is aided by rolling up your sleeves and getting in the fight, as nasty and dirty as it may be. The sodomite stranglehold on the Church must be broken. The corruption and quietism among the hierarchy must be banished. These are the driving forces why Church Militant is organizing the "Bishops: Enough Is Enough" prayer rally and protest in November in Baltimore.

Already, over a thousand people have signed up for the event in less than a week, with more coming in every day. Just click on the provided link to reserve your spot. We are all on a mission from God to stand up for the Church in this Her most desperate hour. God knew from all eternity this evil would arise at this point, and He created us for this moment.

The scandals in the Church don't end — and are actually increasing — because the men and women who have the power and influence to end them don't want to. They will not look evil in the eye and confront it, and, therefore, evil runs wild snatching souls and allowing the culture to be destroyed.

One day, perhaps soon, even a lot of money will not preserve otherwise faithful Catholics from the onslaught of Marxism in the Church. Time is quickly running out. The facade of "things are not that bad" is dissolving rapidly. 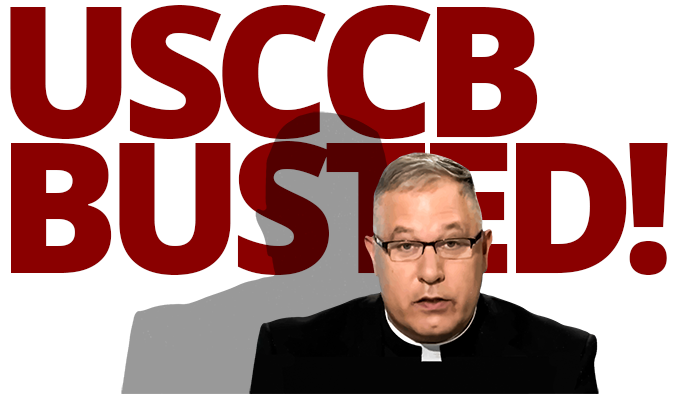 USCCB Busted!
Will they talk about it?