I'm Michael Voris, coming to you from onboard our eighth annual Church Militant Retreat at Sea.

One thing is coming sharply into focus — the bad guys in the Church are on the defensive. It seems the "dialogue" crowd can't actually handle dialogue at all. First, they want to control the tone, as some bishops were recently all hot and bothered about.

Then the dangerous celebrity bishop, Robert "Everyone-goes-to-Heaven" Barron comes out with the completely off-the-wall proposal that faithful Catholics online essentially be silenced by his brother bishops. That presumes, of course, none of the American ones have ever heard of the First Amendment of the U.S. Constitution guaranteeing freedom of speech and freedom of the press.

Then a few days ago, Cdl. Blase Cupich comes out with the gem that politics is consuming people in the Church and taking the focus off Christ. Of course, he and his fellow modernist gay and homosexualist crowd know a lot about that topic. And then again just a couple days ago, an Italian cardinal came out with the somewhat stunning pronouncement that people who disagree with the pope's policies should become Protestant.

All of this — from Barron to Cupich to Cardinal Bassetti — reeks of socialist tendencies to want to crush all dissent. Again, this is from the same group who have been talking about open dialogue for decades.

These guys are like herpes — they never go away. It subsides for a bit, then there's another flare-up.

Their whole approach stinks to high heaven of hypocrisy. As long as they are grabbing for power and influence, they are all down with "dialogue." But as soon as they get control, then they will announce who has their permission to speak, and about what, and what tone they are allowed to use and so forth. Did Joseph Stalin really die, or did he just become an old prelate somewhere and open up a training school for power-hungry, egomaniacs in robes?

In an incredible display of hypocrisy, Cupich actually kept a straight face as he delivered his "let's not be political" comments before one of the most political activist groups in the Church — a Catholic Social Ministry Gathering organized by the USCCB Department of Justice, Peace and Human Development.

That group is nothing but a political force using U.S. government tax money — meaning your tax dollars — as well as money grabbed from collection plates all over the country — again, your money — as well a tax on every diocese in the country — again, your money. They take your money and use it to promote policies that dovetail perfectly into the Democratic party's platform under the guise of fighting poverty.

Cupich said "The Church's job is not to discern which political, partisan or military force we should support in order for good to triumph ... [This] risks fragmenting our approach to social justice by giving priority to one issue or a set of issues according to our standards." How in Hades do these men have the gall to stand up in public and say these words? I guess you can do a lot when you have no supernatural faith.

Cupich and the rest of his political liberal machine have done nothing else other than fragment our approach to social justice by denying that one issue has priority. That's the very heart of the issue. It's the old worn-out "seamless garment" garbage of homopredator satanist Joseph Bernardin, Cupich's predecessor in Chicago.

These guys are like herpes — they never go away. It subsides for a bit, then there's another flare-up.

And just as galling to the sensibilities of fair-minded men, let alone Catholics, the Italian Cdl. Gualtiero Bassetti blasted negative stories about the pope's policies in the media to a group of reporters, saying if they don't like the pope's policies then they should go become Protestants:

Our Protestant brethren have neither the pope nor the bishop — everyone makes his own choices. I told someone they could make the choice of becoming Protestant if you don't like the Catholic Church — if this boat is too narrow. ... Are you not comfortable with the current pontiff? If someone does not like this pope, say it, because he is free to choose other ways.

This has gotten to the point of being nuts — it's like un-reality. Barron wants critics censored. Cupich wants pro-lifers shamed and Bassetti wants them to leave the Church because they disagree with the pope's "policies." For the record, no Catholic is ever obligated to obey a pope's "policies" — especially a pope whose "policies" reek of socialism, which the Church has officially condemned.

Hiding homopredator bishops, lying for them, covering up for them, stealing hundreds of millions supposedly going to the poor — none of that is Church teaching, but they are apparently a 'policy' of this pontificate.

Likewise, while we're on the subject, hiding homopredator bishops, lying for them, covering up for them, stealing hundreds of millions of dollars supposedly going to the poor — none of that is Church teaching either, but they are apparently a "policy" of this pontificate.

So we're curious here, is resurrecting McCarrick and breathing new life into the old monster — is that Church teaching, or is that just a "policy"? And when are we going to see that Vatican report on him — the ones that certain parts can't be revealed to the laity, apparently? Is that teaching or "policy"?

Or would Bishop “Everyone-goes-to-Heaven” Barron rule that question out of bounds and censor it? Or would Cdl. Cupich, who owes his office to McCarrick, deem it too "political"?

These men and many others just like them are disgusting, and more than that, they're an actual danger to the Church. Pray that God opens their eyes, or that He close them forever. 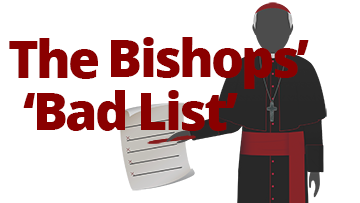