On the Way to Hell

And he needs to be told it, before it’s too late!

Before we address today’s topic, I’d like to ask if you could offer a prayer for my mom. She died 13 years ago today; and it was her sacrifice which brought me back to the Faith, as many of you know.

Now, someone has to say it very clearly, for the good of his own soul; Fr. James Martin is speeding straight toward Hell. He is lying about the Faith and deceiving many. He is one of the leading homosexualist priests in the United States and is abusing his authority and role as a priest to the press for his own agenda.

This man was ordained to be conformed to Christ, to be an alter christus, and is allowing himself to be manipulated by the diabolical to promote evil. Being a member of the ordained class does not make what he says true or preserve him from Hell.

Fr. Martin has been a longtime advocate for homosexuality in the Church. He deftly manages to push the envelope ever so carefully right to the edge, without ever coming out and admitting if he’s homosexual or if he supports sexual acts between homosexuals, but everything else he says and does around the issue indicates that he does.

He uses gay vocabulary, for example, never using the term same-sex attracted but preferring "LGBT," which is not how a Catholic priest should be speaking. The very word "gay" or the term, "LGBT" are part and parcel of the lexicon of the homosexualist movement. He has had millions of opportunities to make himself clear, but he chooses to remain wrapped in ambiguity; and after so many times, it's safe to say that he does indeed support a homosexual lifestyle, meaning he thinks homosexual acts are perfectly moral.

He’s written a new book, Building a Bridge — How the Catholic Church and the LGBT Community Can Enter into a Relationship of Respect, Compassion and Sensitivity. Wow! What a load of hogwash. First of all, notice the implication that the Church isn't compassionate or caring or respectful. The Church provides a means to salvation despite the disorder of homosexuality. How much more compassionate and caring could the Church be? But most importantly, in an interview for the book with Religion News Service, Martin finally admitted his real agenda — he wants the Church’s teaching about homosexuality changed.

The lines that irks the daylights out of the homosexualist crowd are in paragraphs 2357 and 2358 (Catechism of the Catholic Church), which say in part, "[H]omosexual acts [are] acts of grave depravity, tradition has always declared that homosexual acts are intrinsically disordered. ... They are contrary to the natural law. ... This inclination, which is objectively disordered ... "

For the homosexualists, this language has to go. Even Philadelphia Abp. Charles Chaput, seen as an orthodox champion of some kind, has agreed that the language "disordered is not helpful." Whatever that means. Clerics like Chaput and Martin offering these kinds of comments is what’s unhelpful. They both say, people don’t understand this phraseology because it's philosophical, which begs the point be made — the reason people don't understand it is because clerics have not done their job properly and have allowed their flock to be steamrolled by the homosexualist movement.

Of course, it’s disordered. The sexual powers are ordered to procreation. That’s why they exist. They don’t exist for the purpose of bringing pleasure. They exist for the end of creating new life. Using the sexual powers in homosexual acts goes against their end, their order and are therefore DIS-ordered.

There, that wasn’t so hard to explain, now, was it? We’re willing to bet that anyone who heard that could easily understand what’s meant, whether they agree with it or not. It’s not a hard concept to get your mind around. But bishops have been so unwilling to even mention any of the sexual sins for the past fifty years, that they have created a vacuum that clerics like Martin have rushed in to fill. Having passed on their role as teachers, they have allowed distorters to come in, and boy have they come in.

As an aside, think about this for a second. Why is a layman standing here warning a priest that he is on his way to Hell instead of his superiors or bishops? Well, we know why. Martin, in the recent interview promoting his gay propaganda as theology, said the following, "[S]aying that one of the deepest parts of a person — the part that gives and receives love — is disordered is needlessly hurtful. A few weeks ago, I met an Italian theologian who suggested the phrase 'differently ordered' might convey that idea more pastorally."

First of all, notice the appeal to emotions and not the Truth. It's hurtful. Well, sometimes Father, the truth hurts, and the Cross just has to be carried. And that's true of everyone on earth. But most importantly, notice the complete sleight of hand here. To suggest that "differently ordered" would be good to use instead of "disordered" is to completely change the the meaning of Church teaching. It’s a lie.

Fr. Martin wants to make homosexuality out to be just a different thing with its own order, that we must respect and have compassion for. When he keeps talking about compassion and care and respect, he deliberately blurs the line between the person with same-sex attraction and the sexual acts. He blurs a further distinction between sexual acts and giving and receiving love.

One need not have to engage in sexual acts to love another, and likewise, just because a person does engage in sexual acts, does not mean they love. But see, to bring forth these critical distinctions would completely destroy Martin’s position; and he knows it. That’s why he lets them just hang there in the ether.

He diabolically twists "objectively disordered" into "differently ordered" and leaves unchallenged the assumption that one must engage in sexual acts if the person loves. This kind of evil on the part of a priest can only merit Hell, if unrepented. If he died unrepentant of this gross calumny against the Faith, how could he possibly hope for salvation? He is a tool of the demonic powers in confusing many people and leading people into Hell with him.

None of this said to be mean and all those stupid charges. It’s said out of a terrible concern for his soul. No Catholic could ever want or hope for another person to be damned, much less a priest. Especially a priest. St. Teresa of Avila said that when she was shown Hell, she could distinguish which souls were those of priests because of the intense agony they felt in their hands — the horrible burning where the holy oils had been administered to them on the day of their ordination.

But if that be not enough to turn this priest from his evil thoughts and actions, then at least let it serve as a warning to those who might listen to him. Do not. He is possessed of evil. Fr. Martin is on the way to Hell by his own choosing. Whatever demon he is wrestling with has gained the upper hand over him; and he has completely succumbed to him.

Pray for him that he might regain his strength and fight with everything he has to turn off the road to Hell. In the meantime, fight and resist all this kind of evil and demonic infiltration that has accomplished so much, through wicked clergy. 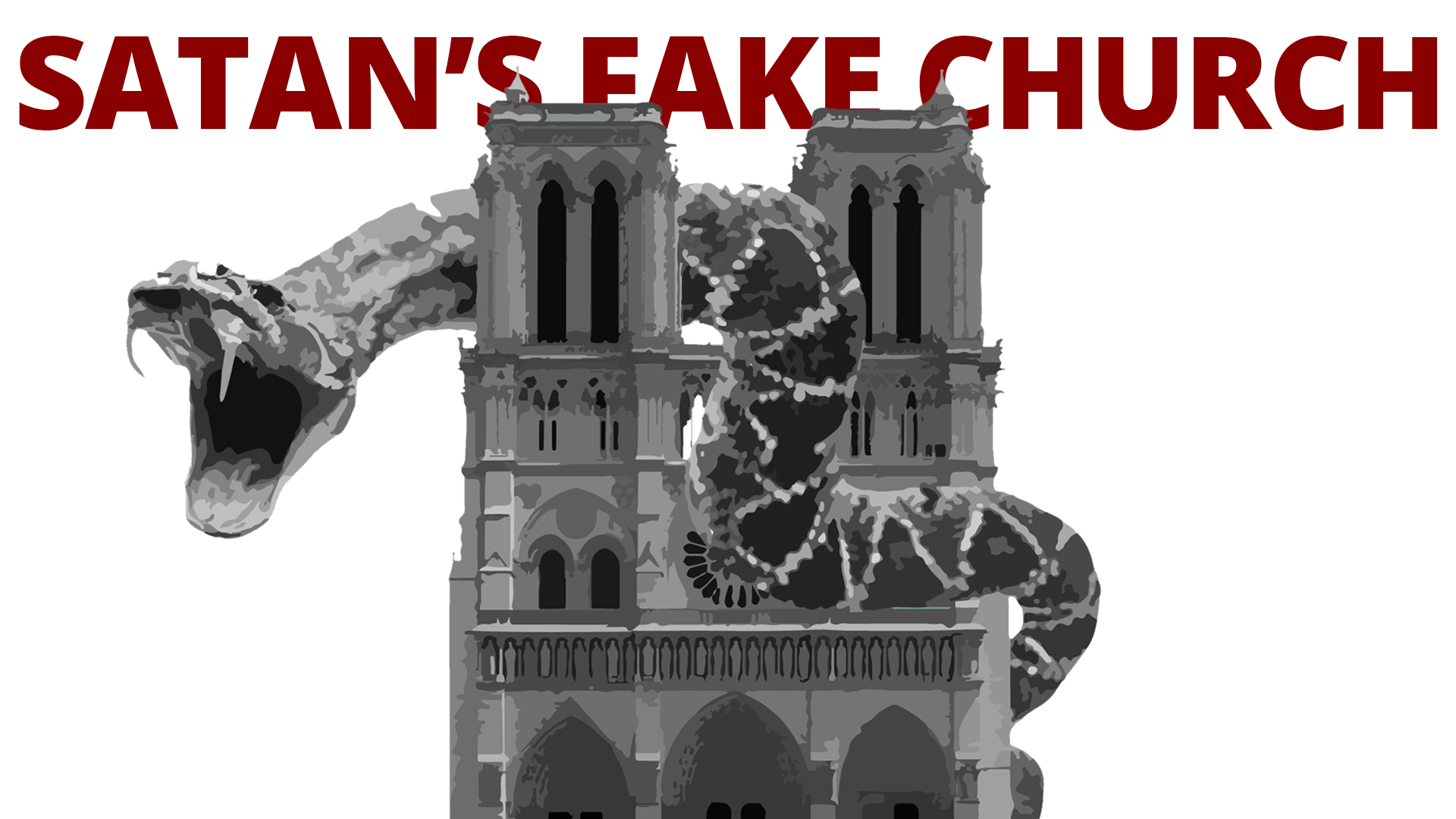 Satan’s Fake Church
It is the mystical body of the anti-Christ.