In many ways, it's hard to believe, but 2021 marks the 15th year of St. Michael's Media/Church Militant. During this time, we've watched the world — and especially the Church — turn to a much darker path.

Lies, cowardice, theft, corruption: It's all enough to make one lose heart if you only concentrate on that. But at Church Militant, we don't concentrate on the evil. We expose it, and then counter it with Catholic truth.

We didn't start out this way. Back in the day, we were pretty naive about the filth in the Church. Like many, we didn't have the slightest idea that the ills that had befallen the Church were not just accidents.

They were actually engineered over the course of a century — especially the last half-century — to deliberately smother Catholic truth. Many people fell for it, especially Catholics who, having received no truthful, authentic Catholic teaching, left. About half went to other religions, and the other half just stopped practicing or professing any belief.

At Church Militant, we don't concentrate on the evil. We expose it, and then counter it with Catholic truth.

The wicked bishops who brought this all about, many of them dead now, will face or have faced their judgment before Almighty God. Those who were damned will have deserved every bit of their punishment for stealing from the flock, stealing the truth. But, in our first days, all we recognized was that many Catholics (as well as others) just didn't know the Faith. It would only be later that we came to understand why.

So when we launched this work, our flagship show was The One True Faith, hosted by yours truly. The response was remarkable. People contacted us constantly, saying things like, "I've never heard any of this before. Why was I deprived of this? I went to Catholic school for years."

On and on the stories flowed, each one revealing the depth of ignorance on the part of so many, an ignorance that wasn't their fault. They had been deliberately denied the truth and had chosen to live their lives accordingly. And, in many ways, that's understandable. In fact, many people who work here every day at Church Militant were once in that same boat — all of us realizing something was wrong, but not exactly sure what and certainly not sure how to find out.

Many drifted into Protestant congregations, some of whom were at least preaching some truth from Scriptures (as opposed to many Catholic priests who were preaching evil by actually twisting Scriptures to support immorality). What no one was saying was that Scriptures belong to the Catholic Church. It was the Church that complied the canon of Scripture, translated it and preached it to the world (until wicked clerics came along and began to undo all that).

We produced more than 100 episodes of The One True Faith, 8 seasons of 13 episodes each, touching on absolutely every topic you can think of regarding Catholic truth. Of course, as the show gained in popularity and drew more eyes, the wicked clergy — especially here in Detroit — started to get all hot and bothered and come after us.

They didn't like our "tone," they said. It was too confrontational, too muscular, not gentle enough. When we were struggling through all this (and not understanding their assaults), a good priest reminded me of one very real truth: "When you are being persecuted for doing what is good, you should be happy. Rejoice and be glad, for yours is the Kingdom of Heaven."

This is just a small sample of the wisdom of the Church you will find here on Church Militant as a Premium member. The world is in its current condition because of the lack of conviction of Catholics and the ignorance of men of goodwill (who have never encountered the fullness of Christ in His Catholic Church).

The world is in its current condition because of the lack of conviction of Catholics and the ignorance of men of goodwill.

Please sign up today and become a Premium member here at Church Militant. Channel the justified anger you have at the current political and cultural scene in shoring up your spirituality and theological knowledge. Church Militant Premium is only $10 a month, and it not only goes to the Premium work we do but also helps defray the cost of every other program you get for free, like this Vortex episode, for example.

Vortex and other things here at Church Militant are free to you, but they aren't free to produce. All this week, we'll be spotlighting just a small sampling of Premium programs we have — thousands of episodes — in the hopes that you will sign up and watch them. And if you are a Premium member, then take this as a gentle reminder to view them anew.

There is a great cultural war raging, and at its heart is a spiritual conflict — the war for souls launched in Eden and existing in every single man's heart. No man can win that war without being grounded in truth as a first priority. So, please, sign up today. Help us help you while you help us to evangelize the world. 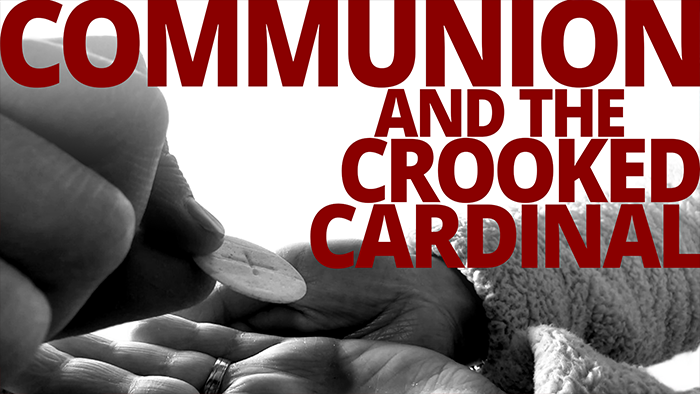 Communion and the Crooked Cardinal
Nothing is as innocent as it seems.