Because smearing faithful Catholics is all they have left.

So there is a bishop in the diocese of Crookston who is hot and bothered by plans by a group of lay Catholics there to hold what they are calling a "Roman Catholic Revival" event.

But what he's really ticked off about is that the lay faithful have invited Church Militant to be a speaker at the event — namely, me.

The news got back to Bishop Michael Hoeppner and he couldn't wait to denounce the event for inviting Church Militant. Here's part of his official statement: "The divisive tactics often used by Mr. Voris and Church Militant are contrary to our call to live as missionary disciples. Although Mr. Voris may be sincere, I consider his approach more destructive than fruitful."

So let's ponder this condemnation for a moment, shall we? First, the word "divisive." So what? Was not the Son of God "divisive"? Did He Himself not say, "I have come to bring the sword"?

Read more about allegations of Bishop Hoeppner's blackmail and cover-up.

The problem with so many in the hierarchy today, presuming all the good will that can be mustered and the most charitable spin that can put on it, is too many of them suffer from horrible philosophical training.

Their foundations are made of peanut butter. This is a perfect example of it. There is an immediate thrusting forward of the notion that "division" in itself, division per se, is a bad thing.

Well, Your Excellency, isn't that why prisons exist? To divide criminal from the rest of society. Isn't that why doors have locks and cars have keys? To divide rightful owners and occupants from those who are not?

And going all supernatural, isn't that why there is a Heaven and a Hell? The ultimate reality of the Christian faith is that every man and woman will be divided from either one or the other segment of the human race.

The Lord God Himself thundered that truth at the serpent in Eden, when He spoke of putting enmity between (meaning dividing) the serpent from the Woman, his offspring from Her's.

But turning 180 degrees to when you say our "approach" is more destructive than fruitful, question: Have you issued such a statement against James Martin, and please don't fall back on, "he hasn't come to my diocese"?

So excuse me when we say it's more than a little hypocritical for you to say Church Militant is divisive and all that, when we have never preached one word against the one true faith — far from it, in fact — yet you have remained silent in the face of perhaps the most visible destroyer of the Faith that practically none of your fellow bishops — not you have given one ounce of pushback against.

Is it perhaps because you know that the homosexual hive of cardinals and archbishops in the United States like Blase Cupich or Joseph Tobin would be all over your case and bring an end to your ecclesiastical career as fast as you could say "homoheresy"?

Or, and perish this thought, is it perhaps because you actually agree with Martin's string of heresies? So are you a fellow traveler heretic or just a coward?

How exactly is what we say "unfruitful"? Would you like to meet with me in person that mid-September weekend when Church Militant is in your diocese and discuss the hundreds, and quite possibly thousands, of people who have either come to the Church, come back to the Church or grown stronger in the Faith because of the work we have committed ourselves to here at this apostolate?

Because I would certainly welcome that opportunity, as I have extended an invitation publicly to James Martin to discuss his evil, an invitation he has so far ignored.

You mention in passing that I may be sincere — thanks, shepherd, for the faint praise. Have we ever said or done anything to make anyone think our work here is not born of sincerity?

We publicly offer our Rosary every day for the restoration of the Church and all the clergy, including bad bishops. Every person on this staff makes large sacrifices to work here — personal, financial and likewise.

We travel the world at great and exhausting effort and speak before combined audiences of many thousands to help shore up their faith and convince of the rightness of the one true Church established by Almighty God.

I could go on about the level of sacrifice that this apostolate makes but I want to mention two points.

First, we and other similar apostolates exist because you bishops have completely abandoned your duty as father and shepherd. You collectively do nothing to exhibit a love of the sheep, of Our Blessed Lord or of His Holy Catholic Church.

You have sucked all reverence form the Mass, handed the sheep over to clergy largely comprised of perverts who you ordained, and we are not speaking of just child molesters.

You have sat atop the greatest meltdown in the history of the Church, and your answer is for all of us to be a "joyful band of missionary disciples" — joyful as we watch our friends and family walk away from the faith and perish? You and your like are hypocrites.

You use the Church as a political weapon to advance the cause of the Party of Death in America and dress up that agenda as religiosity.

You never stop about needing more money from the flock — billions — and yet you turn around and use that money to support thousands of homosexual men in the priesthood and to pay off the legal fees for their crimes.

You have brother bishops who promote and return to ministry known active homosexual men. You support a perversion of the Faith across the board in liturgy, catechesis, evangelization, seminarian formation, all of it designed to usher in a "new" Catholicism over the past half-century.

And by the way, for the record and to underscore the point, it isn't the offices of Church Militant that are being raided across the country by law enforcement and staff here being imprisoned as a natural result of their having given up the supernatural.

Why do you think Catholics in your diocese, as well as many others, feel the need in the first place to start forming Resistance groups and ratting you all out to law enforcement and have conferences headlining the theme of a Roman Catholic Revival?

Curious if you have any plans in the near future to issue a statement about any of that; or, for that matter, any of the suits you have had to settle in secret for predator priests that you deliberately failed to report to police.

To read much more about Bishop Hoeppner's "concern for the sheep" and "non-divisive" actions, please click on the provided link to our article which, in part, details how he had to settle a suit brought be a deacon who he blackmailed.

And of course, if you'd like to know more info about the actual "Roman Catholic Revival" event in Crookston, it's being held at Wildwood Park in Crookston, Minnesota on Saturday, Sept. 14, the Feast of the Exaltation of the Cross.

More details are available on the Facebook page. There's a phone number provided for those who have any questions, etc.

This disaster which has befallen the faithful has been orchestrated by wicked men in miters, and it is a great evil for them to try and beat down a resurgence of the Faith that, in part, seeks to expose their evil.

See as many of you as can make it in Crookston this coming September.

And offer a prayer that Bishop Hoeppner would be willing to meet with us, at least privately, as a good number of his brother bishops have. 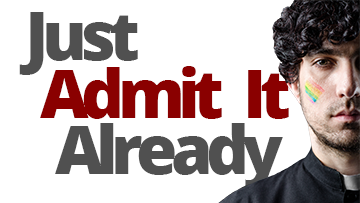 Just Admit It Already
The corruption is beyond the beyond.