It was one year ago today that my father, Russ Voris, passed into eternity. It has been a very tough year for me. We had become best friends.

He came to live with me 10 years earlier — not because he needed to, but because I needed him to. The apostolate was undergoing enormous challenges and start-up financial troubles, and my personal savings were gone.

So my dad moved in with me so my house wouldn't get foreclosed on. That was all more than a decade ago.

I mention all this not only to ask for your continued prayers for my dad — my mom as well, of course — but also to underscore the importance of sacrificing for the sake of the Church.

My dad wasn't actually all that thrilled with the idea at the beginning — actually somewhat resistant to it. My mother had died a couple or so years earlier and he had settled into living his life with much privacy and independence.

He was fully healthy and not really dependent on anyone, and he was even enjoying it. So when I told him of our predicament and brought up the subject of the apostolate's financial struggles as well as the looming concern that I might lose the house, he immediately understood that, even in his advanced years, he had a duty.

Now, he didn't actually like the duty. But my dad, like many men of that generation, understood that being a man oftentimes means doing things you don't want to do.

In some way, he was called upon like Abraham was — in his later, elderly years — to go out and do the work of God. To be very clear, had my dad not agreed to move in with me and start paying my mortgage, it is highly probable that there would be no Church Militant today.

Once he agreed and moved in, we had some, looking back on them, kind of funny father-son moments. I came home from the studio one night a little later and my dad had actually stayed up to tell me not to leave my dishes in the sink when I left for work. He also added that the garbage needed taking out.

As time went on, we spent probably thousands of hours talking about the horrible state of the Church.

If only today's bishops could be men like my father: disciplined yet compassionate and driven by duty, by the understanding that there is a cause greater than them, and oftentimes, that cause must be sacrificed for.

The horror that has infected the Church would vanish in a heartbeat. My dad never brooked disorder, things being out of place and so forth, and that was just with dirty dishes being left in the sink.

This disorder running rampant in the Church, encouraged by homosexual bishops and their errant teachings, used to drive him out of his mind.

He would often say to me, practically daily, there's no way these men believe the Faith.

There's no way they believe in Hell or, heck, even that they die, because they act like they never will — never will die and come face to face with the God they have betrayed, and there will be nothing for them when that moment arrives, other than everlasting fire prepared for the devil and his angels.

For the past year — of earth time — my dad's love and fidelity for Our Blessed Lord and Our Lady, his deep, deep love of the Catholic faith, has been rewarded and will go on for eternity.

Even if he is still in Purgatory, which is most likely not the case since I had three sets of Gregorian Masses offered for him, he is still a saint. He is saved, safely out of the reach of the demonic forever. He died in a state of grace, in the full embrace of Holy Mother Church. His life was a success. He achieved his destiny — nothing else matters.

He may never be declared a saint by the universal Church, but most in Heaven aren't. Can we say the same for many of our spiritual fathers? They don't even think in these terms, or if they do, they sure are pretty quiet about it.

But see, when you are in love, you can't keep quiet about it. My dad loved the Faith, he loved truth, he loved the Church because it is Christ here on earth. And he loved all of this because he loved Our Blessed Lord.

How sad, how tragic, that most leaders listening to this would not agree with it, would object to it on some level. If only more of our bishops and priests were more like my dad — if only.

Eternal rest grant unto my dad, O Lord, and let perpetual light shine upon him.

Dad, get me home safely as well. 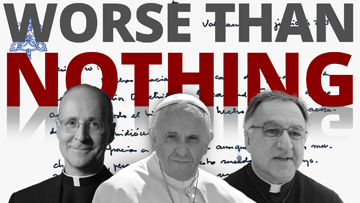 Worse Than Nothing
A little silence would have been welcomed rather than what we got.