Last week, Church Militant received word that we're being accused of committing a crime, and the accusation was made in public, on stage, in front of hundreds of people and videotaped and spread on the internet.

The great accuser was celebrity priest Fr. Larry Richards. Here's what he said: "You know, a couple months ago, I said something about Church Militant, and they threatened to kill me. Literally. I got death threats from a good Catholic organization that wants me dead in God's name."

There is not a single syllable of truth to what the troubled cleric said. And yes, we underscore troubled on purpose because to accuse someone publicly of threatening to actually kill you, when you know it's not true, reveals a troubled mind.

With the exception of actually staging an attempted assassination and calling the cops, this is no different from what Jussie Smollett did.

And since it's coming from a priest, it goes way over the top.

Church Militant — not a soul here has ever threatened anyone's life, including Fr. Larry Richards, and the charge is not only disgusting and meant to destroy our reputation and good name, it also rises to the level of accusing us of criminal activity.

To my knowledge, Church Militant has never said anything publicly about Fr. Larry Richards prior to this rotten situation. I will allow that perhaps — perhaps — his name may have been mentioned in passing on some rare occasion but without malice or dissection of him.

But the same cannot be said of him in relation to us. Richards has called us every name under the sun prior to this latest incident and has popped a few screws whenever we come up in discussion.

On his program aired on EWTN, a listener called in and mentioned us, and here was the reaction.

After a slew of comments angered at Richards' tirade, EWTN took the video down, along with the comments.

As you know, there are loads of folks in the establishment Church who do not like us. Many of them hide behind the excuse that our "tone" is wrong, when in reality it is the content, not the tone, that they rage against.

Much of the establishment Church is populated with homosexualist clergy, like James Martin, of whom Fr. Larry Richards is a supporter.

Richards has said in public that he would attend a same-sex "marriage." He has called Church Militant divisive because of how we point out the sins of the hierarchy, which they excuse of themselves.

Philosophical question here: Is it really divisive to point out a pre-existing division with the aim of pointing it out so it can be ended? Just a question.

A huge number of bishops in the United States have made things pretty clear that when it comes to choosing between faithful Catholics or the homosexualist clique that dominates the Church, they will choose in support of sodomy every time, as was proven as recently as last month in Rome at the phony-baloney sex summit dominated and controlled by homosexualist prelates.

Richards has aligned himself with that crowd. That's a shame, but it's the reality. He has attacked us by name — publicly, multiple times — and seems to regularly get back around to the issue of homosexuality when he does so.

This most recent time, standing in front of the rich Catholics group Legatus at their annual convention, he went a step further and accused us of a crime.

This time, we can't let that go. While his attacks against us portraying us as not of God and being demonic while filthy charges coming from the mouth of a priest are legally protected free speech. But to accuse someone of an actual crime demands a response.

As an aside, Richards' social media accounts got flooded with negative comments in the aftermath of his ravings at the Legatus convention, and LifeSiteNews even did a story on the affair.

In the wake of that, Richards posted a late-night tweet last week, seen by two or three people, where he half-heartedly, kind of, sort of, made what might sound like an apology in some circumstances in some other universe — transferring the charge of a death threat from Church Militant to a Church Militant supporter.

Show the proof of that claim, Father. Release the person's name. Did you file a police report? Why didn't you call us here the instant that alleged event happened?

That tweet is pathetic and does nothing to mitigate the scandal you have caused. His comments went far and wide on social media. We received a flood of communications asking what's going on, and fortunately, it does seem that most people don't believe his baseless ravings.

Nonetheless, because of the gravity and criminal nature of his charges — and the fact that this is a very public action — we are going to share with you publicly our response to Richards.

Our attorney has drawn up and sent a cease and desist letter directly to Fr. Richards, which contains demands.

We have attached a link to the full letter on this page.

First, write a letter to Legatus apologizing for the false comments and clarifying that Church Militant has in no way made any death threats against you and that you ask Legatus leadership to issue a letter to its membership informing them of your retraction.

And secondly, that you make yourself clear and explicit on your EWTN radio show Open Line, which is also available on YouTube, that you lied about us and no one from Church Militant ever threatened to kill you or has ever threatened you in any way.

If you do not accede to these demands immediately, there will be further action, take it to the bank.

What a horrible state of affairs that in the Church we have come to these kinds of situations where clergy lie about laity who want nothing more than the modernist errors and dissidents currently in control of the Church to be exposed, and the laity are forced to hire lawyers to defend their innocence.

What a complete embarrassment. Fix this, Father. Fix it now. You wrote a book a while back extolling the masculine virtues. It was called Be a Man. 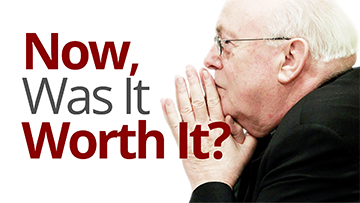 Now, Was It Worth It?
Like Hell it was.