A century-long plan coming to its fullness.

There is no doubt — no doubt whatsoever — that the very existence of America is on the line this coming November. For Catholics, most of whom have homogenized into a barely warmed-over pagan culture, this might not be on their radar.

It will, however, be front and center if the communist Democrats and their demonic duo of Biden and Harris win. The Marxist Democrats have all the pieces in place to topple whatever remaining vestiges of freedom and the so-called American dream remain.

Interestingly, among the various immigrant and credal populations that seized hold of the American dream were Catholics. They came to America by the millions during the influx of immigration around the Industrial Revolution and integrated better than any other group. As it turns out, they integrated too well.

After massive discrimination and killings and exploitation, they survived and eventually thrived. They fought off enormous hatred from the ruling Protestant class and made their way against pretty steep odds. Perhaps the single hallmark achievement of the Catholic struggle was Catholic education and, eventually, the crown jewel: the Catholic university.

Until the Sexual Revolution of the Marxists in the 1960s, Catholic universities and colleges turned out leaders, visionaries, men and women who would be able to shape the course of history, informed by their Catholic faith. But that all changed almost overnight — almost overnight.

Remember, this revolution was embraced by Catholic colleges and universities across the nation during the Sexual Revolution.

While Fr. Theodore Hesburgh had lots of help in overthrowing Catholicism at Catholic schools, it was his personal efforts that served as catalyst to the whole movement. In 1967, Hesburgh pushed a document known as the "Land O' Lakes Statement" which destroyed the Faith on Catholic campuses all over the country.

The major author of the document was homopredator Theodore McCarrick — a man who seems to have had his fingers in every single effort to blow up the Church. Secular schools were doing the same, but those were secular, not Catholic.

Nonetheless, for the Marxists to make strides under the Catholic umbrella was a level of success even they had only hoped for. Generations of subversives were born of the Sexual Revolution — the only fertile aspect of that movement.

Millions of graduates were unleashed in the world of academia, science, the Church, the courts, government, business — all trained to destroy. And each year, their numbers increased, until today: They are in near-total control. Boardrooms all over the country have been taken over; human resources departments, senior management and so forth.

As the BLM protests and violence have engulfed certain American cities, giant businesses actually cheered them on and financed them. Look at the donors list of the Black Lives Matter Global Network Foundation. It reads like the Fortune 500: Amazon, Microsoft, Nabisco, Gatorade, Deckers and other large American firms.

In his 2001 book, The Long March: How the Cultural Revolution of the 1960s Changed America, Roger Kimball said those students from the 1960s (and following) have graduated, and they are now part of the government and large corporations, subverting Western culture from within.

That book is 20 years old. It's only gotten much worse. And to prove the point, many of you know that Church Militant got deplatformed by Vimeo (our video hosting service) earlier this year. Just this past weekend, we learned that Amazon has removed Church Militant as a recipient of charitable donations from their purchases.

So if you have been funneling a portion of your purchases to Church Militant through the "AmazonSmile" program, that is now over. If you are a faithful Catholic, you are being stood up and mowed down — even from within the Church.

For example, former Notre Dame Fighting Irish national championship coach Lou Holtz publicly castigated phony Catholic Joe Biden for his phony Catholicism. That, of course, brought down the ire of the emasculated president of Notre Dame, a weak excuse of a man — Fr. John Jenkins — who rushed to Biden's defense and torched Holtz for calling out the fake Catholic.

Holtz forgot to mention Fr. Jenkins as another fake Catholic. Jenkins said we should never judge the sincerity of someone's faith. But he did just that when he gave the university's highest award to Biden in 2016, the Laetare Medal, given to an American Catholic "whose genius has ennobled the arts and sciences, illustrated the ideals of the Church and enriched the heritage of humanity."

Yeah, that's Joe all over. As long as you made it past the abortionist's razor-blade vacuum-suction machine slicing you to ribbons, then you could be a witness to his genius upholding the ideals of the Church. Do any of these men realize they are on the road to Hell — to eternal damnation? Probably not. Not as long as Barron and company keep whispering in their ear they have a reasonable hope of being saved. (They don't.)

Too many U.S. bishops are part of the Marxist plot to overthrow America.

This entire crowd of anti-God and anti-American subversives keeps telling us America is evil and must be punished for our sins. Systemic racism is the rule of the day, multimillionaire athletes (most of whom are black) keep saying.

In fact, what percentage of these black athletes, crying about violence towards blacks, have actually murdered their own children through abortion (thus directly attacking the lives of black Americans)? These athletes possess enormous fortunes, fortunes which provide them with lives of however much sex they want.

How many abuse women and then murder the black children in the wombs of those women? So please forgive us if we roll our eyes at your hypocrisy of holding your fists in the air and ignoring the blood running down your own arms.

This past August, Catholic attorney general William Barr laid out the plan of the Left in an interview with Mark Levin. So how is it that a faithful lay Catholic like Barr can see this and say it but Catholic bishops can't? Oh yeah, that simple little word: "Faithful." Most of the bishops are not, and the laity speaking the truth are.

It's just that simple. Remember, this revolution was embraced by Catholic colleges and universities across the nation during the Sexual Revolution. The bishops today, the heirs of the original wicked bishops, have done nothing to prevent the evil from spreading (and, in some notable cases, have worked to advance it).

As Our Blessed Lord said to the wicked religious leaders of His time, "How can any of you escape damnation?" Too many U.S. bishops are part of the Marxist plot to overthrow America because America must be taken off the board in order for them to achieve global dominance.

Yeah, this election is that important. It is, in fact, for all the marbles. 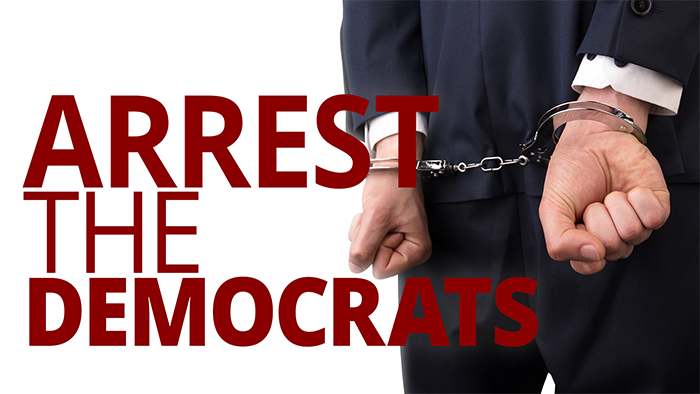 Arrest the Democrats
The great 'scamdemic.'