As it should be.

Good news at last from Rome and the Amazonian Synod — although the Vatican itself is furious over it.

The pagan idols that the Vatican had brought into the synod were surreptitiously taken in the early hours of the morning from the Church they were located in and tossed into the Tiber River from the Ponte San Angelo.

Here is the moment that five of the idols of Pachamama were pushed off the rail from the bridge and into the Tiber.

It's uncertain precisely how many of the idols are in Rome — at least five were in the Church of Santa Maria Transpontina.

But, in addition, there is at least one in the hall where the synod is actually going on and perhaps another simultaneously in St. Peter's Basilica. But in either case, there are at least five of them no longer desecrating the Church.

Church Militant contacted those involved and received the following statement as to why they took the statues and threw them into the Tiber.

This was done for only one reason:

Our Lord and Saviour Jesus Christ, his Blessed Mother, and everybody who follows Christ, are being attacked by members of our own Church.

We do not accept this! We do not longer stay silent! We start to act NOW!

Because we love humanity, we can not accept that people of a certain region should not get baptised and therefore are being denied entrance into heaven.

There is no second way of salvation.

Of course, the Vatican is reacting with outrage — calling the action "theft."

The Vatican response itself is now causing a stir among faithful Catholics who are sick and tired — fed up — with the constant pandering to false religions and disrespecting of traditional Catholicism.

Undeterred, the Vatican followed up with more.

What the incident proves and the Vatican response underscores is just how completely out of touch this pontificate is with the only Catholics who actually matter in a sense — the ones who believe.

This was a necessary act. It had to be done. And hats off to those involved.

The response from the Vatican, specifically Ruffini, shows that they just don't get it. He said the idols represent Mother Earth — exactly.

That's the point. Mother Earth is a goddess in pagan cultures. Even in America, Wicca worships Mother Earth and New Age groupies call "her" Gaia.

This is not some meaningless statue. It represents an entirely different and contradictory world view from that of the Church.

It's disgusting they were even in Rome to begin with, and by now, they are probably somewhere out in the Mediterranean.

"I am the Lord your God; you shall not have false Gods before me." 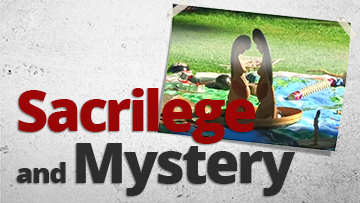 Sacrilege and Mystery
Non-stop questions. And the continued lack of clear answers.