Peas in a Pod

Couldn't be closer in their cowardice.

The parallels between Church leaders and government leaders is so striking, it'd be comical if it weren't so desperate.

There are wicked men in each camp, no doubt — not just bumbling fools, but actually wicked men who work to subvert and overthrow their respective institutions' missions.

But lay that crowd aside for a moment and let's look at how that group is able to succeed.

As we look out over the election and all the fraud and cheating and theft and disenfranchisement that has occurred, it forms a nice backdrop to actually have this larger discussion.

Let's just jump to the end of the story first and then come back and fill in the details.

All of this has occurred for the very simple reason that it was allowed to occur. And now that it has all become public, it continues for the same reason — because it is allowed to continue.

They are never confronted by the men in their own ranks who know the truth.

Yes, there are wicked, deceitful people doing the dastardly deeds and crimes, but they are able to get away with all of it because of the cowards who do nothing to prevent them or fix it.

The exact same thing is true in the hierarchy, hence the parallel. There are wicked, evil men with miters who seek to destroy all that is good. That's always going to be the case, everywhere, until the second coming.

But they are able to succeed to the extent they are allowed to succeed — permitted by self-interested cowards afraid to confront them and bring an end to it. This crowd is the real issue, not the wicked destroyers. Those men will always be around. They are sick in the head, invested with noble goals given them by God in the Church and the people in the government setting, yet they pilfer and loot and plunder at every turn.

Fine — they are part of the landscape of fallen humanity. But the extent of the damage they can do is entirely dependent on the response — the confronting of their evil by those who should be doing it.

In 2002, when the news broke wide open about the homo-sex abuse going on in the church, and more importantly the cover-up, the "leaders" promised they would fix it.

Liars — they did no such thing. They fixed nothing, instead developing a plan which further insulated themsleves from the fallout — a plan designed by the most notorious offender among them — Theodore McCarrick, whom many of them knew the truth about.

For all their chest-thumping and phony acts of humility signaling, nothing changed as bishops continued lying, covering up, protecting homopredators, abusing victims again and so forth.

It wasn't until almost 20 years later that the McCarrick news revealed the reality. So the cries came from them again: "Oh, we'll get it right this time. We're going to make all the laity take classes."

Meanwhile, they totally ignore and even deny the root of the problem has been (and still is) their own embrace of all things gay. The bishops fight for gay rights and never shut up about the topic, almost as though it were personal. Hmmmm.

In the process, all they are supposed to protect, the innocents placed in their charge, are betrayed time and time again.

Stupid phony evangelization programs are trotted out about every 18 months. Catechesis programs insulting to anyone with a brain are spotlighted left and right. And people continue to fall away. The truth is denied and the gay bullies in the Church — whether they are in the pulpit, the choir loft or the chancery — are allowed to get away with spiritual murder.

Why? Because they are never confronted by the men in their own ranks who know the truth. Weak bishops — not the wicked ones here, weak men as bishops — are a scourge, period.

Who is damaged by this cowardice, this lack of willingness to do one's duty? The innocent, as usual.

Now, to show the parallel in government, how is that any different from what's going on in the election fallout?

Weak, cowardly judges have yet to permit the mountains of evidence — so high now that it constitutes proof — to be examined in court.

State legislatures refuse to exercise their constitutional duty to reclaim their authority and reverse the scam of certifying a fraudulent election in their respective states, and votes for a slate of electors that pretends all is good.

Likewise on Capitol Hill, while there are some murmurings here or there of bringing this all to a head on Jan. 6 at the joint session where the electoral college votes are officially counted, there is yet to materialize an actual declared challenge and the movement to support it.

And who is damaged by this cowardice, this lack of willingness to do one's duty? The innocent, as usual.

The bishops and the establishment GOP, as well as judges all over the country, are little else than self-interested weaklings who are too afraid to do the right thing. And the reason they are afraid is because they know they may have to pay a personal cost — from being busted down by Pope Francis and his Marxist Vatican, to having Antifa show up at their posh house in the wealthy suburb they live in, to being excoriated by the Marxist media.

Whatever the reason, none of them excuse their cowardice and self-interest.

The reason leaders enjoy the so-called "privilege of power" is so that they can exercise it in defense of the little man, the innocent, whether it's in the Church or the nation. Yet most of these cowards are so well insulated from their own selfish actions that they never feel the consequences of them.

Take for example the shrinking Church. As chancery staff are laid off and parishes closed and all that, do you seriously think the bishop is impacted, personally? He doesn't lose his health insurance, his cleaning ladies, his secretary, his food, his car, his house. In fact, from his personal standpoint, not a thing has changed.

That's one reason they never do anything about anything. They never feel the pain or suffer the consequences of going along with the evil. At least not in this life.

Continuing the parallel with the establishment GOP. The same thing is true. They likewise never feel the pain of their cowardice. They keep their incomes (even vote themselves raises) health insurance, cars, homes, food, you name it.

Weak leaders always insulate and protect themselves, never getting the dirt and scars of battle on them.

The hierarchy of the Church has already gone to Hell. Somehow, Our Lord will correct that situation because ultimately the Church belongs to Him, not them.

How He will do it is certainly a mystery right now, but He will do it because He promised "the gates of Hell shall not prevail" and "I will dwell with you all days, even unto the consummation of the world."

But shifting over to the GOP establishment, established in their cowardice and greed, no such promise exists, which of course extends to the entire nation.

God has invested Himself personally in no earthly power. If they follow His will, they will endure. When they cease, they will be destroyed. It's just that simple.

But for the moment, bishops and the GOP establishment are like two peas in a pod, indistinguishable except for the miters.

Cowards, the lot of them: judges, senators, congressmen, bishops. They might as well be called cheats, liars, murderers and thieves.

All their weaponry — and it is considerable — will be turned directly against the innocent, truth-loving Americans who only want justice in this election.

It is the innocent who will pay first for the crimes of these men — the people they will not protect, as they are sworn to do.

Tens of millions of Americans know this election was stolen. If the Marxists get full control, they will have to set about destroying those Americans. They can't allow them to agitate for four years like they did for Trump's first term.

All their weaponry — and it is considerable — will be turned directly against the innocent, truth-loving Americans who only want justice in this election because all future elections are now in jeopardy.

Likewise, all innocent, truth-loving Catholics also only want justice now in the Church — the true faith being preached — because the future of the Church in America is in serious jeopardy.

And one last striking parallel is the purge. If you don't think a purge of the innocent is coming if the Marxists get control in D.C., then you're high. Do you really think the cowards who let them seize power will then set up and fight for the innocent? Get real.

But there is a comparison, again, in the Church. The wicked Marxist-bishop gang has seized control — again thanks to the cowards — and they have initiated their purge.

Ask any faithful priest who dares to open his mouth and preach the truth — ask him what happens if you don't toe the party line.

There's a reason St. John puts cowards at the top of his list when talking about the order of the damned.

It is the cowardly establishment that has brought both Church and country to ruin. They truly are two peas in a pod. 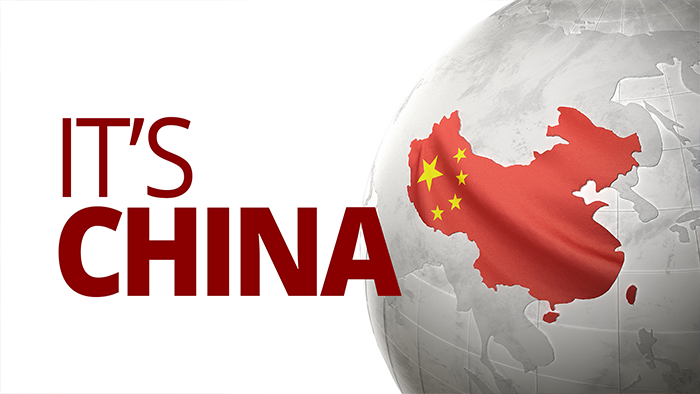 It’s China
Biden is their man.