Ushering in the new world order.

The interview we are presenting in today's Vortex is perhaps one of the most important we have ever conducted. We have included some sound bites in this episode to give you a flavor of it, but we strongly recommend that you view the whole interview.

When Our Lady appeared in Fatima in 1917, it was specifically to tell the world to repent and to warn of the coming scourge of communism (meaning Marxism). Marxism is the decided enemy of the Church, of Christ, because it replaces the supernatural with natural; it makes the State God.

Our interview is with Joseph Flynn — the brother of Gen. Michael Flynn and who heads up his legal defense fund. In our interview, he drops the bombshell that documents released as part of the ongoing Department of Justice ("DOJ") investigation reveal that not only Obama but Joe Biden was a major player in the attempt to destroy Donald Trump even before the inauguration.

The chosen route was to conjure up charges against Gen. Michael Flynn — who had become aware of the fact that Obama had reworked America's national intelligence apparatus.

This all started coming out a week ago when a document known as a "302" was released, showing the beginnings of what has been termed a "permanent coup" and that it was orchestrated from within the Obama White House — and Joe Biden was in on the whole thing.

The globalists in the Church were already in place from early on in Francis' papacy.

If you're wondering why you are hearing this on Church Militant and not CNN or MSNBC or even Fox News — except for the slightest little blurb — well, the answer should be obvious.

Why should all of this matter specifically to Catholics (aside from the fact that the Flynn family is faithful practicing Catholics)? Because the same dynamic creating a coup in Washington, D.C. is the exact same dynamic that is in high gear in Rome.

That analysis of what's going on in Rome has been substantiated by considerable evidence and commentary over the past half-dozen years. It also explains why Pope Francis refused to meet with U.S. Secretary of State Mike Pompeo, as well as Hong Kong's Cdl. Zen — both of whom have been very public calling on Rome and the pope to condemn this march to worldwide Marxism.

Church Militant has been sounding this alarm for two years now, alerting the world to the union of Rome and the Washington, D.C. swamp to effectively oust Trump so that a new world order can be ushered in. Remember, the globalists never thought Trump was going to win in 2016.

America is the last piece on the board that needs to be taken off.

The final push was supposed to happen from a Hillary Clinton White House. The globalists in the Church were already in place from early on in Francis' papacy. They were to team up with a Hillary administration and carry the ball over the goal line.

That obviously did not happen. That's why there's been an unleashing of such evil against Trump by the Left: He ruined their plans, set them back four years — hopefully longer. America is the last piece on the board that needs to be taken off. One month to go.

Please watch the interview in its entirety — so you can inform as many people as you possibly can. 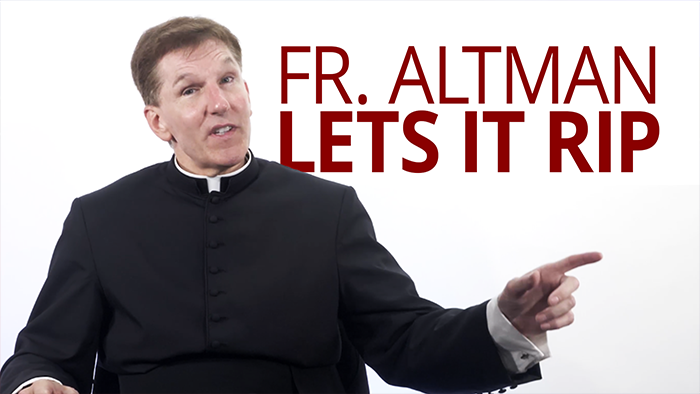