Pope Francis must act now and seize control of this disaster unfolding with the U.S. bishops and his own inner circle as well. Since the early days of his papacy, the homosexual collective has metastasized around him and has seized operational control of the Church.

His entire papacy is now threatening to be completely swamped in a torrent of sodomy and sodomy-supporting bishops and cardinals who have been operating behind the scenes for decades. A number of the cardinals in his inner circle are intimately associated with this whole sordid McCarrick affair — perhaps not directly associated with the crime, but leading henchmen in the cover-up.

And as they say, the cover-up is worse than the crime. It's one thing to strip McCarrick of being a cardinal, but much more than that has to happen — this goes way beyond just one man. The other cardinals, who are issuing denials left and right that they knew anything so they can save their own red hats, they need to be stripped of being cardinals as well.

And the whole lot, McCarrick and Sodomy Inc., all need to be dismissed from the clerical state, entirely. Even now, in the face of an ever-widening scandal, many of them are unbelievably doubling down and insisting they knew nothing. Either they are the most naive, stupid, uninformed men who have ever walked the planet or they are consummate liars.

How could they not know? All over the internet and in a boatload of emails that just Church Militant has received, hundreds of regular priests and seminarians are saying they knew all this about McCarrick back in the 1980s. It is unfathomable that the likes of Donald Wuerl, Sean O'Malley, Kevin Farrell and the rest of the cardinals in the United States knew nothing — they knew.

For example, the case of extremely close papal confidante Cdl. Sean O'Malley, O'Malley was sent a letter from a priest in June of 2015, who told the story of sexual abuses by Cdl. McCarrick. O'Malley has admitted that his staff received the letter. Three months after the letter arrived in Boston, O'Malley took McCarrick on a trip to Havana, Cuba — one of many. O'Malley, in fact, posted all this about the trip on his own personal blog, again, three months after knowing that McCarrick was being accused by a priest of sexual abuses and harassment.

Not only that, but knowing that at least one priest has spilled the beans on McCarrick, O'Malley still shared a stage with him and gave a dual presentation while in Cuba. Now O'Malley was the first of the U.S. cardinal to come out, in a very carefully legally crafted letter, implying that he didn't know anything, but very careful to actually avoid saying directly that he didn't know anything.

In fact, a number of cardinals in the U.S. knew a lot, going back decades. In one case, a New Jersey native by the name of Mark Crawford is now publicly coming forward that he personally told McCarrick about the sexual abuse he and his brother suffered at the hands of one of McCarrick's priests in Newark.

McCarrick pressed him to not tell anyone and promised that the priest would be dealt with. Of course, nothing happened to the priest. Crawford became incensed at the betrayal and wrote to every U.S. cardinal at the time — a number of whom answered him back.

Those men were Cdls. Law, Mahoney, Cook, Stafford as well as the Vatican, so, as Crawford puts it so aptly, they knew. How plausible is it to believe that, for decades, various high ranking churchmen — cardinals — knew from various victims that McCarrick was a predatory, conniving pederast covering up for homosexual abusers and that today's crop of cardinals are "shocked" at the news?

Since launching #CatholicMeToo, Church Militant has been inundated with emails from various priests and former priests and former seminarians as far back as 1986 saying they knew. They all knew — lowly seminarians, faculty members at various seminaries spoke quietly, but openly about all this — everybody knew.

And that's why all the pictures of cardinals like Dolan and Cupich glad-handing and posing and all chummy with McCarrick are so infuriating to faithful Catholics. Men like this who have spent their entire ecclesiastical careers destroying the Faith of tens of millions are unwilling to come clean and face their judgments for all they have done.

Good Lord, at least Judas had the common decency to feel remorse — he didn't repent and was damned as a result, but at least he felt remorse. As various notable commentators have said over the past week, these men actually believe that all this homosexuality is a good, an honest to God good that people so afflicted should celebrate and feel proud about. They let priests and parishes march in lewd gay pride parades, hold gay Masses — the longest continual one being right here in the archdiocese of Detroit with the blessing of Abp. Allen Vigneron.

There are gay so-called ministries that minister nothing of the Faith to gays — just the opposite, in fact. Priests feel completely free to simply come out and admit their deviancy to Sunday morning congregations who stand up and applaud them and whose bishops support, like Milwaukee Abp. Jerome Listecki did earlier this year. Those bishops and archbishops are taking their cues from the senior leadership that has been complicit in all this evil for decades, stretching back to Cdl. Francis Spellman of New York and Cdl. Joseph Bernardin of Chicago.

It will never be possible for any of these senior churchmen in the U.S. and their accomplices like Fr. James Martin, Fr. Thomas Rosica and the rest of Sodomy Inc. to function and be believed again. These lower level men, the foot soldiers, have the full endorsement of the sodomy-promoting and covering-up cardinals like Joseph Tobin of Newark and Blase Cupich of Chicago, who have embraced Fr. Martin's pro-gay agenda disguised as mercy.

When Martin or Rosica, who is always speaking to seminarians and twisting their thoughts, when these two and others roll into town with their gay parade in tow, do they not think there are any victims of clerical sexual predation who feel victimized all over again by all this actual now out in the open clerical support and promotion for this sin.

So what is the leadership of the American Church? Tone deaf? Ignorant? Stupid?

That question can certainly be asked of Cdl. Timothy Dolan, who last week, right in the middle of the largest crisis to ever crash into the Church in America, had the unmitigated gall to send out a notice to Catholics in New York — get this — asking for more money to renew the Church — $200,000,000! Unbelievable, maybe they really are that stupid, and that would be a kind way to put it.

The cardinals in the Church in the U.S. — across the board — have lost their moral authority to ever open their mouths again, about anything, except to announce their resignations. Even the few statements they did release don't talk about the evil among them, but rather the need to produce new procedures and policies and protocols.

We don't need new policies, we need new prelates. And if they don't have the integrity to resign, then Pope Francis needs to remove them. There has never been a more critical moment in the life of the Church in the U.S. The senior leadership has presented its defense of lies and further cover-up and distortions. It's always the same way with these men: cheat, deceive, cover for one another, get away with murder, rape, sexual harassment, blackmail, assault — until you're caught red-handed, then form a committee and study the problem and produce a new policy — no! It's the policy makers that need to go.

The policy that needs to be implemented is simple: no gay men in seminaries, and men who are currently leaders and who are gay be dismissed — there, problem solved. Pope Francis, your entire papacy is on the verge of being derailed all, over the world in fact — in Chile, Honduras, the United States.

The ball is in your court. Act now and get rid of these men for good, or go down in history as the Pope who allowed Sodomy Inc. to overrun the Church. Get rid of them and end this now or — like all of us — you will answer to Jesus Christ, whose Vicar you are — unlike all of us. 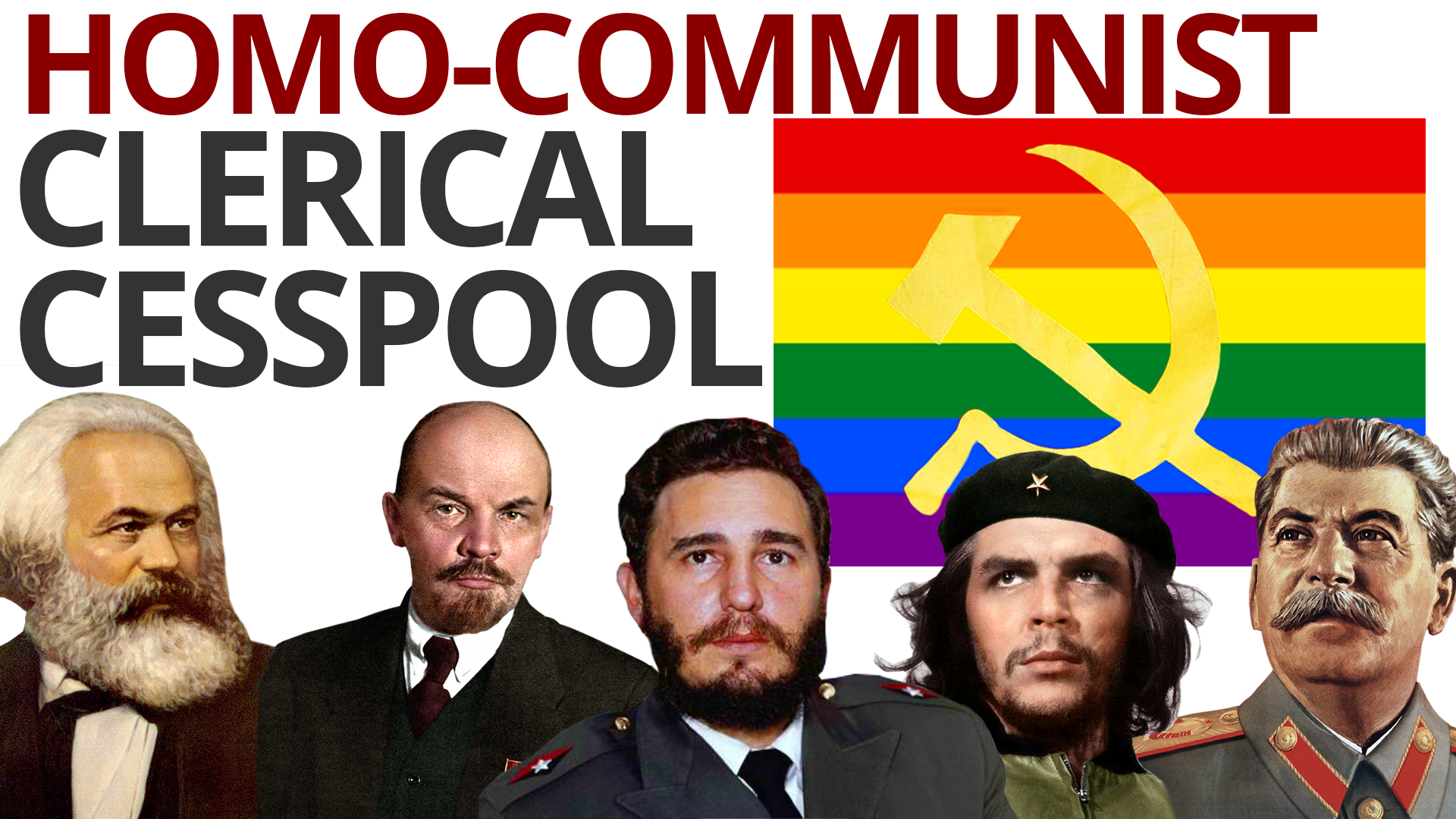 Homo-Communist Clerical Cesspool
That's exactly what it is.