Because it's getting real.

We haven't officially measured it, but it's probably a safe bet that there's a couple hundred yards or more of wires and cables and cords and strings and ropes; they are all over the place. We also beefed up the security of the website to a tremendous degree, as well as the technical specs and operation of our internal communications systems.

Church Militant is, in short, poised to become the most sophisticated media operation in the Catholic world.

No one in the Catholic world does media like Church Militant does.

And while this new studio space is all cool and exciting and so forth, the reason for it is not. There is a cultural and theological war taking place, and without overstating it, it is a fight for the moral survival of the race. This coming year on the political front — the U.S. presidential elections will be a bloodbath, as the extremely unlikely champion (mostly) of God and country battles forces hellbent on a redefinition of humanity.

We have built this Catholic media center to be the heartbeat of authentic Catholicism, which must, as its very charter, fight against this darkness. Our Blessed Lord did not establish His Church — and yes, it is His— to go along with the world, but to convert it and to bring it salvation.

But there are forces, dark forces, as we have well documented, at work in the Church to pervert Her divine mandate. They've been in place for centuries, but they reached a critical mass this last half-century, and now is the time to go on the offensive against them. That is the entire reason for this newly revamped facility — to go to war with these demons who make use of human agents to bring ruination to mankind.

Some of these forces within the Church enjoy much celebrity and command large followings. They are false prophets and must be denounced. Whether destruction of the Church is a conscious motivation of theirs or they are just useful idiots in Hell's plan no longer matters. The destruction they bring about through malice or cowardice must be confronted and defeated. They are present in every aspect of the Church and the life of the Church — in the hierarchy, the universities, the chanceries, parishes and so forth.

And if you think this sounds all crazy, then you don't have a sufficient enough understanding of the activity of the diabolical.

If you believe in God, specifically the Holy Trinity, you therefore must believe that Lucifer refused to serve and fell from the celestial realms forever, driven out by St. Michael and his legions. Satan now unleashed his fury on the only beings he can — us. And his mission, what consumes him, is to deny to humanity what is everlastingly denied to him.

For this reason, the Eternal Logos incarnated saves us from a fate we would otherwise be powerless to fight off. He established a Church, one Church, His own mystical body on earth as a refuge, a means, the means, to salvation — the only means.

So, of course, Satan would wage war against the Church — it is the path of escape from him — and he seeks to destroy it. Think of the Church as a tunnel out of a slave labor camp, the only escape, and the commandant of the camp knows about the tunnel. He will do anything in his power to shut off that escape route.

Of course, God is more powerful than Satan so he will never defeat the Church as She is in Herself. But he can still destroy individuals. The Church will always be with us as Christ has promised. It will never be defeated.

So Satan does everything he can to weaken the Church, leaving no stone unturned. That includes, even in a special way because of its power to influence, the media. It's why we chose this arena to stand and fight.

No one in the Catholic world does media like Church Militant does.

We begin and end every day with prayer, including the Rosary, because no baptized Catholic can be Catholic without prayer. It is the very first weapon we have because it is supernatural. We combat directly the errors so common and profound throughout the Church, especially in the realm of so-called Catholic media.

These include liberal reporters like John Allen of Crux, Christopher Lamb of The Tablet, Austen Ivereigh and loads of others. It also includes the even more dangerous spiritual terrorists like James Martin, Bishops John Stowe and Robert McElroy, and the really poisonous characters like Cdls. Blase Cupich, Joseph Tobin and Donald Wuerl. These men and their evil pronouncements and agendas are supported by, and advertised for, by untrustworthy and deceptive outfits and so-called journalists like the ones we named, and more.

They are all allied against the Church, attempting to present a different picture of Her true mission handed to Her by Christ Himself while He was personally present here on earth: the salvation of souls. They don't believe that and have therefore disqualified themselves from being considered reliable. They are not.

The entire culture is at a crisis point precipitated by the crisis in the Church.

A hundred years ago, Communism understood that to create a world without God, where the state would become God, the Catholic Church would have to be destroyed. But where centuries of other attempts to destroy the Catholic Church had failed, Marxism decided to quietly invade and pervert from within.

The whole reason for this extremely cool, all newly equipped and updated facility is to take the war to Satan and his deceptions.

When Our Lord said the gates of Hell would not prevail, that presents a picture of the Church attacking, not crouching down, hiding and cowering in some defensive posture.We have the Queen of Heaven, St. Michael, the truth of God Himself, all present in the Holy Catholic Church. It's time for war.

It's time for war.

Before we wrap up, we'd like to continue to express our gratitude to all of you who have donated to this cause and continue to donate.

We still have bills that are outstanding, and whatever you can keep giving to help is very much appreciated.

Thank you for the incredible amount of trust you have placed in us. This is your apostolate. We run it day-to-day, but this is the work of the Church, and we want to thank you for allowing us to not just continue the fight but to step it up. 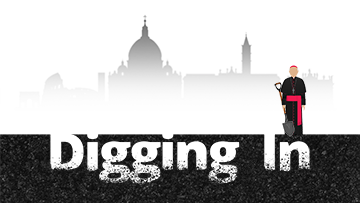 Digging In
And they are going nowhere.