Over the weekend, in a move many see as a warm-up to be his successor, Pope Francis tapped Philippine Cdl. Luis Tagle to become the new prefect for the Congregation for the Evangelization of Peoples.

And for the record, the cardinal prefers to be called by his nickname, Chito, rather than by the title of his office. He's even been dubbed the "Asian Francis." He has criticized the Church for using what he says are "harsh words" when talking about homosexuality or divorced and civilly remarried Catholics, whom he has said should be able to receive Holy Communion in some circumstances.

Tagle shares the Pope Francis vision of a synodal Church, which means, in practice, a breaking down of the universality of the Church into what are essentially smaller regional or national churches. In the synodal paradigm, the teachings of the Church, while not necessarily being out-and-out denied, get short shrift and put on the shelf, in the name of needing to "accommodate" local customs and so forth.

"Synodal" is code for what homosexualist Cdl. Blase Cupich has spoken publicly — about there being a "paradigm shift" in the Church, which means, a moving away, more like a turning your back on the traditional understanding of Church teaching, especially in the area of sexual morality and the embrace of an out-and-out modernist stance.

What we are seeing is the fulfillment of what Pope St. Pius X warned about in 1907 — an invasion of modernism, which he defined as "the synthesis of all heresies."

Tagle's relative youth (just 62) and Francis' advancing age (he'll be 83 next week) could be the combination to cement the Francis revolution in place for a hundred years or longer.

Tagle was the very last cardinal created by Pope Benedict, just weeks before he resigned, and knew he was resigning.

Pope Francis' elevation of Cdl. Tagle to such a high-profile position is a cause for concern. Tagle is cut in the Francis mold, but is a lot more friendly and smiling. He is a natural-born PR man, as seen in this Church-produced video of the 2018 Youth Synod.

While the spectacle is devoid of all grace for his office, unsuspecting, poorly catechized youth, like those who were specially selected for the Youth Synod, can easily fall prey to a man like this.

While he comes off as square, he also wins accolades from fellow Churchmen for trying to be with the people, accompanying them. In fact, around Rome, all one hears about Tagle is how he's full of "joy" and concern for the youth.

But he didn't express much concern for the youth in at least one case during his time as the president of Caritas Internationalis, a worldwide confederation of the Church's charitable work.

The second-in-command at Caritas last month told the Los Angeles Times that he had informed Tagle of a situation involving a Salesian priest from Belgium who had been convicted in 2012 of child sex abuse and child pornography. The priest had somehow gotten into an African diocese and risen to a prominent role in Caritas in the diocese, apparently abusing at least two more children in that role.

Warning signs were going off two years ago, but Tagle did little to intervene and ensure the priest was gone, leaving it to others to handle, and not following up when he was told everything was settled.

All of Francis' men, it seems, get elevated in the Church despite being stained with the taint of sex abuse — with minors or adults — either actively doing it, covering it up or not paying much attention to it when it comes across their desk.

Tagle appears to fit the mold perfectly, and yet, here he is, nestling in Rome, where he will no doubt be exposed to many, many other cardinals who will be electing Francis' successor.

Tagle already has converted many to his camp, being elected to multiple synod governing bodies the last few years.

At the 2014 synod — on the heels of the extremely controversial midterm relatio document that appeared to give some tacit approval to homosexual unions — Tagle took the opportunity to gloss over the sin and evil of that proposition by laughing to the international media in the Vatican press office, laughing and saying, "he drama continues."

Coming up on seven years, this pontificate has had the effect of institutionalizing a decidedly mainline protestant approach to all areas of sexual morality, giving cover for abusers and cover-up bishops when they are closely connected to Francis, and throwing the nearly full weight of the Church behind the marxist-socialist agenda rising around the globe.

With more than half of the cardinal electors now having been appointed by Pope Francis, it's become clear that the battle for the soul of the Church is going to be one long, drawn-out affair that generations of Catholics will see play out for many decades, perhaps even centuries, unless a divine intervention occurs.

Absent a direct action from Heaven, this is going to be long, bloody and costly. It is no time to shrink from battle. It's time to man up, oppose all the error you find among so many Catholics, clergy and laity alike. 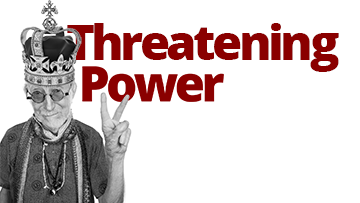 Threatening Power
Keep it up.