May 28, 2019  0
Podcast Available for Premium Subscribers

Last week, the lying Cardinal Donald Wuerl's man was installed as his successor as the newest archbishop of Washington, D.C. — former archbishop of Atlanta Wilton Gregory.

The installation presented the occasion for a host of lying, cheating homosexualists in the hierarchy to get all dressed up in their red and show off. In fact, look at this picture and see how many homosexual men you can find looking pretty in red.

At the front of the line is Cardinal Edwin O'Brien, a man singled out last year by Archbishop Viganò as part of the homosexual current in the Church.

Next is Cardinal Joseph Tobin of Newark, New Jersey — former haunt of homopredator McCarrick. Tobin holds what he calls "pilgrimages" for active homosexuals in his archdiocese.

He also actively supports the everything-but-self-admitted homosexual Jesuit James Martin, as does the next pretty-in-red deceiver of the faithful, Chicago's Blase Cupich, who it seems never met an open homosexual he hasn't cheered — especially priests.

Since Boston's Cardinal O'Malley decided to wear his religious habit and not the red ensemble, we'll skip him.

Then there's Cardinal Justin Rigali who it seems is the only one wearing red in the photo who was not deeply embroiled in the homosexual hierarchy scandal.

But right behind him is the notorious Roger Mahony of Los Angeles, a man who orchestrated the cover-up and, get this, shipping out of the country of multiple homopredator priests.

Mahony should be behind bars. His filth as archbishop of Los Angeles cost the Church nearly a billion dollars — yeah, billion with a "B."

He oversaw the shattering of countless young males and still has the audacity to show up at events like this.

Of course, the man who invited him is none other than Wuerl, the last in the line in the photo and who is flashing that weird satanic looking hand gesture, something he does frequently.

You will recall that Wuerl lied, as Archbishop Viganò said in fact "through his teeth" about not knowing about McCarrick's evil. Then, when he got caught in the lie by secular media, his excuse was the reporter asked if knew about McCarrick and minors.

A former seminarian, an adult, had come forward in 2004 telling Wuerl about McCarrick — so yeah, he knew. He just hid behind the precise wording of the question about minors.

But this is how this unseemly wicked crowd behaves — as a routine. They lie like the devil himself and twist and distort like nobody's business. The Renaissance popes would hide their faces in shame as this cast of corrupt cardinals passed by.

By the way, we would include the new archbishop himself in this gay cardinal parade, but he's not yet a cardinal.

The noted researcher into all this horror, Richard Sipe, who died recently, publicly accused Wilton Gregory of being homosexual. Little came in way of denial.

But this picture speaks volumes. It says, in short, pardon the expression, screw you, laity. I'm Donald Wuerl — known liar, cheat and cover-up artist, and I still run the show. And I'm going to send a message that my fellow homosexual and/or cover-up cardinals are still in charge.

We'll persecute whatever clergy we want. We'll crush whatever reform efforts are undertaken. We'll sponge off you until the day we die.

See my guy from Newark up there in front of me, Tobin? He had an Italian model living in his rectory pretending to be a foreign language student at Seton Hall, and he got away with it.

And Blase, one of my other guys? Yep, he deftly orchestrated a complete cover-up at the sex summit in February after he and I flew back and forth to Rome multiple times beforehand planning the strategy — worked like a charm too.

And O'Brien leading the way — Viganò called him out as well, directly naming him as a homosexual and being in one the McCarrick over up just like I was. I thought it'd be good if I put him right in front and stick it to all of you.

And why can I do this, because over the years, I and Uncle Ted and Bernardin and Blasey Boy and all the rest of us have managed to put cowards and wimps and gays into the office of bishop all over the country, so we know they won't say a word.

We kept good guys out, and those who slipped through, we drove off.

We even like that Barron fellow because he says that after us covering up generations of rapes of teenage boys, suicides, active gay priests with other priest and bishops as bed partners — you name it — after our entire episcopal careers built on all this filth, that we are going to Heaven, because we have a reasonable hope that all men are saved.

Man, it's great to be a cardinal. So see ya; got to head back to my $12 million pad on Embassy Row.

Yeah, come to think of it, Wuerl's right. This isn't a massive, massive crisis. 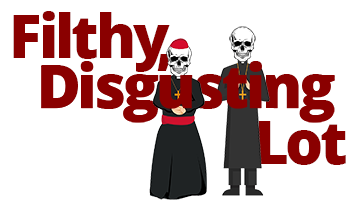 Filthy, Disgusting Lot
And their eternal destiny will be unquenchable fire if they do not repent — those who still can.