Reporting from the Texas State Capitol.

This special edition is reporting from Austin, Texas, the state capitol, on the eve of the mid-term primaries where the Catholic bishops have gotten themselves into quite a controversy that is now going to threaten the tax exempt status of every diocese in the state and potentially the whole country. More on that most important point after a little background.

There is a great polarization going on, not just in America in general, but within each of the political parties. Liberals want the Democratic party to be even more liberal as evidenced by liberal matriarch Sen. Dianne Feinstein of California, the oldest serving U.S. senator, not even getting her party's support last week because she isn't liberal enough. Within the Republican party, the same thing is happening. Solid conservatives are fed up with the pussy-footing of what they call RINOs, Republican in Name Only, who vote more moderate on causes near and dear to conservatives, largely social issues like abortion.

Here in Texas, the RINO Establishment has held power for a long time, and this establishment has been largely backed by the Catholic bishops of the state, casting their votes in ways generally approved of by the bishops and their agenda, particularly in regards to illegal immigration issues. Texas is of course greatly impacted by the question of illegals since it shares the longest border of any state with Mexico where most illegals come from.

For many years, the establishment RINOs have voted in a somewhat guarded measure on issues of abortion and end of life concerns, causing Texas to experience a continued slow drop in pro-life status compared to other states. Texas used to be counted as one of the leading pro-life states but has seen that status erode under the RINO influence. While voting "somewhat" pro-life, it hasn't been nearly enough for solid pro-life organizations like Texas Right To Life, which represents hundreds of thousands of Texas' true conservatives and is gaining considerable clout in voting booths. Yet even on some occasions, the so-called pro-life RINOs have actually cast their votes in favor of abortion, for example, when state lawmaker Byron Cook, trumpeted as being pro-life, actually took to the floor and argued in favor of allowing babies diagnosed with deformities to be aborted.

It is precisely this kind of pro-life doublespeak and weak-kneed approach to the life issues that Texas Right to Life and its massive following in Texas want to bring to an end. So the group has become majorly aggressive in seeking to replace the establishment RINOs — the same RINOs who have the backing and support of the Texas Bishops' Conference — and this dynamic has put Texas Right to Life and the bishops on a collision course.

Last week, in what many are viewing as an attempt to directly influence the outcome of tomorrow's midterm elections, the bishops issued an unheard-of, unprecedented rebuke of Texas Right to Life, essentially claiming teaching authority over the group in matters political. The statement consisted of three major points, but the most troublesome point is the third point where they publicly decry the Texas Right To Life Voter Guide, which supports the young and upcoming anti-Establishment Republican candidates primed to upset the old-time GOP Establishment politicians favored by the bishops.

And here is where the bishops may have actually have run afoul of IRS regulations forbidding Church involvement in politics, a rule known as the Johnson Rule, which actually originated under the administration of Texan President Lyndon B. Johnson back in the 1960s. To have injected themselves into statewide political races just a week before the elections and essentially condemned a political activist group by name, a group that publicly backs certain candidates over others, crosses the line and puts the bishops' conference in a position where it could thereby lose its tax-exempt status.

Church Militant has learned exclusively that plans are being drawn up and formulated to file a petition with the IRS to have the tax-exempt status of the Church in Texas completely stripped. It that were to happen, the dollar cost to the dioceses of Texas would run into the hundreds of millions of dollars and bankrupt many dioceses. Additionally, experts observe that since the head of the Texas Catholic Conference, Galveston-Houston Cdl. Daniel DiNardo, is also president of the U.S. bishops' national conference, this could actually extend beyond Texas and impact the tax-exempt status of the entire Church across the country.

If that scenario were to play out which observers tell Church Militant is certainly a possibility, the Church across America would become financially insolvent as the 194 dioceses across the country would have to scramble to sell tens of billions of dollars of assets to pay the exorbitant tax bill that would surely come their way in the absence of their tax-exempt status — billions and billions of dollars presently and moving forward that the federal government would dearly love to get its hands on.

How did this happen? How is it that the bishops of Texas would collectively sign on to an agreement that could potentially bankrupt the Church in the United States? The answer, insiders say, lies with one woman, Jennifer Carr Allmon, the executive director of the Texas Bishops' Conference, the first woman to ever hold that position.

A little background is in order here. The most vocal bishop in support of the attacks against Texas Right to Life has been Fort Worth Bp. Michael Olson who launched a blistering accusatory social media campaign on his Twitter feed, actually telling parishioners to let him know if his orders to his diocesan priests to read the statement of condemnation out loud at Masses from the pulpit were being followed. Olson is the same bishop who ordered Catholic pro-life groups in his diocese not to protest in front of abortion chambers with banners of Our Lady of Guadalupe because the image of Our Lady was offensive to Protestants who might also be protesting.

The behind the scenes of this is that very wealthy supporters of the Church in Fort Worth, who also support the status-quo RINOs, became very concerned that the young Republicans backed by Texas Right to Life were close to capturing the state legislature, according to internal polls. So they reached out to Olson and Jennifer Carr Allmon and said something needed to be done and done quickly before the elections.

One such establishment figure in the Texas legislature the rich want to protect because he is seen as "their man" is Charlie Geren, who barely hung on to his seat in the last election, almost losing to a Texas Right to Life challenger Bo French. That same race is again coming down to the wire and a loss in that race for the GOP-RINO establishment would signal a massive defeat for the status quo, including the bishops who are wedded to that same status quo.

The bishops are interested in maintaining the current political environment because the up and comer Republicans backed by Texas Right to Life are not friendly to the cause of illegal immigration which is the cause fueling the engine of the bishops' political agenda in Texas. If the state of Texas suddenly turns anti-illegal immigration, the Texas bishops stand to lose a great deal, so they are willing to settle for weak pro-life support from RINOs in order to hold on to large sums of money going to what they see as the most important issue — illegal immigration.

If the up and comers score big tomorrow night, it will have devastating consequences for the bishops, so they have gone all in trying to trash those candidates, however indirectly, using a poorly thought-out, as well as, abysmally executed plan put together by Carr Allmon. But the upshot is, in trying to hold on to their favored position of money and influence in Texas, they may have inadvertently set in motion a series of events that could cost them their tax-exempt status and relegate them to political poverty.

Reports are that some of the Texas bishops are now backpedaling from the statement, some even privately denying any advance knowledge of it. Some of this backpedaling appeared to be the case in a Friday afternoon interview on EWTN where San Angelo Bp. Michael Sis downplayed the statement and offered that everyone just needs to find common ground and work together — a radical departure from the aggressive tone of the earlier condemnation.

That the entire tax-exempt status of the Church, certainly in Texas and possibly in the entire country, owing to the connection between both Cdl. Daniel DiNardo, could come down to a hastily compiled statement by one woman, Carr Allmon, in charge of the Texas Bishops' Conference and backed by one hot-tempered bishop wanting to do the bidding of some rich donors with political interests, it's simply mind-boggling. But given the current temperature of the culture with regard to Catholic matters, a financial tsunami could certainly be in the cards for the nation's bishops.

Insiders tell Church Militant the petition to have the tax-exempt status revoked by the IRS is underway and should be completed sometime after the election. Texas now looms as a kind of Alamo for the Church in the United States — a last-stand effort to align themselves with the power brokers and help them hold on to power for their own selfish reasons.

Tomorrow's election results and a future IRS ruling loom very large indeed for the social justice warriors who have had control in the Church for decades. In the ever-widening polarization of the culture, visible in the political division within the parties, the bishops may have just backed the wrong horse in siding with the old guard.

Stay tuned this week to Church Militant for more analysis and the results of these pivotal midterm elections. 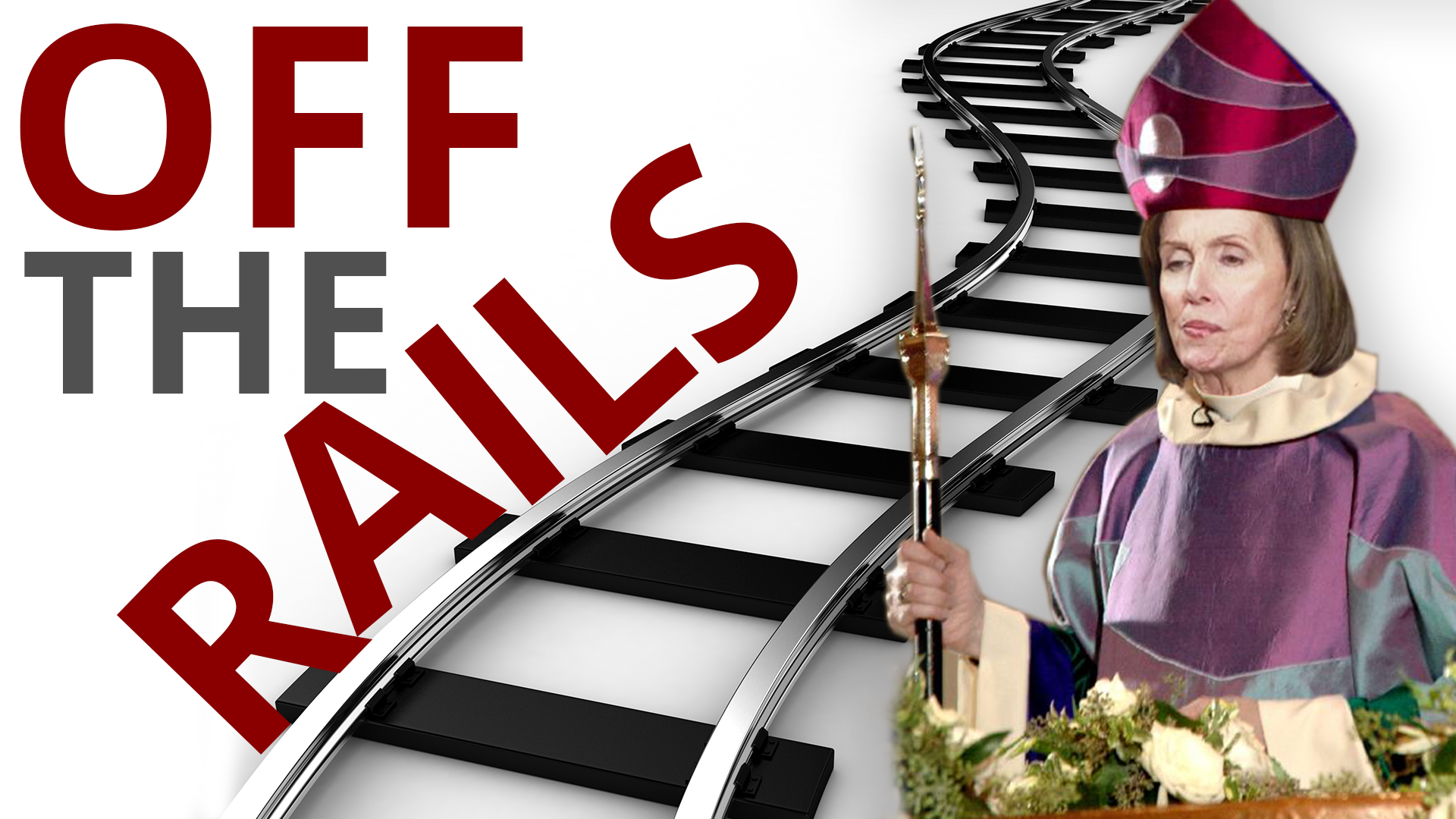 Off the Rails
And off the Catholic reservation.