It's in full swing.

With the highly controversial Amazon Synod almost here, the propaganda war from inside the Vatican is heating up.

The Vatican communications team has begun its official Twitter account for the synod — Synod.va — and is already beginning to pump out ample amounts of likes and links to suggest everything is great, ignore the alarmists, all is good.

And the way the propaganda is handled is a little different in the age of social media.

A person or entity doesn't have to actually produce the propaganda themselves. They can just "like" another posting, essentially making it their own.

James Martin, for example, does this all the time as he denies he's never actually, directly challenged Church teaching, all the while "liking" and "reposting" other people's messages who do.

So, taking a page from the homoheresy proponent's playbook, the Vatican communications team is doing the same thing.

And judging from what they are re-posting from other outfits, it appears one of the major objectives from inside the Vatican is to discredit any faithful Catholics who are criticizing the synod and its bowing to pantheism and syncretism.

For example, over the weekend, Synod.va liked an article originally from the "Catholic Lite" website Crux, written by Christopher White.

Crux was founded by John Allen, originally in concert with The Boston Globe, as an attempt to capitalize on Pope Francis news.

When that joint business venture failed, Allen was able to rescue the flailing entity by turning in part to the Knights of Columbus for grants and subsidies.

Allen is much better known for his long career at National Catholic Reporter, another rag full of dissenters attempting to dismantle the Church.

More than 50 years ago, the editors were told they could not call themselves Catholic by their local bishop. They, in essence, told him to drop dead and have remained as defiant ever since.

Allen prospered in that environment at National Catholic Reporter.

Allen is so Catholic Lite, predominantly liberal, that Bp. Robert "no one really goes to Hell" Barron actually brought Allen on board as a regular contributor to his self-promotion vehicle Word on Fire.

So, here we can immediately discern a joining of the forces: the Vatican, Crux, America magazine and Word on Fire.

But what's important isn't so much the actual sites; those are just placeholders for the actual human beings behind the websites. The people is what faithful Catholics need to focus on.

They are not the only ones involved, but they are the ones to draw first blood, so to speak.

In his article, White interviews an author of a book which Pope Francis called "a bomb" because it alleges that there is a powerful conspiracy to undermine the Francis papacy and that conspiracy is largely inspired by American Catholics.

Here is the precise quote from the article that the Vatican reposted and liked over the weekend: "The minority opposed to Francis in U.S. Catholicism has a large power: They have a lot of money and powerful media, they control part of the episcopate and, until Francis, were able to dictate the conduct at the Vatican."

Think about that for a moment. The Vatican, through its official synod Twitter account, is now not only endorsing, but actually making part of its official stand that faithful American Catholics are some powerful conglomerate in control of the Church and Francis has become the enemy of this group.

This is a propaganda war, plain and simple.

The first shots were fired by Francis himself, who has spoken disparagingly of both faithful Catholics as well as politically conservative Americans.

This posting from the Vatican over the weekend now makes it official, politically conservative, tradition-minded Catholics are the enemy, a powerful group in control of various parts of the Church.

Like most propaganda, there is almost no truth to this statement at all. Yet, it is more and more becoming the party line here from Rome.

This was the underlying point of a comment in a recent video of John Allen posted on Barron's Word on Fire site.

What sleeping and zombie Catholics need to understand is how all these dots are connected. Liberals, dissenters, active homosexuals, distorters of teaching, it is all of these that are a powerful force controlling the Church because they are the ones with access to the halls of power.

They have the buildings, the infrastructure, the offices, the authority and the command of the international media.

For example, Church Militant applied for press credentials for the synod, which were first granted in a limited form, and then suddenly denied, no reason given when we queried.

So who has the power here? But a denial of being allowed to stand in a room and ask embarrassing and revealing questions like we did in 2014 will not stop us or others from reporting on all this.

These men, not just the propagandists, but the men behind them are not so interested in obliterating the Church, as they are co-opting the Church and changing, redirecting it from its divine mission.

They want a Church of the world, a church of man, where the establishment of an earthly kingdom, a one-world government, is the goal.

That's what's at stake at this synod, engineered by the heretic hierarchy in Germany, supported by Pope Francis and pushed by the propaganda machine.

All this said, some more astute folks here in Rome have privately made the point that if folks like Church Militant are drawing the fire of the Francis papacy, then we are over the target.

Two thousand years after the Caesars of Rome ruled here, it is still the case in the world of earthly empires, all roads lead to Rome.

Coming to you from the Eternal City in advance of the opening of the synod. 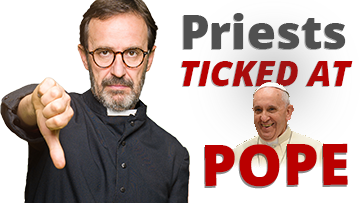 Priests Ticked at Pope
You can understand why.