May 2, 2019  0
Podcast Available for Premium Subscribers

I'm Michael Voris coming to you from Jerusalem, where we are beginning to wrap up our production trip for the Church Militant documentary on the Eucharist from the land where it all began.

One of the notable things about being in Israel is the nature of the friendly relations between Israel and the United States.

While many people believe that U.S. support of Israel is owing to a strong Jewish lobby in the United States, one thing many people don't realize is the prominent role American Protestantism plays in supporting Israel back home.

And notable, that support is based on a twisted reading of Sacred Scripture.

Before we continue, this is not some hit piece against American aid to Israel or U.S.-Israeli relations.

Those are all purely political issues that can be debated and gone over. What we're talking about in this Vortex is the motivation of U.S. Protestants in supporting the relationship.

In various Evangelical quarters in the United States, the belief in the need for a Jewish state is a bedrock belief that says, in short, the Bible says the Second Coming cannot happen until the Jews are gathered back into the promised land.

So that having occurred in the immediate years after World War II, it is now an imperative of the evangelical movement. Israel must remain Israel — period.

So this has switched from a political issue into a theological one.

In fact, this "Jews being brought back" theology goes even further back in history than U.S. history itself.

Before Luther, it was universally held that prophecies like Ezekiel's were allegories for the transformation of the biblical state of Israel, descended from the patriarchs, into the "spiritual Israel" represented by the Catholic Church.

A hundred years after Luther, Calvinist writers were declaring the hope and need for the Jews to reestablish Jerusalem and Israel to make way for the Second Coming.

That belief has now morphed into what's called Christian Zionism — the Christian hope, not to mention backing for, a new Israel, in which we are now standing.

But, as usual, when non-Catholic Christians read Scriptures, what comes next is usually disastrous, owing to ridiculous claims of personal interpretation.

These mistaken evangelicals have conflated the Israel of the Old Covenant or Old Testament — same thing — with the modern nation-state of Israel.

This country is highly secularized, allowing intermarriage, abortion, tolerance of homosexuality and all the rest of the cultural curses of the West. This modern-day Israel has nothing to do with the biblical Israel, including even the form of Judaism practiced.

When Titus and his 10th Legion descended on Jerusalem in the year 66 or 67 and laid siege to the holy city for three years, it not only destroyed the city of Jerusalem, it also wiped out Covenant Judaism.

Old Testament Judaism was eventually replaced with Rabbinic Judaism — a mere shadow, if that, of the former religion.

Rabbinic Judaism is essentially man-made, borrowing some elements from Pharisaic Judaism from the time of Our Lord but totally repudiating certain other aspects.

The Pharisees were one of a number of religious "parties," for lack of a better term, before the destruction of the temple. After that, they were the only ones who managed to survive.

Significant disputes arose among them when faced with the new reality of Judaism with no temple and therefore no temple sacrifices and no atonement.

How to handle this whole new world — which, to be very clear, was a shattering event for the Jews of the first century, an apocalyptic course changing reality — how to handle it was now the subject of much arguing.

After about 50 years or so, what emerged was the end of the Pharisees and the morphing of Judaism and Rabbinic Judaism, which had to face the challenge of how to not only interpret the various traditions — both oral and written — but how to live them out in the new reality.

Much of the old gave way to many new interpretations of the Torah, and down the ensuing centuries, Rabbinic Judaism has itself changed and splintered dramatically.

So Evangelicals and other denominations, mostly in the United States, have drawn a connection where no connection exists because of a severe misreading of Scripture. Additionally, they have converted that mistaken theology into a political force in the United States which mostly votes in a morally good way, but for bad reasons.

When someone's actions are morally right but their intentions are based on faulty assumptions, it doesn't end well. Eventually, the falsity of their foundations comes to light and their cause collapses.

Evangelicals in the United States need to vote for pro-life and pro-family causes solely because those positions in and of themselves are correct and not because the party who supports them also advocates a strong relationship with Israel.

Each year, the United States gives Israel about $4 billion. With anti-semitic Democrats gaining more and more influence in the United States, it won't be long before this bad foundation is exposed.

America's becoming less and less religious. If one of the main currents running through the Republican Party is revealed to be that we give billions in aid based on a belief that it will usher in the Second Coming, that may cause a political earthquake as Republicans could be painted as religious nut-jobs — which, for the record on this score, is true.

Vote correctly, yes. But also vote for the correct reason, a reason that is defensible and based on truth. 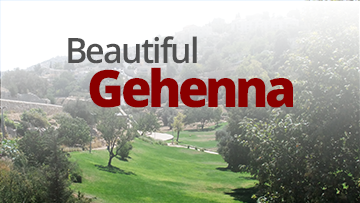 Beautiful Gehenna
Just below the surface — not so much.