Queer as a Bell

And they aren't done yet.

In case anyone needed any proof that the homosexualists within the Church see themselves as "on the march," all you need to do is read their own blogs and publications. Last week, we mentioned a posting in the little-read blog Daily Theology (DT), which had picked up on a New York Times piece maligning Church Militant for calling out Fr. James Martin's heresy. Well, in a response to that DT posting came another DT posting this week not only poorly thought out but also going through a virtual, top-20-type list of all things gay in the Church, in addition to, of course, bashing Church Militant.

The author of the blog, Jason Steidl — himself an out-and-proud gay Catholic (with a small "c") and, of course, studying queer theology at Fordham — drew the picture very clearly of all the inroads his gay culture has made in the Church. He points to all the following groups, naming them specifically: his gay mentors in the academy, the educational field "who have employed public theologies in books, articles, lectures, workshops and conferences to affirm LGBTQ people for decades" — notice, decades. Practically none of these professor-types have ever been condemned for their books, articles, lectures, etc. by bishops in the Church. That's why they have multiplied at a sickening rate — because they are rarely admonished.

He praises two condemned organizations, New Ways Ministry and Dignity, "which have been doing public theology and queer ministry for generations." New Ways was officially condemned by the Vatican years ago, and Dignity Masses still go on routinely in various parishes around the country. Again, no action at all on the part of bishops. Here in Detroit, the oldest ever Dignity Mass has been going on for over 40 years — a Mass which the archdiocesan communications director lied about for years until it was finally exposed. It takes place every Sunday right here in the archdiocese and never a peep from Abp. Allen Vigneron, who will not dare kick the hornet's nest of his gay-loving senior clergy, even as he drains hundreds of millions from the faithful presenting a facade of orthodoxy. He allows it to go on and on and on. And while it's true that it isn't on archdiocesan property, it is held at a Catholic campus, and he could put a stop to it if he really wanted to. But the point is, he doesn't want to. All this from the same archbishop pushing Alpha down every priests' throats in Detroit.

Steidl continues in his blog, saying, "I thought of an LGBTQ-affirming friend and pastor of a Catholic parish," thus admitting that a pastor and many, many, more are supportive of the homoheresy. Of his priest friend, as well as others, he says, "His public theology has communicated spiritual life and reconciliation to hundreds of queer people. He has challenged and changed the local Church in visible and radical ways." Well, that part is certainly true. This priest and hundreds of other homosexual priests and prelates have certainly changed the Church in radical ways. Then, he moves onto another group: "I thought of my married LGBTQ Catholic friends, whose [public] presence at a Catholic parish prophesies against systematic homophobia and institutional prejudice."

Sure enough, more than any other single religious group, it is Catholics who lead the way in accepting homosexuality as normal, which can't come as a surprise when you consider they have been exposed to swarms of gay men who are priests who have been slowly conditioning them for decades to accept sodomy and effeminate men. Catholics continue to lead all other religions in accepting same-sex marriage according to every poll. Exactly what institutional prejudice Steidl is rambling on about is a little unclear. Numbers approaching half the clergy are gay, expressing absolutely zero shame in the gay hookup culture, rife with promiscuity and anonymous sexual encounters, Steidl goes on further, "I thought of my queer friends who wonder out loud about sexual experiences in light of their Catholic faith."

Enough said in this area because being gay is synonymous with dozens if not hundreds of sexual partners. Yet, he expresses no remorse and actually pines for the Church to allow this. Of course, he can't leave out the conditioning of young minds with the incessant propaganda: "I thought of young queer people in CCD asking their religion teachers why the Catholic Church hates LGBTQ people." This statement is very telling on two scores. One, it pushes the insane notion that the Church hates gays — completely untrue and Steidl, who is studying theology, knows that. Second, if he thinks it's true, it just goes to prove how no one in the gay scene can contemplate their lives without sex. The very notion of being chaste is so antithetical to the gay world that no one on that scene can even contemplate it. Note to the queer nation that Steidl praises and applauds — loads of people in the world are chaste. You are called to nothing more or nothing less.

And finally, in perhaps the richest comment in his whole article, Steidl claims the mantle of "being called." "I thought of my own calling as a theologian." Steidl has no more calling to be a theologian than the man in the moon. He, like so many others in his circles, uses that self-delusion as means to self-justify their desire to pervert the Faith to justify their perverted sexual lives. And, yes, they are perverted. Just as queers, as Steidl uses the term so freely, have penetrated into the deepest recesses of the Church. They have not spared the halls of theology where they can work their evil. These men suffer from psychological illness — homosexuality — which the Church teaches is intrinsically disordered. Their big push now, like James Martin and others are always saying, is to purge that vocabulary from the catechism to further normalize sodomy.

Contained in Steidl's article is a picture which says everything about their queer theology. Take a look at it. If you think this isn't disgusting, blasphemous and sacrilegious, then you don't know your Catholic faith — queer theologian or not. Still, think there's nothing to worry about or resist in the Church these days? Still think all this talk about a gay revolution in the Church is nonsense? Remember, none of this could have advanced to this point without the express help and aid of thousands of psychologically disturbed homosexual men in the clergy and the episcopate.

Why the others will not fight back against this for the sake of the souls of the sheep will be a question they will have to answer for an accounting at their judgments. 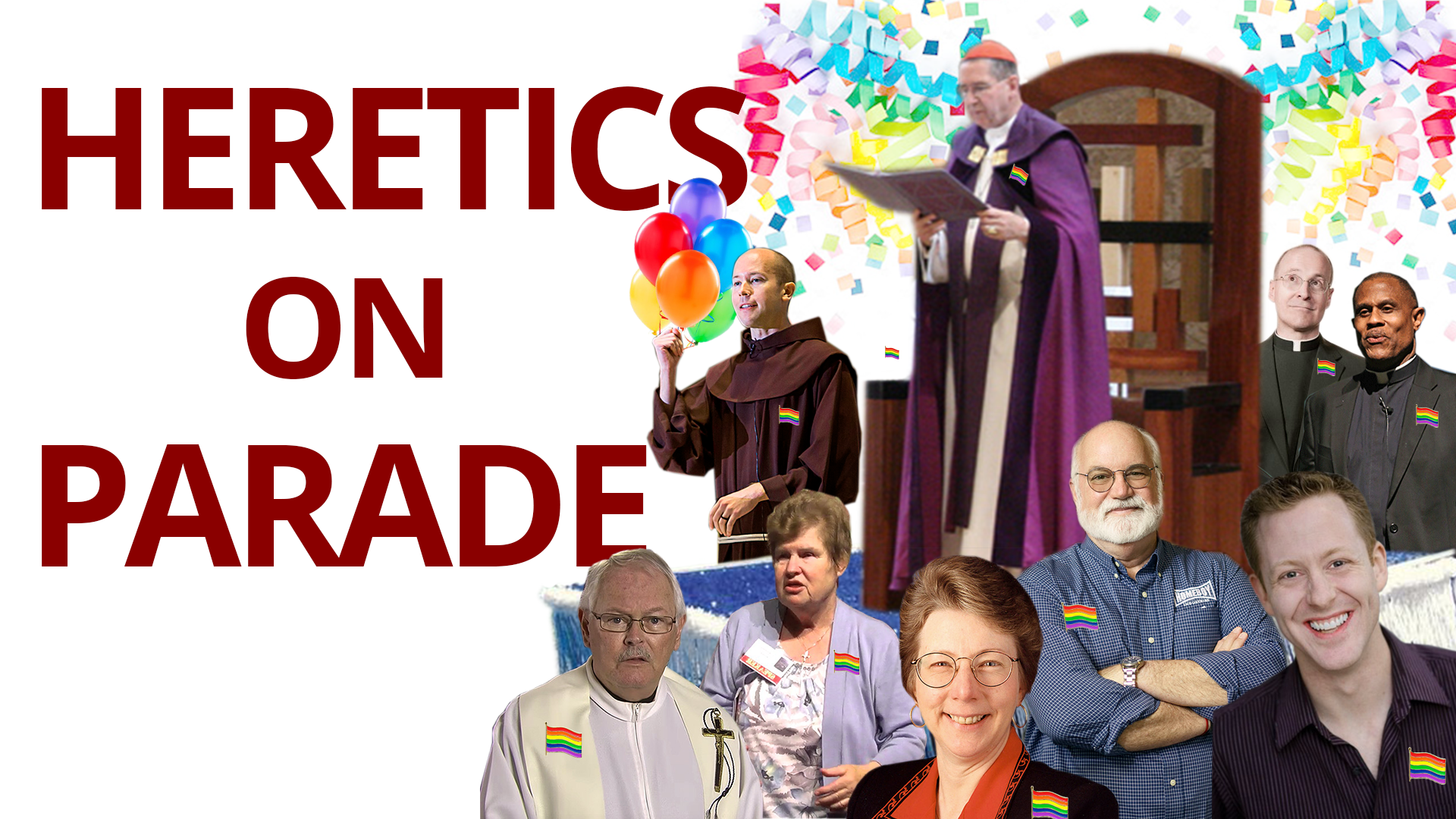 Heretics on Parade
It's a train REC.