Please remember to join us in our Church Militant 54-day Rosary Novena for the upcoming election. That's every weekday at 8 a.m. ET.

A very troublesome situation is developing within conservative Catholic circles: It's this stupidity of constantly presenting petitions for you to sign.

Understand: Petitions accomplish absolutely nothing. Well, they do bolster the email list of the outfit asking you to sign them. They'll use that list later to send you donation requests.

But as far as anything else, they are absolutely worthless. You end up on an email donation list, and the person the petition is about completely ignores it. For example, let's say the Marxist Left gang sent around a petition to their whole gang saying, "Sign this to get Michael Voris to stop talking about homosexuality in the Catholic clergy."

Let's go even further and say a million lefties signed it, and then it was sent to us here at Church Militant. Do you think for one instant it would have any impact here on what we do? Likewise, when some Catholic organization blasts out a plea to "Quick, sign this petition to let Bp. Whoever know whatever," do you really think Bp. Whoever gives a rip?

If he gave a rip, he wouldn't have done whatever the petition is about in the first place. But here's the even-more-problematic issue. Signing a petition makes a person feel like they've actually done something, when, in reality, all they've done is bolster the email list of the sponsoring outfit.

Good Catholics get all outraged, click on a petition and then walk away, again feeling as though they told that guy off. Wrong! Petitions are gimmicks to get your email. Period. If you actually want to do something, then actually do something.

For example, let's turn our guns to the horrible situation in La Crosse, Wisconsin where the bishop there — William Callahan — threw the brave Fr. James Altman under the bus for preaching the truth on social media videos about the evils of the Democratic Party.

Instead of offering some stupid, do-nothing petition, Fr. James Martin, who is as slick as they come, put out his own social media post telling individual people to pick up the phone and email the bishop directly to punish Fr. Altman.

It worked spectacularly. Callahan, every bit a part of the machinery of the U.S. hierarchy and a party man, instantly caved to the pressure from the Left, whipped up by Martin. Notice, however, Martin did not tell his Marxist followers to sign a petition.

He told them to actually do something that would bear fruit. Martin doesn't need an expansive email list so he can keep hitting people up for donations to feather his own nest. Nor does he even pretend that an email list is worth anything. They aren't.

Some Catholic outfits look like they are accomplishing something, when, in reality, they couldn't hold a candle to the efforts of the Marxist. Petitions aren't worth the space they take up on a website. But, returning to the Bp. Callahan situation, LaCrosse got inundated with calls and emails from Jimmy's gang.

Meanwhile, some Catholic petition-pushers got a bunch of new emails for later fundraising. How exactly was Fr. Altman helped by that? And more to the point, which side was more effective about exercising its muscle? It's actually disingenuous to look at horrible situations in the Church as an opportunity to expand your email list, pretending that people being hoodwinked are actually accomplishing something.

Nothing is being accomplished. And all you have to do is look at the Fr. Altman situation. James Martin knew exactly how to play this, and he did so perfectly. He knew bishops are sensitive to public opinion about them. So he put out the word to flood the bishop with strong messages about discrimination and judgment and tone and all that garbage.

It's actually disingenuous to look at horrible situations in the Church as an opportunity to expand your email list.

And of course, predictably, Callahan folded like a house of cards, weak man that he is. And actually, saying "weak bishop" is redundant. Fr. Altman would have been far better served and defended if faithful Catholics would have been ringing the bishop's phone off the hook cheering Fr. Altman, telling the bishop his priest needs to be promoted and praised and held up as an example.

But faithful Catholics not only don't think like this, they also are susceptible to being led down the garden path thinking they have done something by clicking a worthless online petition. This is not meaningful Catholic engagement by any measure. Want to know why we are constantly losing — why we get mowed down every single time an issue arises? Because we are way too soft and malleable.

We don't really understand the devotion and intensity needed to fight back and actually score a win here and there. And, I've got to say it, some Catholic outfits contribute to this weak-minded, short-sighted approach because their first concern is growing their own email list. That's not right.

And not only is it not right, it's also counterproductive. It actually hurts the cause because the petitions do nothing they purport to do. Fr. Altman's cause was not helped by some petition. It moved the needle not one iota. Nor will it.

If you really want to do something, really want to attempt to move the needle, then get up off your couch and call the chancery. Write a letter to the bishop. Round up other like-minded Catholics around you. Join the Church Militant Resistance group in your diocese. Go to the Cathedral and protest the evils going on. Meet privately with priests in the diocese who actually know what's going on and where the bodies are buried.

Expose the scandal. Form a protest aimed at getting the bishop to release the financials of the diocese. Ask how much collection money is paid to attorneys. How much does the communications director make? How much money is in the endowment?

But see, every one of those activities actually requires doing something. It takes work, sometimes hard work. You have to spend time. You have to change your life. You have to get into it with other people.

In short, you have to do everything the Marxist Left does. Get out of this braindead mindset that the Left can create pandemonium in the streets and the Church and all you have to do is spend three seconds clicking on a petition. Get in the fight or drop out. But don't play the comfortable middle thinking you've done something. You've done not a thing for the cause. 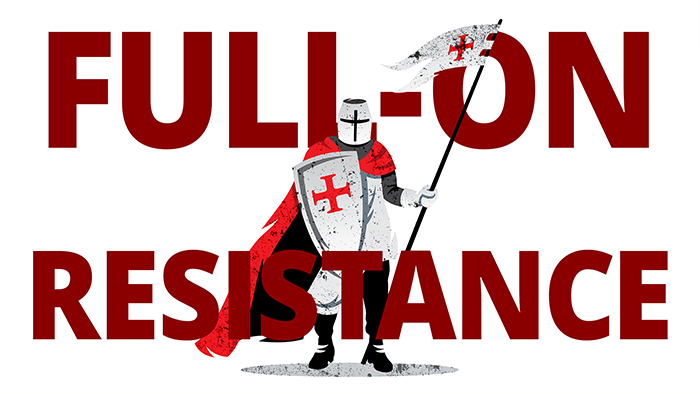 Full-On Resistance
The time has come.