Is there not a Democratic Party talking point the U.S. bishops will not pick up and use to try and pander to voters?

The latest topic they are all fake moral outraged over is racism, which is, of course, the latest media narrative spun by leftists.

Since the Mueller report and his "senior moment" testifying on Capitol Hill has now brought an end to any talk of impeachment and the phony Russia, Russia, Russia droning on, the Left has to create and hammer on a new charge against Trump.

Surprisingly, the U.S. bishops kept kind of quiet on all the impeachment and Russia talk, but the moment the conversation began to switch to something they could become all morally superior about and rev up the engines of the virtue-signaling machine, they got into high gear.

Let's start with Abp. William Lori, the archbishop of Baltimore, the city which came under a blistering assault from Trump on Twitter for being rat-infested and crime-ridden and so forth.

Lori took great exception to the characterization of Baltimore by Trump. Apparently, the archbishop doesn't get out of his palace very much and stroll through the streets.

Trump didn't invent the issue of rats in Baltimore; it's actually been the subject of discussion for quite a while.

For example, former Mayor Catherine Pugh, who is black, walked around parts of the city and was videoed saying, "You can smell the rats."

A documentary was actually produced two years ago specifically on the issue of the rats in Baltimore.

And just last week, a local Fox News affiliate was doing a story on the controversy and got photo-bombed by, you guessed it, a giant rat running through the shot.

This whole controversy erupted because Trump said essentially that Democrat Elijah Cummings should shut up about the usual talking points and pay attention to his own home district, which includes rodent-infested parts of Baltimore.

Of course, the Left immediately seized on the president's comments and converted them into hateful and racist because Cummings is black.

They conveniently overlooked the fact that back in 1999, a considerably younger Cummings took aim at his congressional Baltimore district himself.

That's the problem with grandstanding for cameras. In the age of the internet, the video never goes away.

So a black congressman can say his district is drug-infested, and a black mayor can say she can smell the rats, but if Trump agrees, he's a racist?

But Lori's ridiculous storming of the barricades against Trump was bested by new D.C. Abp. Wilton Gregory — who it seems gets a pass when jumping on the "Trump's a racist" leftist bandwagon because he's black — who, as his first official comments as D.C. archbishop, dutifully attacked Trump, thinly veiled, for racism.

In a recent interview, when asked about President Trump's tweets, Gregory's reply was:

I fear that recent public comments by our President and others and the responses they have generated, have deepened divisions and diminished our national life. In particular, I join my brother Archbishop William Lori in sadness and deep regret for the ways our Maryland neighbors in Baltimore have been denigrated in recent public attacks.

One wonders if bishops like Lori and Gregory are all so hepped up about racism, why they haven't rained down statements about the racism of Planned Parenthood which actually kills black babies wholesale.

But, comments like that would tick off their Democratic Party overlords and, well, we can't have that now.

Also, from a Catholic perspective, since both of them are presumably Catholic, why are they going on about this topic when each of them has a pretty poor record when it comes to promoting or turning a blind eye to the mortal sin of active homosexuality, which sends the unrepentant to Hell?

And, we're pretty sure that the "rodent problem" in Hell is a little more serious than in Baltimore, regardless of what Bp. Barron says.

More shirking of duties, more pandering, more fake moral outrage, more trying to relevant — they need to simply close their mouths and worry about their actual jobs, which is the salvation of souls.

And speaking of closing their mouths, is there a bigger racist in all of America than gay, black CNN anchor Don Lemon, despite the fact that his homosexual partner is white?

If there is a "face" in America who stokes the racism narrative more than this man, you'd be hard-pressed to find one.

The larger problem with this latest drumbeat from Lemon and the Left is that what goes unstated is the presumption that only white people can be racist.

How come no one on the Left ever talks about the racism of blacks against whites. Have they never heard of Al Sharpton, the race-baiting "reverend" whose lies about the Tawana Brawley case back in 1987 actually resulted in people being killed?

Sharpton and the entire extreme wing of the civil rights movement ginned up a completely fabricated story of the rape of a black girl and a resultant cover-up of white men by law enforcement.

It was all proved a total sham, but not before Sharpton led multiple marches for nights on end slamming whites.

By the way, the U.S. bishops didn't release any statements about Sharpton's racism.

And Sharpton is just the tip of the iceberg. Louis Farrakhan not only hates whites, but Jews aren't exactly high on his list either, but you'll search high and low through a list of bishops' statements and come up empty if you're looking for a condemning statement of Farrakhan and his racist Nation of Islam.

Then we have the case of Reverend Jeremiah Wright, Obama's pastor for almost 20 years, who Sunday after Sunday preached against whites, another story the media broke and then immediately back-peddled away from when they realized it would damage their darling candidate, Obama.

And speaking of Obama, who droned on and on about healing the racial divisions in America, when he left office in 2016 after years of actually stoking racial divisions with the Trayvon Martin case and the Ferguson, Missouri, riots to name a few — when he left, 54% of Americans said racial tension had actually increased, and that's according to CNN.

Racism is a horrible thing. It denied the inherent dignity of any person who is a target of it.

But to pin racism on any given race — in this case, whites — is flat out ridiculous. But, it has become the big hammer used by the Left to silence any opposition to their agenda and policies.

If a black man or woman proposes some new law or bill or whatever, and a white man or woman challenges it, that white individual is automatically labeled a racist. This was a near-daily occurrence in the Obama years.

Here's a little lesson the Left should understand: Political conservatives and orthodox Catholics don't oppose your agenda because a black man or woman may be pushing it. We oppose it because it's stupid and evil.

Now, if the U.S. bishops could just understand that point as well, maybe we could make some progress. 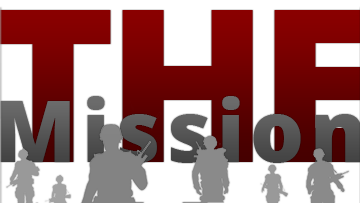 THE Mission
Same as it always was.