The Court demands the archdiocese of Detroit come clean.

What's going on in the archdiocese of Detroit is disgusting.

In short, Abp. Allen Vigneron has given the green light for his legal team to try and conceal evidence which would exonerate Fr. Eduard Perrone.

Quick background: Father Perrone was removed as pastor from the traditionalist parish, Assumption Grotto, last July 4 in a very public way. Announcements were made from the pulpit by Vigneron's men, and his main hit man, Msgr. Michael Bugarin, threw his fellow cleric under the bus, granting an interview to the Associated Press before Perrone had even been informed.

At the heart of the case: Supposedly a charge surfaced from the "repressed memory" of a man from nearly 40 years earlier.

All of the information — the actual truth of the matter — is contained in a file that the archdiocese has been ordered to hand over to lawyers, and has so far refused to do.

Last Friday, AoD lawyers were ordered again to hand it over and immediately said they were going to appeal. They are claiming that the file is protected Church information, dealing with things like Church discipline of a cleric and so forth.

By a strange turn of events, Church Militant learned the identity of the supposed victim months before this case ever became public.

Monsignor Michael Bugarin knows we know the accuser's name because he has expressed his irritation at that fact to various people in private conversations. Since Church Militant knows who the accuser is, the AoD is at a severe handicap trying to keep all this quiet.

We have been in touch with multiple sources connected to the accuser, and they have all confirmed for us that the accuser is not telling the same story that Abp. Vigneron's men claim he is telling. In fact, at one point, under questioning directly from Bugarin, the accuser says he's not sure anything ever happened at all — that he just has a "hunch" that something may have happened.

Bugarin, according to our sources, then pressed and kept pressing the accuser (who isn't really accusing anything, it would appear) to say sexual assault happened. But the accuser maintains he can't say anything for certain.

So what do we have here? An archbishop who has allowed a monsignor with an ideological vendetta against a certain priest to run roughshod over a supposed accuser, publishing charges of sexual assault by the priest that the accuser isn't sure ever happened.

Likewise, sources close to the accuser have dropped the remarkable news to Church Militant that Bugarin was the spiritual director for the accuser for almost one year before this all became public.

That raises the very real possibility that whatever so-called "repressed memory" may have supposedly surfaced during spiritual direction may have in fact been placed there by Bugarin himself.

That is an unconscionable conflict of interest — that the very man prosecuting the case for Vigneron and the archdiocese is the very same man who guided and possibly coached the accuser.

But here’s the game changer, the truth test, as it were: Every last bit of this information is in that file — that file that the AoD is fighting like hell in court to keep under wraps.

That file exonerates Fr. Perrone and proves actual malice on the part of Msgr. Michael Bugarin, and the cooperation of a sitting archbishop.

And what’s more, Vigneron has the ability, even the duty, given all this new information, to absolutely call this sham off — and yet he is letting it continue.

Yet he is letting it continue.

He is allowing Msgr. Michael Bugarin to destroy the reputation of a beloved priest of this archdiocese and is using huge sums of money from the faithful to pay a team of attorneys from the highest-paid legal firm in the state to keep running interference and blocking the truth from coming out.

In an outrageous display of hypocrisy, Vigneron last year preached from the pulpit of his cathedral about the need for the institutional Church to deal honestly and forthrightly, to deal with the truth. His comments were about the clergy sex abuse crisis, but they ring hollow consideruing the evil he has permitted to be visited on Fr. Perrone by Bugarin.

Bugarin, in a revelatory statement to various dinner companions — and apparently the supposed accuser as well — maintains that parishioners at Assumption Grotto have a cult-type worship of Fr. Perrone and that they wouldn't like his parish because they would see it as "protestant."

Bugarin is pastor of St. Joan of Arc in metro-Detroit and has risen to such heights in Vigneron's chancery precisely because he is a party man, attempting to downplay and marginalize anything that smacks of tradition, as well as publicly denying that homosexuality has anything to do with the homosexual clergy sex abuse crisis.

In a radio interview during the Summer of Shame last year, he ripped into the idea that grown men raping teenage boys by the thousands has anything to do with homosexuality, flat-out denying the cause of the crisis.

This archdiocese is a train wreck: unaccountable modernist clerics using the blessing and authority of the archbishop to go after other priests they don't like, using trumped-up charges that they themselves may have placed into an alleged accuser's mind.

Sources close to the accuser tell Church Militant that the accuser is a man in his 50s who has suffered from psychological problems for decades and is on a variety of drugs, and has been for years. He has in fact, according to our sources, not held a steady job for more than 10 years. Given all that, it appears very much that the accuser has been victimized, but not by Fr. Perrone.

The archbishop needs to take his own pious-sounding advice and bring this to an end — now. Call off the lawyers. End the legal opposition. Exile Msgr. Bugarin. Stop wasting the faithful's money. And most of all, own this.

Vigneron has a $200 million fundraising campaign languishing right now that he calls "Unleash the Gospel."

What he needs to do is "Unleash the File." 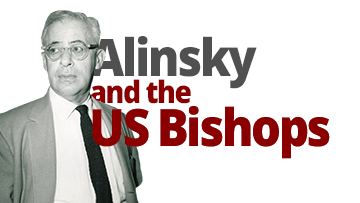 Alinsky and the US Bishops
Decades of lying and stealing from faithful Catholics.