As we've been telling you for years now, the establishment Church is duplicitous as Hell. They have no regard for your souls. All they care about is maintaining the machine. The latest example of this is Relevant Radio.

Here's the case in a nutshell: A short while back, Relevant Radio accepted advertisements from the Biden Campaign that essentially portray him as "St. Joe." Relevant Radio accepted the advertisements because, under current law, they must accept them because they are a Federal Communications Commission ("FCC") licensed commercial broadcast station.

Biden is currently barnstorming through the Catholic world portraying himself as a devout Catholic — as the blood of tens of millions drips from his power-hungry hands. Listeners to Relevant Radio were aghast when word started circulating that Relevant had accepted the advertisements for airplay.

When the rightful uproar from faithful Catholics hearing about the Biden advertisements got really loud, the board of directors held a series of emergency meetings over the weekend and pulled a "fast one" to protect themselves from the ire of listeners.

The board decided to change its status from commercial to non-commercial, which relieved them of any legal obligation to accept any advertisements — political or otherwise. Of course, that also means they won't be getting any more advertising revenue.

When we contacted Fr. Francis Hoffman (who runs Relevant Radio) to inquire about all this, here is the answer we got back in an email from him directly: "No political ads have aired on Relevant Radio owned and operated stations during the current election cycle."

Relevant was willing to do business with a heretic, placing advertisements to deceive Catholics into voting for him.

That is a duplicitous answer meant to protect themselves and provide cover. It's true they have not aired Biden advertisements, but they were planning to air them, as you can plainly see on the agreement between the Biden Campaign and Relevant Radio provided per the Federal Communication Commission rules. Pay attention to the relevant dates on the ad-buy document.

So get the big picture here: Relevant was willing to do business with a heretic, placing advertisements to deceive Catholics into voting for him. When — and only when — word got out, they decided to pull the legal "switcheroo" and become non-commercial and be able to turn down the Biden commercials (and all other commercials of any kind in the future).

It was only the blowback that forced their hand. The trade-off is obvious as well. A decision was made that it would be more damaging financially to accept the Biden advertisements and lose all kinds of donor support as a result than to sacrifice future revenue from all commercials — political and otherwise. Smart call.

In his email response to Church Militant, Fr. Hoffman — also known as Fr. Rocky — even chest-thumped how brave a call it was to dump all commercial advertising moving forward, framing it as a "courageous decision of the Relevant Radio board of directors to stop airing all paid commercials, including political ads, which would have violated the core principles of our mission to bring Christ to the world through the media."

No, sorry, Father. It would have been "courageous" had the board made the decision before accepting the Biden's blood money, not after. You guys took that child-murdering heretic's money to run all his advertisements on your stations, and only after people went nuts once word got out did you suddenly become "courageous."

Those advertisements were created to trick and deceive Catholics about Biden's fake Catholicism. You guys know this child killer is a fraud, yet you chose to accept his advertisements so you would not have to give up all your other advertising revenue.

It was only the outcry that forced your hand. Again, you were fine with running his ads, hiding behind the law that you had to run them, which also allowed you to hold onto your other advertisement revenue. That's rotten.

On the board of directors of Relevant Radio is the all-important Abp. Bernard Hebda of the St. Paul-Minneapolis archdiocese. In addition to being a key man on the board, Hebda is an attorney. So it seems beyond all reason to think he did not have a controlling hand in the decision to drop commercial advertisements — a decision again based on money, not morality.

They accepted blood money from the baby-killing Biden Campaign and comingled it with your donations.

Hebda, you will recall, was the same archbishop who actually ordered his priests to not vote in the primaries so media outlets could not discover their party affiliation. This is a cover-up dude. A man of the "Church of nice" machine. Don't rock the boat. Keep the status quo. Never denounce evil unless there is a financial gain to be made doing so (or unless you can at least pretend you're "courageous" when, actually, you are just the opposite). This whole decision was about money, nothing else.

That board meeting over the weekend was probably loaded with financial spreadsheets scattered all over the table and lots of calculators burning up. There was not a thing courageous about it. And to pretend it was is a further deception. We've been saying it for years — the Catholic media establishment cannot be trusted with your souls, your formation or your money.

They accepted blood money from the baby-killing Biden Campaign and comingled it with your donations. Faithful Catholics, who are naively brought along to think that nice, sweet-sounding platitudes are all you need, give their hard-earned money and get duped. The board of directors made a purely financial risk-benefit decision, nothing more.

Relevant Radio should be denouncing this heretic and cutting off all ties with those who help him spread his evil. But when you look at the list of bishops on the episcopal advisory committee, you see why that would never happen. It reads like a rogues gallery of cowards and complicit clergy, some of whom want Biden to win.

This is just one more brick in the wall of everything wrong with Catholic establishment media. 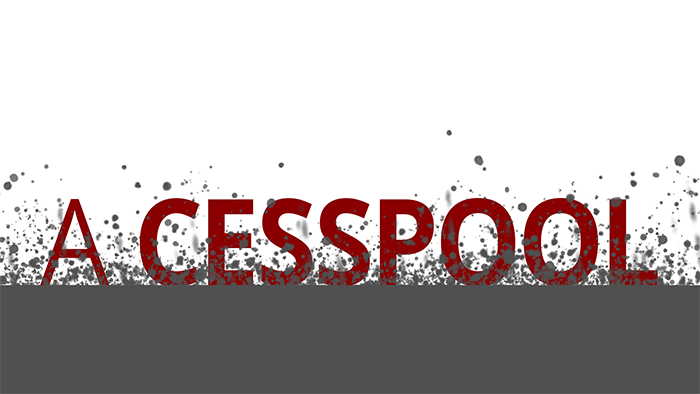 A Cesspool
Apologies to all cesspools.