Time for a rebirth.

No matter how you look at it, religion in America is dying.

In fact, the number of people who now say they have no religion has almost tripled since 1991 and now stands at just about the same level as the number of Catholics and Evangelicals.

According to the General Social Survey, a long-established metric of Americans' opinions and practices across a wide spectrum of topics, the "No Religion" crowd is 23.1% of the population, Catholics are at 23% and Evangelicals account for 22.5% as of 2018. That is a statistical tie.

Mainline liberal Protestants have taken a massive hit since the day of the WASP establishment, a two-thirds decline to just roughly 11% of all Americans.

So look at the board, with everything on it at the same time.

Together, that represents four out of every five Americans in one of those categories. The remaining Americans are scattered across other religions like Judaism or Islam.

Catholicism has seen what appears to be a steady erosion, decreasing 4% since 1972.

While that rate of decline is somewhat small, certainly compared to mainline Protestantism with a whopping 68% decline, it still does not bode well for the Church.

While it is true Catholicism is the single largest religious body in the United States, it is not on track to maintain that pace. Less and less are becoming or remaining Catholic, a fact borne out in the drop of the overall percentage of U.S. Catholics from 27% to 23%.

First: For the past roughly 10 years, hapless U.S. Catholic leaders have been putting all their eggs in the New Evangelization basket with non-Catholic programs like Alpha. That has obviously failed, as even Lansing Bishop Earl Boyea confessed in a letter to his diocesan priests last year.

Secondly: With the constant stream of illegal aliens into the United States, again, another focus of the U.S. bishops, reports indicate that whatever percentage arrive here as Catholic, half of them leave the Faith within one generation.

Something is seriously sick in the Church.

If you look deep into the numbers, a tsunami can be detected picking up huge force. Young Catholics are jumping ship at a frightening rate, with a huge percentage deciding to leave between the ages of 10 and 18.

Older Catholics — mostly those born before Vatican II — are the most likely to have stayed, but they are dying off, and within 10 years, there will not be many left.

All this points to the reality that the Church is undergoing an enormous change — shrinking, becoming less relevant overall and having very little appeal to future generations.

Between sex scandals — mostly homosexual in nature — and now a string of ongoing state and federal investigations, the much-talked-about possibility of a U.S. Justice Department RICO investigation could be what finally pushes the Church over the edge.

It's taken decades of corruption and dissent to arrive at this point. The treachery of many leaders — treachery against the faithful, the Faith and ultimately Jesus Christ Himself — is finally catching up.

Many of those — in fact, most — of those responsible for this have either died, are retired or approaching retirement in the next handful of years.

They have left behind a trail of tears. When they were in grade school or high school back in the 1950s or so, there was much talk about how America was on the verge of becoming a Catholic country.

But with the infiltration of Communists, homosexuals and theological dissidents, almost all of which was unknown at the time to rank and file Catholics, that possibility never got out of the gate.

It was sabotaged by the demon and his human offspring before it ever got off the ground. For those remaining faithful Catholics, the challenge is enormous.

Only the Catholic Church was established by Christ, and, therefore, only it can lead to salvation.

The forced retreat of the Church on the cultural scene, its movement toward being irrelevant, is going to have to be countered with an even greater resilience than was needed when Catholics first came ashore during the mass migration from Europe.

But for that to happen, the purification inside the Church must happen. The treachery, the cowardice, the incompetency, the emasculated men, the politically minded men in charge, all of it needs to be faced down.

Those are the very elements that have caused this meltdown, which is about to go over the cliff in the next handful of years.

We need to realize that for all intents and purposes, we will essentially be starting over — not quite, but pretty darn close.

Most Catholics sitting in the pews — the one in five who still do — either don't know or don't agree with the Church's teachings, and emasculated, non-offensive, theo-babble garbage like Alpha is not the silver bullet.

When it comes time to finally say goodbye to the squishy, whiny Church of Nice Catholicism, it won't be a minute too soon. Stalwart Catholicism, as it has always been, is how a culture is won in the long run.

We know. We did it before, and the world was given Western civilization.

We did it once, and though it took centuries, we can do it again. 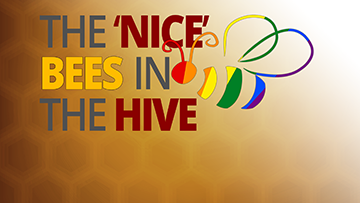 The ‘Nice’ Bees in the Hive
And they can become dangerous.