That's an apt thought as faithful Catholics lament the state of the Church. Things are so bad and so overwhelming that a kind of paralysis sets in, which can easily lead to a quiet despair that "nothing can be done." But that's not true, not even close. There is much that can be done, but all of this mess and our actions in response to the mess must be viewed realistically.

First, the crisis in the culture, which is little else than communism rising, is a direct result of the unfaithfulness of the Catholic Church, particularly Her leadership — but with plenty of blame to pass around to us laity as well.

So when you look around the world and see it collapsing, know that the Church collapsed first.

The corruption within the hierarchy became the launching pad for the greater societal evils because the Church was established by Our Blessed Lord to be the sole path to Heaven and, being so constituted, is the only force on earth that can actually push back against and defeat evil. So when you look around the world and see it collapsing, know that the Church collapsed first. Her guardians exchanged the good of Heaven for the pleasures of earth.

Second, the crisis in the Church far precedes the fallout from Vatican II. The Second Vatican Council has become a kind of scapegoat in the minds of many Catholics who unthinkingly look at all the confusion following Vatican II and attribute it to Vatican II.

That is a very simplistic and wrong notion. The fallout from the council was able to be generated in the first place because, behind the scenes, the seeds had already been planted for decades by modernists who cleverly hid within the cracks and crevices of the Church like termites gnawing away. All that happened after Vatican II is that they came out into the light.

Third, if you go into this battle to help restore the Faith without realizing what you are up against, you will become despondent. Simply accept the fact that the corruption and cowardice across the board within the hierarchy has transformed it into an international gay-crime syndicate. As Church Militant has been told repeatedly by officials and victims who come into close contact with this syndicate, it's worse than a mafia. That is your starting point. You cannot go into battle unaware of your enemy.

And within the hierarchy itself, do not talk about "good" bishops. A cowardly bishop who still privately believes the Faith but remains largely silent about the evil within the episcopate does not qualify as a "good" bishop. He qualifies as a "not active promoter" of the evil. Good bishops die for the flock and announce the truth because anything short of the fullness of the truth damns souls, including their own.

So in approaching bishops in your mind, you must first think in terms of wicked, evil men, such as McCarrick, raised to the episcopate through his influence and trained to lie, cheat, deceive, in some cases, rape and, in all cases, cover it up. Then, when finally caught, they deflect and cut secret financial deals with your money.

The other bishops are the cowards, those who, through their own lack of courage, will be the first damned, as St. Paul and St. John tell us. They are the ones who have permitted the wicked bishops to ascend to these great heights by going along with whatever asinine "brother bishop code" or secret handshake they have.

Many of these men, nearly all of them products of deficient seminary training back in the 1960s and 1970s, are malformed in theology. It doesn't matter if they are polite or soft-spoken or great to have over to your cocktail party, men like this will abandon the faithful at the first sign of trouble — just look at their ongoing, terrified response to the COVID craziness.

To whatever degree they may personally believe the Faith, they don't believe enough, and that's the point. To follow Our Blessed Lord, even as a lowly, insignificant layman, means total abandonment of self. Of course, that plays out over time, but the point is that we must be at least heading that way. Point to any bishop in the United States who is doing just that (and by "just that," we don't mean giving an occasional sound bite or making a social media posting, but one who is standing up out loud and denouncing the evil within the ranks of his own brother bishops).

Wicked men enabled by cowards run the Church; accept that reality and come to terms with it. And, please, no comments about Pope Francis down below. The pope did not fall out of the sky. It was this same ecclesiastical swamp that he emerged from as well. For years, Church Militant has been saying that the constant pounding on Pope Francis is just low-hanging fruit by a bevy of social media-type Catholics to generate clicks.

But when it comes to the real nitty-gritty of attacking the beast itself, the episcopate from which Jorge Bergoglio emerged, these "YouTube Catholics" are nowhere to be found. They don't organize on-the-ground efforts to help facilitate awareness. They don't put in the time and excruciating effort to investigate individual cases of episcopal corruption. That work is too hard and doesn't gin up anywhere near the number of likes and clicks and payments and emails as other content does. It's much easier to just strike for the high-visibility, low-hanging fruit of Pope Francis.

All of that is part of why Church Militant began its grassroots movement that we call Resistance. It was very clear to us that all this constant bellyaching about Pope Francis was accomplishing absolutely nothing, at least for the Faith. All it does is accomplish free publicity for the clickbaiters. But we aren't interested in clicks. We are interested in souls being preserved from this evil swamp in the diocesan and parish levels where the real work of the evil is happening with gay priests, malformed RCIA directors, chanceries full of woke idiots pretending to be Catholic and so forth.

Even as we speak, bishops all over the United States are denying people their freedom of conscience regarding the so-called COVID vaccination, sometimes forcing Church workers to submit or get fired. So much for compassion, tolerance and dialogue, right?

And that's just one obvious example. The vax hysteria was preceded by a near-total abandonment of the Faith — in liturgy, morals, finances, doctrine — you name it, so that is where whatever effort that can be expended needs to be expended.

Here's a short list of successes that Church Militant Resistance has recently had:

It's true that no one person can do everything. But you must do whatever you can. Spiritual battles very frequently play out in the material world.

It's true that no one person can do everything. But you must do whatever you can.

This is why the Church Herself encourages both the spiritual works of mercy as well as the temporal works of mercy. If you are able to do more than pray, then you are obligated to do so. Late next month, Church Militant Resistance is sponsoring a "Boot Camp" in Southern California and is inviting you to attend it. Please click here for details, and please consider attending.

The main point is to go into all of this much more in-depth with knowledge and training on what and how to do what needs to be done in your parish or diocese. This kind of grassroots organizing is something the forces of darkness in the culture have been absolute masters at over the decades in ginning up discontent. They have taken serious advantage of the natural disposition of good Catholics and conservatives to do nothing.

Like the cowardly bishops, the laissez-faire Catholic has quietly sat by and enabled the wicked in the culture to overrun it. It's time to resist. Resist it all and push back hard.

Please join us in SoCal for the Church Militant Resistance Boot Camp. 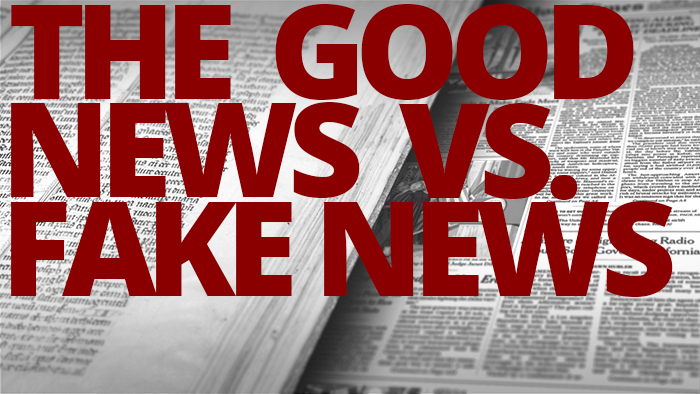 The Good News vs. Fake News
It's all part of the same big picture.