May 18, 2022  0
Podcast Available for Premium Subscribers

The assault against the RINO leadership of the GOP is now on full display as the primaries move into high gear. There are quite a few dynamics at play here, but the 60,000-foot view is pretty simple. Rank and file Republicans feel betrayed by their leaders, and, frankly, they feel that way because they have been betrayed.

It's extremely similar to what's going on in the Church. The parallels, in fact, are almost eerie. Catholics who actually believe the Faith feel betrayed by leaders who obviously no longer do. And while Catholic laity obviously can't vote bishops out of office, they can militate against them, expose their infidelity, make life generally annoying for them — all in the hopes of unmasking their wickedness so lukewarm Catholics wake up, realize they've been deceived and then actually learn the Faith.

Over in the GOP, it's a little more direct line of attack. In fact, it's all-out war. All across the country, RINO killers are running for office, with establishment types in their sights. Down on county levels, even precinct levels, the shock troops are gathering and drawing up their plans. At a recent GOP meeting in Macomb County, Michigan, it was all the revolutionaries, not a RINO in sight.

All the energy, in fact, is on the antiestablishment side, fueled almost entirely by the question of election integrity — and the reality that, when the chips were down, in the face of the 2020 steal, the leaders refused to do their jobs.

All across the battleground states, GOP establishment types betrayed their constituents, refusing to hear the pleas of regular voters. They were told to actually believe Joe Biden got 81 million votes. They were told to believe that voters all over the country voted Republicans into state and federal office in record numbers, but also pulled the lever against Trump.

They were told to believe that every single historical predictor of the outcome of presidential election cycles was simply wrong this time around. They were told to believe that all the evidence, sworn testimony from thousands of eyewitnesses, huge discrepancies in voting patterns, statistical anomalies in every key area in the country — all of that was wrong and meant nothing. It wasn't even worth exploring and should never be questioned.

Their wealth insulates them from consequences.

And all of this weirdness actually began on election night itself, as Church Militant covered live as events unfolded. Brushed aside, told to sit down and be quiet, to mind their place, to accept the results of a theft, the rank and file did something the establishment never anticipated — they refused. They refused and they quietly fumed, organizing their own investigations, holding their own hearings from Arizona to Michigan, from events in Texas to Trump rallies seemingly everywhere, the peasants began organizing.

And their target became the GOP elites, who dumped on them and, accordingly, they set their sites on the now-in-full-swing 2022 midterms. At the head of the pack on all this is, of course, Trump, who has been endorsing rank-and-file anti-RINO candidates on a daily basis. Yet even there there have been some rebellious stirrings even there. Even Trump isn't given a pass by his supporters if he appears to step out of line and endorse someone who's considered a potential RINO — like Dr. Oz in Pennsylvania.

But the Trump endorsement is considered political gold right now, with a remarkable showing of more than 50 wins against only one loss (as of Tuesday when this Vortex is being recorded). With key primaries this week and next week, things will come much more into focus as the question gets answered — is Trump king of the Republican party? Right now, there's not even scant evidence to suggest anything but that.

However, as we all know, establishment types never just go quietly into the night, accepting defeat and just retiring. They have spent decades constructing the establishment, mostly for their own personal gain (just like the bishops), and they aren't about to surrender.

In Michigan, for example, led by Betsy DeVos (who used to be Trump's Secretary of Education) and the DeVos family's enormous wealth, a counterrevolution is already underway, another attempt to ignore and crush the little man.

Church Militant was smuggled a copy of the secret invitation,

To that end, GOP royalty in Michigan — 17 families — held a secret meeting in one of the wealthiest communities in the state to strategize how to pool their money and defeat all the candidates in the state Trump has endorsed. Church Militant was smuggled a copy of the secret invitation, which was so secret that organizers would not disclose in writing the actual location. You had to call to get that.

They brought in Mike Pence practically under the cover of darkness, knowing how much he has become the poster boy for being a traitor to the cause of the little man. And this is no mere reactionary group. It is a confederacy of the richest Republicans in the state, who are determined to not let Trumpism take over in Michigan. Over the past few elections, these 17 families have contributed close to $100 million to establishment candidates, with the DeVos family ponying up $60 million of that.

Safe behind their walls and guarded compounds and country clubs, the elites of the GOP don't care what happens to the little people. Their group, which dubs itself the Michigan Opportunity Alliance, has been in existence since 2014 and was instrumental in helping get Democrat tyrant Gretchen Whitmer elected governor in 2018. Group members supported the wimpy, unexciting, typically boring GOP establishment type, state attorney general Bill Schuette — who got creamed by Whitmer, 54–43%.

But see, the establishment doesn't really care. Their wealth insulates them from the consequences of their actions. As Whitmer showed her true Marxist colors during COVID in this state, sending thousands of elderly to their deaths in nursing homes, forcing everyone into brutal lockdowns, facemasks and all the rest of it, the GOP elites went about life as normal.

Their servants went to the grocery stores for them. Their gatherings went on as planned behind their high walls. Nothing changed for them, nor, for that point, did it change for Whitmer, who routinely disobeyed her own executive orders and did whatever the heck she and her family pleased. There is no discernible difference, in fact, between the RINOS and the Dems, and it is exactly that which is causing the rebellion, the civil war within the party.

Biden and his idiocy have set the table for a massive red wave in the general elections in November. In the meantime, Republican peasants first have to overcome their crooked leaders, who have betrayed their interests for decades. Just as in the Church, it's not enough to just call yourself a Catholic. It matters what type of Catholic you are. 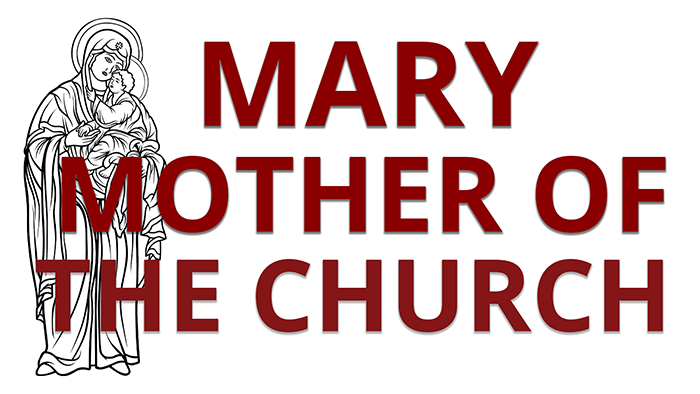 Mary, Mother of the Church
The One True Faith.