But a victory for the homosexual hive in the hierarchy.

A little caution before we begin: Some of this Vortex is a little rough.

Yesterday's confirmation by the Vatican of the selection of Atlanta Archbishop Wilton Gregory to replace the lying, disgraced Cardinal Donald Wuerl as archbishop of Washington, D.C. is revolting — as in something which should be revolted against by the faithful of D.C.

For six months now, the faithful have been holding public prayer vigils and pleading with Rome for a good bishop following the disgusting revelations of Donald Wuerl's involvement in transferring around homopredator priests, as well as lying about what he knew about McCarrick, and then getting caught lying about lying.

But this is how the homosexual hive in the Church works. Homosexualist bishops and their allies in the episcopate promote and advance each other in a business as usual method of covering for each other's sins and crimes once they leave office.

Wuerl was selected by McCarrick to replace him in D.C. because he needed a man who would cover up his own filth once he was no longer in direct control in D.C.

So Wuerl was more than happy to step in and assume control in exchange for protecting McCarrick's backside in case anything got questioned.

What the homosexual hive in the hierarchy did not anticipate however was news about McCarrick's decades of sexual assault and molestation and predation of seminarians becoming public.

Try and as they might try to prevent it, the dam finally broke and all sorts of news emerged implicating not just McCarrick, but many of them as well.

Suddenly, the lying, cover-up crowd was being exposed. Men like Wuerl, Tobin, Myers, Farrell and Cupich all discovered their private connections to McCarrick and his evil splashed all over the front pages of newspapers all over the world.

They went into desperation mode and did the only thing cheats like them can do. They lied, over and over again, publicly.

And then, Archbishop Viganò exposed their lies in his testimonies of last summer and fall where he named names and flat out said Wuerl was lying. No wonder there are reports there's a contract out on his life, and he is in hiding for fear of it. The homosexual hive in the hierarchy will stop at nothing to protect themselves.

Which brings us back to homosexualist Archbishop Wilton Gregory, a protege of homosexualist Cardinal Joseph Bernardin of Chicago, under whom Gregory was a high-ranking aide.

Bernardin created a gay parish at Resurrection, celebrated the opening gay Mass there, was happy to see a sacrilegious gay banner hung so as to block the view of the crucifix.

As a quick aside, it was this parish and this banner last year which caused the scandal of Fr. Paul Kalchik having to flee into hiding after he and some parishioners discovered it and burned it.

Bernardin established the first gay office in any chancery in the United States, AGLO, which is still going strong in Chicago, subverting the Faith. Bernardin actively advanced scores of homosexual men both to the priesthood as well as the episcopate.

Various knowledgeable sources, in fact, point out that at the height of what is termed the "Bernardin Machine," he himself backed close to 100 men for bishop who were gay, thus delivering operational control of the Church over to the homosexual hive in the United States.

In fact, in many instances, if a man was not part of the hive, he stood very little chance of being consecrated bishop, or if he did slip through the cracks somehow, he would never rise to much prominence if Bernardin had any say in it — and Bernardin had plenty of say. This is the prelate under whom Wilton Gregory was trained and then was promoted through the system.

When he arrived in Atlanta in 2004, it didn't take him long to start "gaying" the archdiocese, implementing what he had learned at the foot of the queen bee of the hive in Chicago. He has routinely ignored complaints of faithful Catholics about Atlanta parishes participation in the city gay pride parade.

He has welcomed and offered Mass for a group known as Fortunate Families, a pro-gay "Catholic" group totally opposed to the Church's teaching on homosexuality. These and a string of other gay initiatives makes him completely unfit for the episcopate, let alone to lead D.C. Catholics.

And consider this: Donald Wuerl is on the Congregation for Bishops in Rome. Gregory's nomination to his new post would not have happened without his blessing.

Wuerl, during his post-resignation months, has been in Rome almost every other week, where among other things, he has been petitioning and campaigning for Gregory to assume his former seat.

That means, given Wuerl's past of lies and deceptions, Gregory understands that his role for the next four years until his own mandatory resignation at age 75 must be handed in is to cover for Wuerl.

With what looks increasingly more and more like a U.S. Justice Department RICO investigation becoming a reality, Gregory may soon be experiencing buyer's remorse at his latest placement.

But one other point needs to be made. In a little over two years, the homosexualist, lying, cover-up Cardinal Donald Wuerl will be eligible to vote in a conclave. At age 80, no cardinal can vote.

Wuerl, in getting Gregory into his former seat, not only guarantees his own rear end will be covered when U.S. attorneys start snooping around, but it also means that at the next consistory, Gregory will more than likely be named a cardinal by the Pope, since he is archbishop of D.C., thus assuring that a member of the homosexual hive will continue keeping his seat in the next conclave.

Anyone who thinks any of this is going away soon simply doesn't understand the reality of the situation. The hive is in control, and expecting change and correction from within is naive. 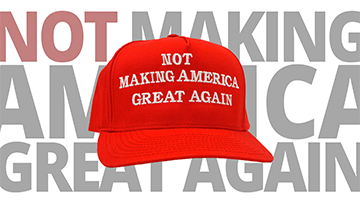 (Not) Making America Great Again
Too many US bishops are socialists at heart.