They are more closely related than you think.

As we reported on our Evening News two nights ago, Church Militant is in receipt of leaked documents from the USCCB that reveal there will be nothing done or said about pro-abort child killers receiving Holy Communion. Likewise, it is stated explicitly in the letter that the press is not to share these documents. Too late on that score.

Bishops, you need to realize there are many close to you who simply reject your cowering and evil but who live in too much fear of you all to confront you about it. But we have now reached a point in the life of the Church (in the United States certainly, if not the world) where faithful priests can no longer withhold the truth out of fear of being sacked by their bishop.

Church Militant reports on these stories nonstop because, frankly, they happen nonstop. Truth costs. And declaring the truth almost always comes with a cost. The more direct the truth, the higher the cost. Just ask St. John the Baptist.

Truth costs. And declaring the truth almost always comes with a cost.

That said, it is time for a revolution in the Church. Not against the Church Herself, of course, for She is the indefectible Bride of Christ. But revolt against those members of the hierarchy who act in defiance of the Church's teaching has become an absolute necessity now. And not against their office and authority, but against their abuse of that authority.

The facts are abundantly clear: The bishops are in woeful need of correction, and they are in need of it immediately. Those who proclaim the truth are going to have to pay a dear price. Welcome to a fallen world. But if hundreds and hundreds of you priests simply get up in your pulpits and denounce the evil in the hierarchy, then what are they going to do? They can't ship hundreds of priests off to St. Luke's for "anger management."

Likewise, they can't rip hundreds of you out of your parishes. They can't run the show sufficiently with hundreds of you suddenly gone. This is specifically why they are picking you off, one by one, a little at a time. That keeps the situation "manageable for them."

And on this point, please consider this: You actually have a duty to denounce the evil and the sins of omission of your bishop and the hierarchy at large. Too many of them feel they are above correction. They are wrong. Paul corrected Peter. But if no one offers correction to them (for their sake and the sake of the people), then how do they escape damnation?

Consider that you are bound in conscience to say to the bishops in all charity that what they and their brother bishops are not doing is reckless and demonstrates a wholesale disregard of Our Lord's Real Presence. Take a proper stand — and that begins with defending the Church's teaching and Our Lord, Jesus Christ Himself.

To do nothing is a cowardly approach. It is emptied of any charity toward the pro-abort public child killers and the marginally faithful who see this "approach" and determine for themselves that you all don't really believe. What else could they reasonably conclude? Faith without works is dead.

What on earth (or in Heaven) could a crowd of divided bishops possibly produce as a document about the Eucharist that would add to the enormous body of work by the greatest intellects who have ever lived? The doctrine on the Real Presence does not need any more documents about it; just cut and paste St. Thomas or any one of a hundred other Fathers or Doctors of the Church. What is needed in this time and space is a defense of the Real Presence.

This new "document" will not defend it. However insightful it possibly might be (which is doubtful since the tremendous insight of the saints would be impossible to surpass), it will accomplish nothing of substance. Most of the baptized don't even listen to you, much less sit down and pore over some billion-word document. The actions (not preachings, but actions) of decades of bishops have obliterated faith in the Real Presence.

Given that we see Communion in the hand, child killers waltzing up to receive, shifting the tabernacle out of the sanctuary and a host of other things, when is the last time you bishops personally held public adoration and benediction on any consistent basis? None of you needs the worthless (non-authoritative) actions of the USCCB to stand up and say, "There will be no sacrilege in my diocese."

If a killer were to break into a man's house and the husband/father bolted instead of defending his wife and children, how could anyone of sound mind say that he loved his family? Did he have strong feelings for them? Sure. Did he "love" them in all the good times (and even some difficult times) and enjoy them and their company? Very likely. But when the rubber hit the road and his life was on the line, he abandoned them. That calls into serious question precisely the nature of his love for them in the good times.

Shepherds, you have a duty to the souls of those committing sacrilege and those witnessing it to announce to them publicly (since it is a public desecration) that they are on the road to Hell. And we faithful and your priests have the duty to say to you that, not only are you on the road to Hell, but the demons will save their worst tortures for you since you occupied the highest offices on earth.

Your fall from grace, which involves the very serious sin of omission, will render your judgments the most severe of all humanity. You have the grace of office, yet you refuse to exercise that office in defense of Our Blessed Lord Himself. As Our Lord said to the Pharisees, who were much lower than you, "How can any of you escape damnation?"

Please, please, for the love of Truth Himself, state exactly what needs to be stated, publicly and directly. You do not need any permission to do that. Do you not realize your personal and eternal fate depends on this? Our Lord has brought you to this point. The choice is now yours to be Peter or Judas. Be Peter.

My good priests and deacons, stand up in those pulpits, and say what needs to be said. Whatever happens, happens. In the next life, you will stand before the throne of judgment and be able to say exactly what St. Nicholas said to Our Blessed Lord and Our Blessed Mother when they appeared to him in his jail cell at the council of Nicaea. Bishop Nicholas had hauled off and decked Arius for promoting the heresy of Jesus not being divine. He was thrown into jail and had his symbols of office taken away from him. As he sat there in the dark that night, Our Lord and Our Lady appeared to him and asked, "Nicholas, why are you here?" He answered them, "Because I Love You."

The Eternal High Priest and His Holy Mother handed back to him his symbols of office, and he went on to be canonized. My dear fathers, your ministry can be taken away. Your priesthood cannot. A priest in Heaven or a priest in Hell, you are a priest forever, according to the order of Melchizedek. 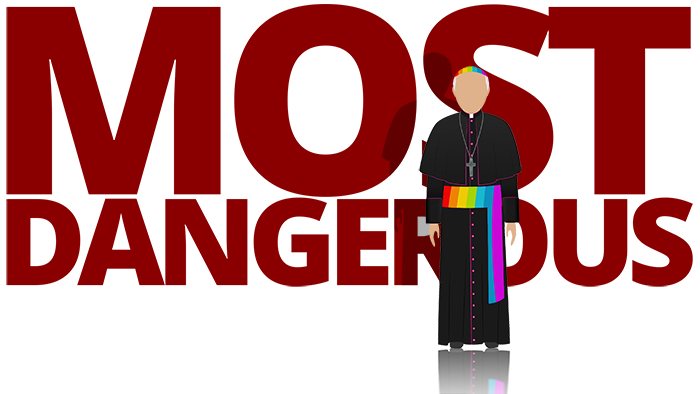 Most Dangerous
Nothing else even comes close.